A Chat With Youth Killed It

On the second to last show of their run with MassMatiks, we caught up with vocalist Jack and bassist Josh from Youth Killed It to talk about their debut album, new single, the UK rock scene and plans for the future.   Your album Modern Bollotics has been out for five months now, how has […] 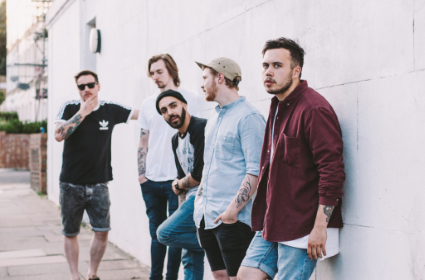 On the second to last show of their run with MassMatiks, we caught up with vocalist Jack and bassist Josh from Youth Killed It to talk about their debut album, new single, the UK rock scene and plans for the future.

Your album Modern Bollotics has been out for five months now, how has the reaction been in that time?

Jack: It’s been a bit ridiculous, we weren’t expecting the response we got. We got a lot of radio love from national stations, a couple of plays on [BBC] Radio 1 and it’s all a bit surreal. When we put the album together it was meant to be just for fun and then we got interest from our label Rude and we had a step back into realising people actually care about this.

Josh: We were seeing a lot of love on social media but it was always from people we know and friends of ours, which is cool but after we put the album out we found people we’d never spoken to before were tweeting us or messaging us saying it’s great. That was something new for us and we’re still taken aback by it.

Jack: Luckily, we had a really great campaign with our label putting out so many singles and videos before the album dropped, whenever a new one dropped the last one would still be in push and that just carried over into the album. It’s been super positive from what we’ve seen and we’re really happy.

Most recently you dropped a video for the single Islands, can you tell us about that song and the video?

Jack: It was written around the time of Brexit and with all the stuff going on politically in the world, I felt like I didn’t want to be around anyone anymore, it was a really rough time because everyone had an opinion and was being so cut-throat. I just felt like “you know what I don’t like people, I just want to be away from everyone”. For the video, because in the lyrics I mention Tom Hanks and Castaway we did a little parody to put to the song. We shot it on a beach near where we live, it was a very DIY job but it was good fun.

Josh: We had a great director called Ray Roberts and he was ridiculously good. We used to just do our own videos and we were always happy with them but this guy Ray came in and it was next level.

Jack: He had professionalism and we’d never heard of that.

Winding the clocks back a bit, you guys started off as Under The Influence, can you explain how Youth Killed It came to be and the decision to totally change direction?

Jack: In Under The Influence, the guy I started the band with decided to leave, from a young age he was always very adamant in what he wanted to do in terms of sound and I just wrote to what he was listening to. When he decided to leave I thought ‘I want to pull it back to the roots now, I want to do more indie-rock’ because that’s what I’m more into. So, we decided to change the name, start fresh and do something similar but polar opposite in terms of heaviness.

Josh: It was one of those situations where after years of doing the same thing we said ‘actually we don’t enjoy this as much anymore’ and as soon as we started Youth Killed It we were like ‘it’s great to be in a band we love it’. It’s a cliché thing to say but it’s for us, if people love it great, if we had no one turn up to a show we’d think ‘brilliant, band practice’.

Youth Killed It seem quite flexible in terms of genre, do you think that’s the best way to be?

Jack: It has its pluses and minuses because being one sound means you instantly fit bills, with us its always been a case of ‘where do we fit in?’, we wanted to play with more indie bands but we got picked up by more rock people.

Jack: The nice thing is we’ve been going from playing with quite heavy bands like MassMatiks and The One Hundred to then playing with indie bands and some punk bands as well.

It’s fair to say fun is right at the heart of your band but there are serious themes that run through Modern Bollotics as well.

Jack: I’ve always found comedy to be the best way of dealing with any situation, having a sarcastic twang helps to get the issues away. We live in this ‘man up’ culture and I don’t agree with it at all so we take the mick out of the way that comes across. It’s like you can’t be a man with feelings and I tried to relate that in a fun way but with a serious undertone. When I write lyrics, I like to have a conclusion, I like it to be very direct so no one can misinterpret it. I also like it to have that juxtaposing quality, like in ‘Islands’ where it’s got a really pop sound but the lyrics are quite dark.

Josh: It’s a very serious world that we live in right now and you can’t ignore the issues, but like Jack said his way of dealing with that is through comedy. It’s for our own understanding as well not just for the song, we try to make it fun because that’s how we do things.

Do you find it’s a fine line to walk without being labelled a ‘funny band’?

Jack: Totally, I’m a firm believer music has a lost a bit of its fun element. When I grew up you had bands like Blink-182 and Bloodhound Gang that were always fun and silly, there was a lot of bands like that out there, even Limp Bizkit and Blur had that fun vibe to an extent. There is that fine line of whether you’re going out there to be like Steel Panther as opposed to if you’re actually writing about serious issues. It’s a scary line to walk, but if you can make someone smile or make their day then you make a connection.

Josh: The comedy element is more apparent in our live shows, Jack will throw some dad jokes in there and general nonsense. I remember watching Zebrahead in Paris and their whole live show blew me away, I saw the impact being a fun band and having a party could have.

How does this translate live, do you see a lot of smiles out in the audience?

Jack: I’ve had some tough crowds, some very tough, but eventually if they’re not laughing with me they’re laughing at me. Which is kind of point, I want people that come to the shows to feel like I’m taking the piss out of myself so they come and get involved.

Josh: It knocks the barrier down between band and crowd, it shows people that you’re human.

How do you feel about the UK rock scene right now, what excites you and dismays you about it?

Jack: What excites me about it?… Not a lot really, I like the bands coming through but I feel like the gap between local bands and bigger bands is huge now, I think it’s lost its sense of community. I went to school with a band called Deaf Havana and watching them come through with You Me At Six helping them and then We Are The Ocean and Lower Than Atlantis, they were all best mates and they all helped each other, the scene was healthy. Nowadays it feels harder, maybe that’s just the internet age. What excites me though is the cross-genres, like playing with MassMatiks and The One Hundred, I like the way they bring it. Rock music has to evolve and it is evolving.

Josh: It went through a bit of a dip where people weren’t going to shows, now they are but that brings me on to the bad point which is the closure of small venues. Communities are fighting for them but it’s still a problem that could cripple the scene.

Jack: Seeing what things like Spotify have done for us though, adding us to hot new band playlists and stuff has been ridiculous. Before we were hitting ten thousand plays on a song, we’ve got one on nearly two hundred thousand now thanks to Spotify, that’s just from them seeing an interest and supporting local bands. Once you get a certain amount of streams radio become interested, everyone becomes interested. I feel, with the rock scene, that will be the final stepping stone between the big bands and small bands.

What’s next for Youth Killed It?

Jack: There may be a new release, that may contain a few songs in the new year. After these gigs, we’ve got a few shows coming up. We’ve got a headline show at the Hoxton Bar and Kitchen in London. Then we’ve got a Halloween show in Norwich, at The Owl Sanctuary, which we’re really looking forward to because we get to dress up and have some fun. Then it’s quiet time because we’ll be writing. There are a few songs knocking about and we’re very interested to turn that into something very fast and very soon next year.

Some fun questions to end, if you had to choose between raps or riffs in one of your shows which one would you pick?

Josh: Rap, it can be spoken word.

Jack: A spoken word set and an apology.

Who would join you on stage for your dream collaboration?