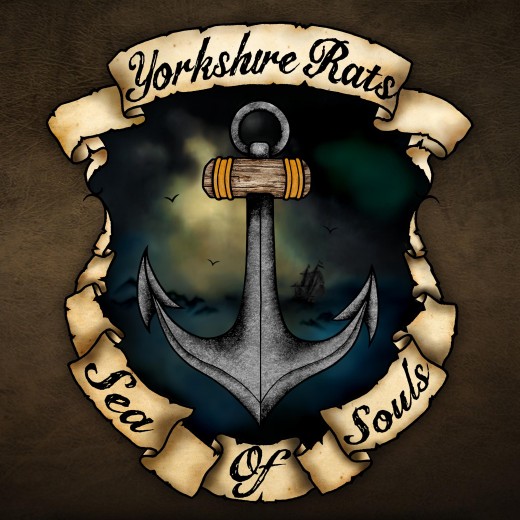 After being on hiatus since 2008 Leeds Punk outfit Yorkshire Rats have come back in style in the form of the new record ‘Sea of Souls’.  From what I hear the band has been through some rough times throughout their career and after several different line-up changes the 4 piece now consists of Don Mercy, Kurt Alexander, Matt Fell and Chris Furness.  Sea of Souls was released 23/03/2015 on Indelirium records and is already getting a good reputation, so I was excited to have a listen.

Having not listened to the band before or been to any shows my first impression was that this was a band rooted within street punk due their previous success and comparisons but as soon as I heard the title track ‘Hurry up & Wait’ with its nods to other influences such as Rock & Roll/Blues due in part to its walking basslines and catchy riffs I was pleased to find that this wasn’t just as straight forward as I assumed.  I have heard that they have been compared to the Gaslight Anthem which I would say would be a fair assumption, sort of like what an album between ‘The 59 Sound’ and ‘American Slang’ would sound like but with a more clean vocal which kind of reminds me of Josh Caterer of the Smoking Popes. The next track ‘Glory Days’ is a good old classic sounding punk tune with plenty of energy and a message that rings true throughout the album that deals with change, life and troubling problems.  ‘Sea of Souls’ is the next track which to me is one of the stand out tracks, with catchy hooks and message of ‘Don’t hate what you don’t know’ a great little line that relates to a lot of peoples narrow minded views in this country when it comes to immigrants and working class which the rats have cleverly referenced as the ‘Sea of Souls’.  Another stand out track for me is ‘Mary Comes First’ which explains the story of a jobless mother with 3 kids from 3 different men and is supported by each 3.  The subject matter is another social commentary on modern life in our country where one person has to work their ass off whilst the other just sits on their ass.  Another track I like is ‘Only the Rich Men’ which delves into another issue of separation between classes, where if you have the cash you get to live your life.

I think due to its messages, catchy hooks, great production and musicianship this band and record stand up high between the contemporaries of this particular genre of Punk, which combines Hardcore, Pop, Rock and Roll and Folk influences.  It’s extremely well written being soulful, mellow, slightly melancholy and at the same pumping and energetic.  Having listened to it several times, it’s defiantly a grower and would be keen to catch a show if they are down South any time soon.  They are in Tour during April so check out Yorkshire Rats and show some love from a band who have been through the shit and are now giving it their all.