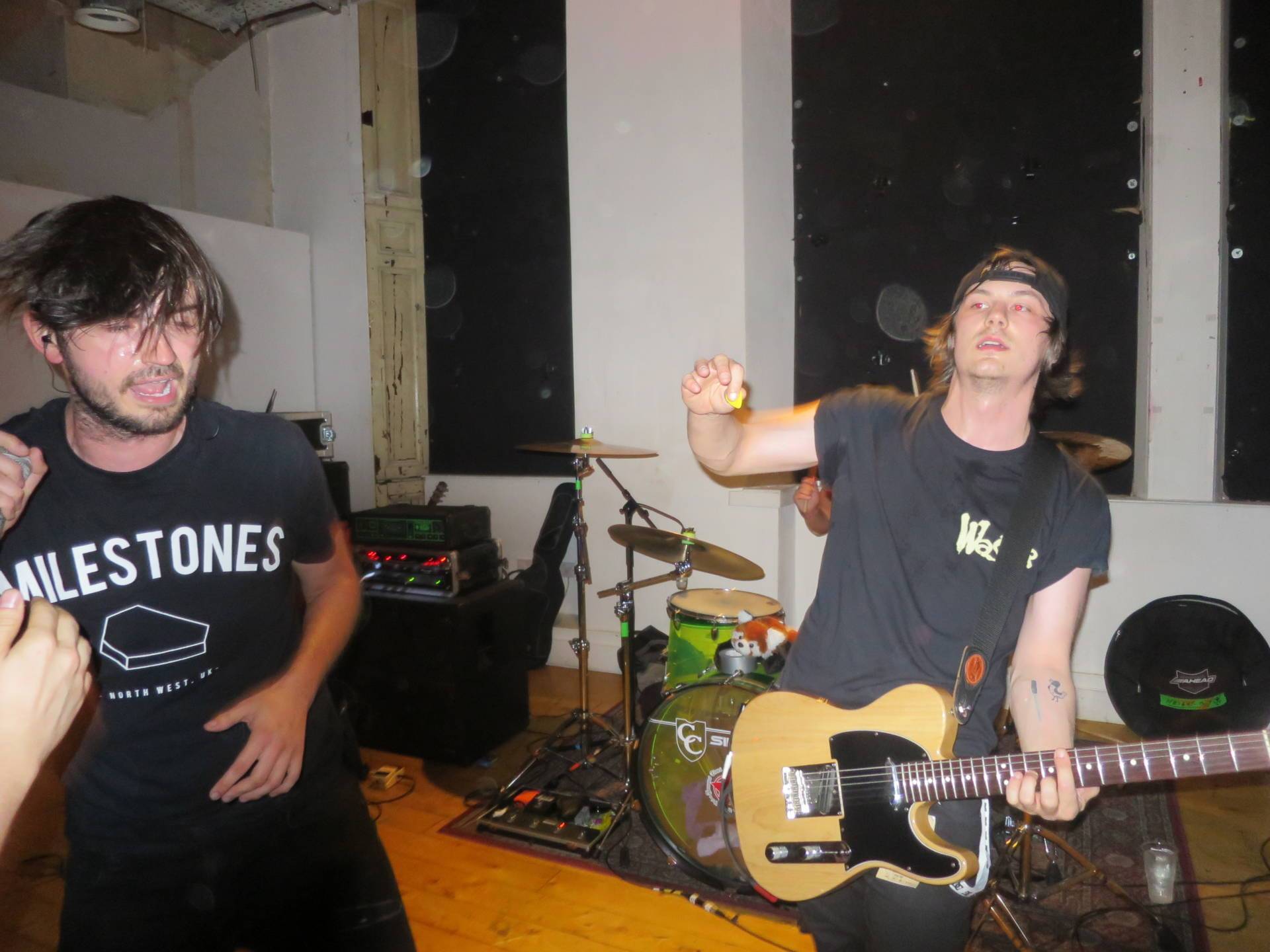 For today’s gig I headed to the Old Hairdressers in Glasgow for some much needed Pop-Punk. The stage was hard to find, it is upstairs; then up, then left…you get the idea! The venue either is going through renovations or has always been like that. The wall and the ceiling were stripped and the floor was obviously the original, creaking self I presume it has always been . This gave the evening a feeling like it was a secret and illegal gig.

First up was Martyn Ellis, with some acoustic punk pop. I missed the start of his set as I was interviewing Yeah Detroit. He has some really angsty pop punk lyrics. These lyrics may or may not be stories of his life.  You should go and check out his song ‘Jeremy Karl’s Change My Life‘.

A Reason For This were next to take the stage. Being the second acoustic pop punk act of the night consisting of Chris (on Vocals and Guitar) and Catbug (eye candy and stuffed toy). Chris is another Glaswegian singer with an American singing voice and he has clearly been influenced by blink-182. Every one of his songs are about girls; whether they be as friends, an ex or a homeless girl he met. He sings about the good and the bad in each of these songs and I enjoyed it! However, they are not one to listen to if you are trying to get over a breakup.

Up next were Century Thirteen a Scottish (Speedy!) Pop Punk band who had a heavy Blink-182, Green Day and sum 41 influence. For me they were two quick though, as I felt they put more into their energy and speed of their songs than on the symphonic feeling. The guitars took the vocals for the songs ‘Moving On‘ and ‘Break‘. For me I would like to have seen more of this. In ‘Break‘ they slowed it down and they had a more melodic sound. If you like speed pop punk, go and see these guys for sure!

Northern Nighlights took to the stage and brought the Pop Punk I know and love. They did this with a little rock/metal thrown in to make the corners of my mouth form into a smile. Loved their stage presence. Tonight they did not read the crowd well at all and with constant cries for a circle pit falling on deaf ears it was a sad sight to see. However,  they did eventually get the crowd involved at the end with everyone shouting the lyrics back which clawed it back. Next time I would like them to play for us and not jokingly offering £5 to everyone that forms a circle pit.  As a headline maybe the crowd would have been as invested in the pit as them and gone as mad as they did.

Earl Grey were the first touring band to take to the stage. I was expecting punk pop but, what I got was punk rock with nu metal vocals. These gave 500% on stage tonight. Leaving nothing left. Their singer was full on bat shit crazy, running up and down the stage, into the crowd, even hitting the microphone off his head before curling up into the fetal position at one point. Their songs had me nodding and I loved the sound they produced on stage and these guys from Germany know how to have fun on stage. If they come back to Glasgow. I will see them again. No doubt.

Last to take the stage were Yeah Detroit. They are an energetic pop punk outfit who have a slight hardcore vibe but are certainly Pop Punk through and through. The lead singer DJ’s voice reminds me of Out With The Old from America. Yet again here was another singer that couldn’t stand still; moving back and forth across the stage and getting the crowd really going! I have been starved of Pop Punk in Glasgow and these guys fed me till I was full and then gave me some more. There was a feeling of electricity in the crowd which hit its peak when they played ‘Woah!‘ as a mosh pit broke out and there was even a crowd surfer to boot. If you only check out one song of theirs, this is a song you should check out! In the last song the crowd invaded the stage and grabbed DJ and held him up above the crowd as he was singing…an amazing way to end a show.