On Friday night, The Xcerts, offered a few hundred people a brilliant chance to escape from the cold outside. Playing every song from their brilliant 2018 release Hold On To Your Heart, the trio proved they have mastered the art of joyous rock music. Even with the attendance hampered by the bad weather, it was […] 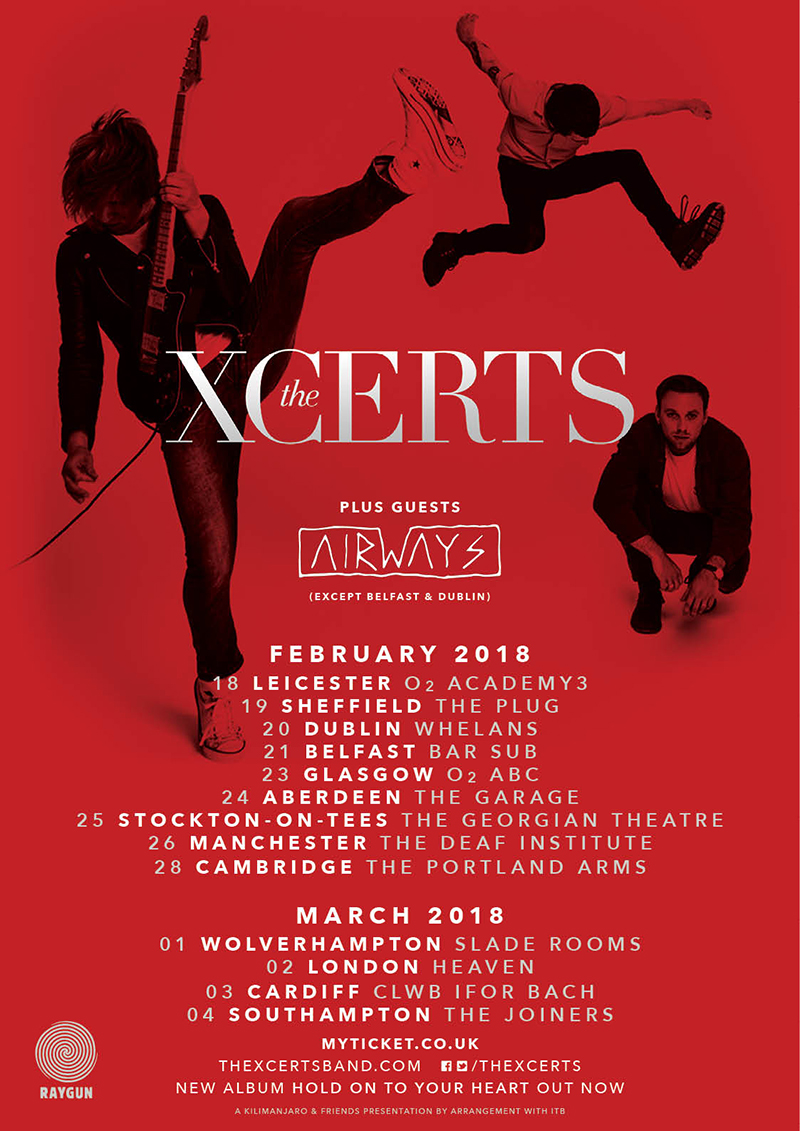 On Friday night, The Xcerts, offered a few hundred people a brilliant chance to escape from the cold outside. Playing every song from their brilliant 2018 release Hold On To Your Heart, the trio proved they have mastered the art of joyous rock music. Even with the attendance hampered by the bad weather, it was clear that The Xcerts should not be playing venues of this size for much longer.

Opening the show were Gold Key. A collection of talented and experienced musicians from the Watford area. Their brand of alt rock, with influences coming from Queens of The Stone Age to The Cure, captivated the sparse crowd. Playing mostly songs from their 2017 release Hello, Phantom, the four piece were a great opener for the audience arriving early to get out from the cold. Next up were Airways. The indie rock group have only one EP to their name, but were able to pick up from were Gold Key left off. The quartets toe tapping indie rock did well to keep the crowd warm and eager for The Xcerts.

After over ten years of being a band, it feels that with Hold On To Your Heart, The Xcerts are finally getting the attention they deserve. Tonight they played every song from their first top 40 release along with other fan favourites. Couple this with the arena style production of a venue like Heaven, and it is impossible not to imagine The Xcerts playing these songs in arenas.

Opening with the somewhat sombre The Dark, and following it with the joyous Daydream. This instantly grabbed the crowds attention. Although they played the entirety of their new album, they didn’t do it in full. A set list choice which worked perfectly. Spacing out the new songs with the hits from their previous albums, ensured that both new fans and old fans were always engaged. Closing the first part of their set with title track Hold On To Your Heart, they left the stage to crowd grinning from ear to ear, and demanding more.

The encore started with frontman Murray made his way back on stage with an acoustic guitar in hand, and introduced the anthem that is Aberdeen 1987. Singalongs are a constant theme for an Xcerts set but this encore was something from the top drawer. Following Abderdeen 1987 with a good old fashioned call back situation. The crowd obviously lapped this up. Closing with Feels Like Falling In Love a song which ended with the biggest singalong of the night, and ended what was a joyous escape from the cold weather outside.

On a cold, snowy Friday night a venue underneath Charing Cross station was made to feel like an arena by one of the best bands in the UK at the moment. The Xcerts commanded the crowd like you’d expect from an experienced band, and left you wondering how long they will be playing venues of this size.