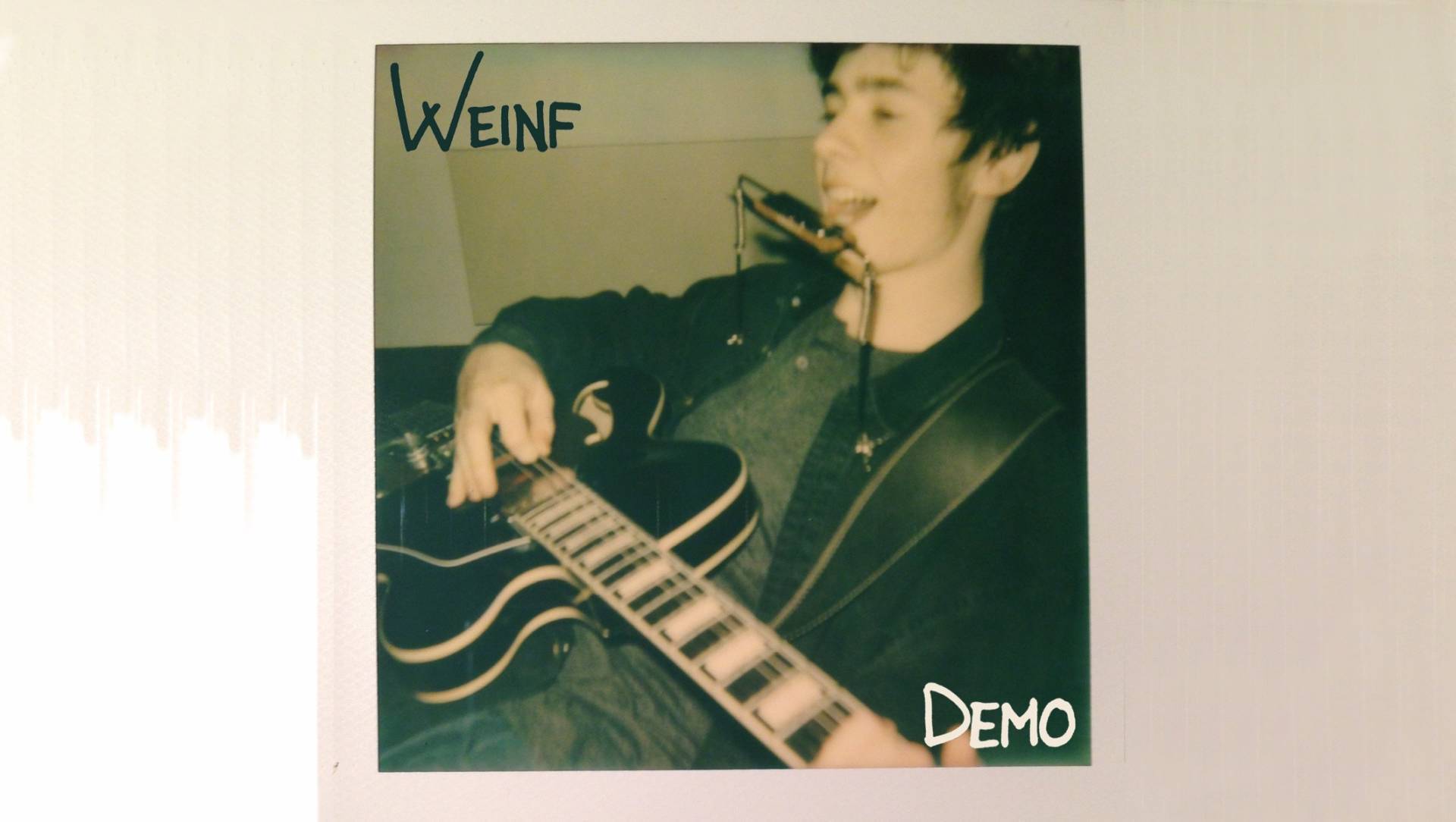 Weinf. Really, What does that mean? I hear you say… Exactly what we thought… If you like wondering if someone is serious, weird or a genius… Then read on baby – it’s going to be a hell of a ride! (Probably through Mexican fields).

We got an email from Weinf, asking us to check out his music, in the hope that we would ‘dig it. -[Hmm… Dig it…] His influences are stated as The Doors, Bob Dylan, Morphine, Jack White and Julian Casablancas, among others – [A bloody intriguing start] and in his facebook bio he describes himself thus “whore lover and music maker” – [I really am starting to like this guy]

He was kind enough to add links to his music on bandcamp… So we turned the speakers up, grabbed a can of Ting and sat back. What we heard next was, well, how can it be described? WHAT. That’s it… that’s the best way to describe our first listen to the demo. ‘WHAT?’ All of the team at AltCorner couldn’t decide if we loved it or hated it, if it was worth reviewing or what to do… So we decided that we would leave the review – maybe forever because we didn’t want to give him a worthless review. But then, over the next couple of days…

WE CANNOT STOP SINGING THE SONGS! This guy has created some really catchy tunes and lyrics – more catching than a Winter Cold! So, we decided that maybe the guy has something and we have to take another listen… So here goes… The REVIEW is ON!

First off, the production is all home grown and in places sounds like it might be recorded using a potato – but we can forgive that – it is a demo after all… Most tracks have a White Stripes ‘Hotel Yorba’ feel – with blocky, chunky, fat sounds reminiscent of the 50’s -60’s guitar style, which, in places is littered with rather accomplished riffs and great tunes. His vocals are definitely influenced by the likes of Bob Dylan and The Doors.

The demo blasts off with ‘You And I Are Dead’ – This track has some neat riffs, a cool melody, and made in the mould of classic rock and roll – even sliding some organ style keyboards in there… The track is a little ‘dirty’ when it comes to crisp sounds and the percussion is a little painful in places – but it does make up for all of this with a damn catchy tune. – [Even though I have no idea what he is singing about..!]

‘Whiskey’ is a short track of just 1 min 44 seconds, but is fun, with a solid skipping tune – maybe a bit short to be a full blown track, but shows potential.

‘The Basement’ is the third offering from Weinf… Again, you can hear the influence of Bob Dylan, The Doors etc. However, Weinf is not quite there… Actually, he’s a mile away but there is something in this demo that we quite like… an unusual style of his own.

‘Riding My Bicycle Through The Mexican Fields’ is by far the most contagious tune from Weinf, littered with a lot of intelligible lyrics (perhaps we are crap at understanding), leaving us ‘mum singing’ the one or two lines that we picked up upon first listen. Some fabulously cheesy keyboards and funky 60’s style guitar combine into something that should have been hunted down an killed – but it just bloody works – it’s cheesy, it’s fun, it’s catchy… Stuff it – I think I have fallen for the Weinf… Whore lover and music maker – extraordinaire!

Right, back to reality, and putting a stop to all of the silly stuff… If Weinf neatened up the production, maybe distilled the sound a little and with some more experience and maybe a slightly clearer vocal track – he could be a new and unique sound, following in the footsteps of artists like Jake Bugg.

We have totally enjoyed his music and hope that he gets a few more tracks out and finds someone to help him a little with the production… Maybe even form a band with some people with the same influence. Whatever he does next – we cannot wait to hear it… Fun and Funky is always welcomed by the AltCorner Team!

We think Weinf could be great and we really hope he goes far! If he ever tours in the UK, we will be there in the front row cheering him on and maybe AltCorner and Weinf can go on a bike ride through Mexican Fields one day… if only -[unless bike is a euphemism…]