For those of you who have never been to the Thekla in Bristol, the first thing you notice about it (and the most obvious) is that it is a boat. The second thing is that inside it is a maze with on occasion dark corridors, one of which leads to a bar where tonight’s show is taking place. 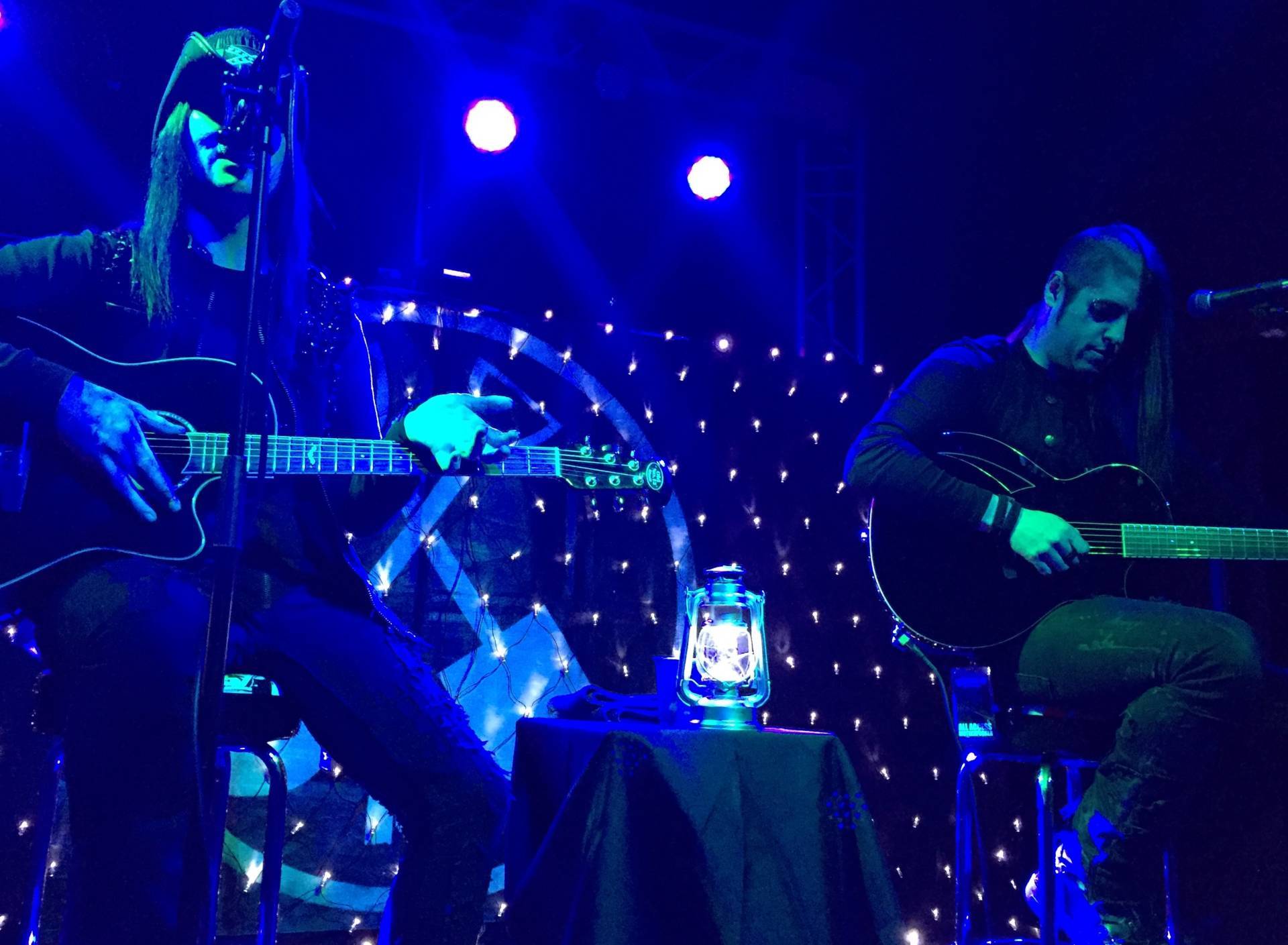 For those of you who have never been to the Thekla in Bristol, the first thing you notice about it (and the most obvious) is that it is a boat. The second thing is that inside it is a maze with on occasion dark corridors, one of which leads to a bar where tonight’s show is taking place.

Tonight goth rock came to a boat in Bristol, well sort of. Gone are the fast paced, punky, snotty songs Wednesday 13 has become famed for, instead there is a laid back, calm acoustic show, that makes the macabre lyrics sound even more disturbing. Gone are also the ghouls that usually accompany him. Instead tonight, it is just 13 and guitarist Roman Surman.

Upon entering the stage, 13 addresses the crowd as to why his other guitarist Jack Tankersley is not with them. The crowd seem to be genuinely disappointed, suggesting that Tankersley is a fa. Favourite, but on the mention of the upcoming Halloween shows they soon pick back up.

Being an acoustic show you could be forgiven for assuming the crowd to be slightly slow and un enthusiastic. However this is not the case, from the very first note of Blood fades to black, the crowd are hooked. The room becomes one big sing along throughout the set as 13 and Surman take us down some of the murderdolls back catalogue with classics such as Love at first fright and Nowehere, not to mention a few songs from Frankenstein Drag Queens (scary song and welcome to the strange) and many we’ll know Wednesday 13 songs, such as God is a lie, Dixie Dead and new songs such as I love watching you die.

Every few songs 13 asks the crowd if they have an questions before he delves into a story. The story typically has something to do with the next song, but on occasion the story has absolutely nothing to do with the song. 13 touches on stuff that has happened in his personal life (marriage and drink driving during Skeletons) to his touring life (altercation with a fan in Europe) to the Murderdolls days (Murderdolls drummer Ghoul getting into fight with Cradle of filth’s Dani Filth at the metal hammer awards in 2003 to Joey Jordison (ex-Slipknot drummer and Murderdolls guitarist) making them perform nowhere a second time because the crowd “deserved better”)The crowd, alongside 13 and Surman feed off the interaction the Q&A allows, the crowd even gives a round of applause when 13 gives a shout out to the late Gunner Hansen (leatherface in the original Texas Chainsaw Massacre). The night finishes off with another crowd pleaser bad things

The only real downfall of tonight is that 13 and Surman are not able to finish the set list due to over running and it would have been nice to hear more from Surman. However, throughout the night 13’s vocals are on point and despite him addressing his nervousness, he seems pretty comfortable and enjoys every moment he is up there. You can truly appreciate the talent 13 and Surman have during the acoustic show and how they compliment and feed off each other. Whether it’s their normal shows or acoustic, 13 and co fail to disappoint.