I had the wonderful opportunity to experience Warped Tour for the first time ever. Being new to this event, I had no idea what to expect other than the inevitable of receiving the most horrible sun tan.
As the gates opened lovers of music flooded the grounds and made their way to the stages, tents, and vendors… 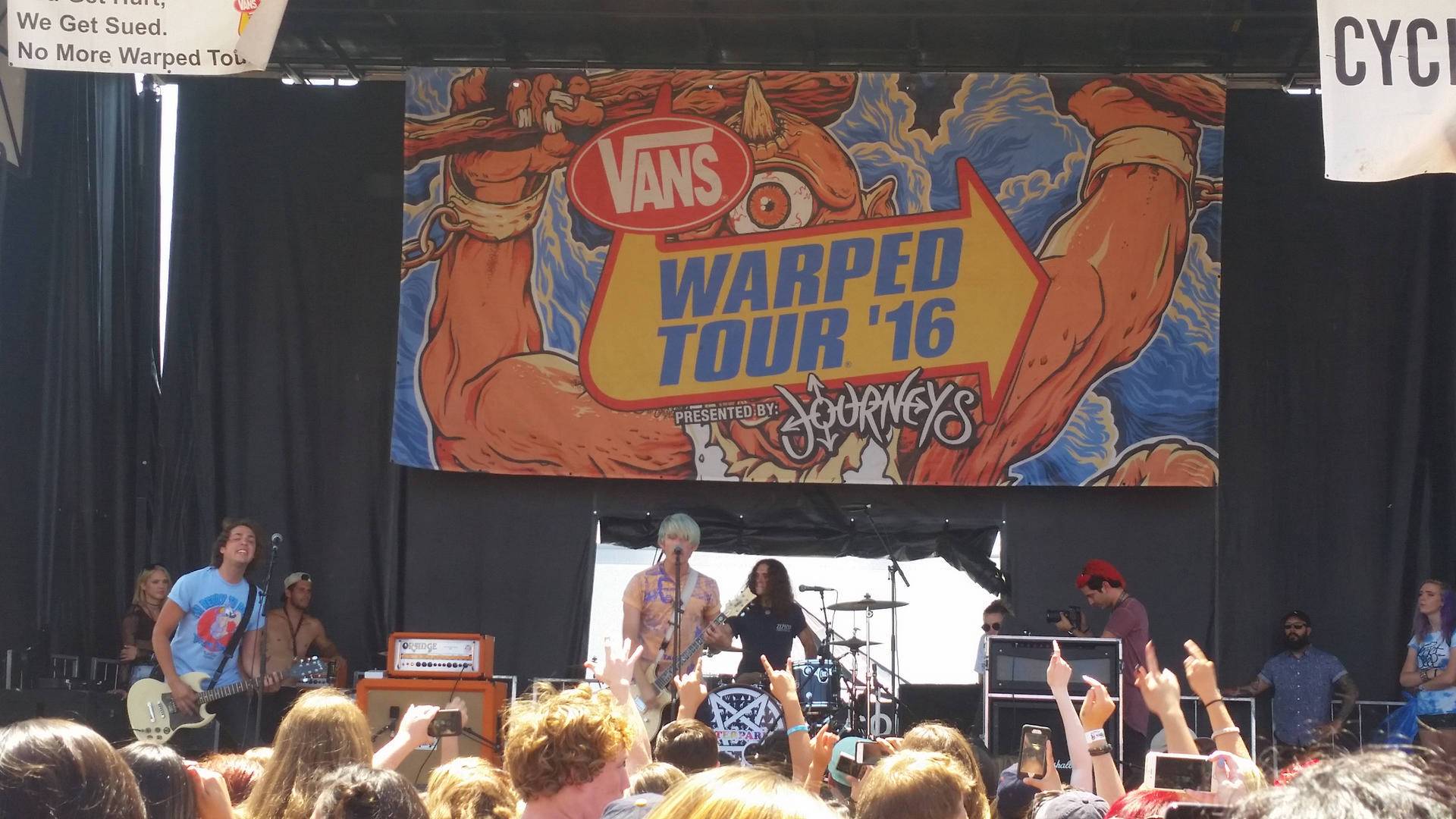 I had the wonderful opportunity to experience Warped Tour for the first time ever. Being new to this event, I had no idea what to expect other than the inevitable of receiving the most horrible sun tan.
As the gates opened lovers of music flooded the grounds and made their way to the stages, tents, and vendors. There was so much going on all at once, with no idea where to start I was overwhelmed and felt my anxiety would take over to ruin my time. Taking a deep breath trying to relax, I made my way to the schedule and made sure to pinpoint when and where my favorite bands would be playing.

As I waited for the first band on my list, Waterparks to start their set I was given a moment to take in my surroundings. Tents for each band were set up in rows, selling merchandise such as t shirts, giving away stickers, letting fans know when meet and greets would be held. Vendor booths were lined up along these rows as well. Some offering information on mental health awareness, others promoting candy such as Twix, and various clothing companies.

Waterparks a three piece band with a pop punk sound began to play, and their energy on stage was great. Their lead singer, Awsten Knight made jokes with the crowd. “If I were in the sun, I’d be totally envious of everyone in the first 3 rows who are in the shade,” he says with a laugh.
Running from stage to stage for bands that played back to back (or to my horror, at the same time) was a workout that I didn’t mind having. It was part of the Warped Tour experience that I accepted, along with seeing more skin than I was used to.

State Champs, Mayday Parade, and Issues were among the bands that were on my list to see while at Warped Tour. Each band drawing in a huge crowd filled with die hard and new fans. Lead singers belting out each lyric with all their heart as the fans sang back in unison. Although the summer heat was getting the better of everyone, each band played with tremendous energy.

Unfortunately, I didn’t have a chance to see every band that I wanted, but I was lucky enough to catch Assuming We Survive, a local Southern California favorite that was grateful to be back home for the moment. With their catchy guitar riffs and lyrics, they sung songs from their 2014 EP, up to their first recently released full length album “All Roads Lead Home.” With local fans & family in the crowd, the five piece had tremendous energy, when they asked the crowd to create a mosh pit the crowds enthusiasm was immeasurable. Dirt was flown everywhere, people were shoved but the band enjoyed it truly feeling the love.

I watched families make their way through the crowds. Teenagers explaining to their parents what bands they simply cannot miss, babies with ear muffs on bobbing their head to the heavy guitar riffs blasting from the speakers. Traditions and music taste being passed down to generations right before my eyes.
Making my way to the Journey’s Right Foot Stage before Sleeping With Sirens set was to begin, there was already a huge crowd. Being small I tried my best to get as close as possible with no luck. Stuck in the middle, I made the best of it as they opened their set with “We Like It Out.”
“This is my favorite show from Warped tour at all. I’m not talking this summer, I’m talking about Warped Tour in general. We’ve done it 6 fu**in years, you guys killed it,” lead singer Kellin says to the crowd before finishing their set with “If You Can’t Hang”.

Warped Tour is something that everyone should experience at least once if that music suits you. With so many stages, and so many people from all over it was just more proof that music is indeed universal. Whether the music these wonderful bands create have helped one through hard times, are the soundtracks to our days, or simply a way to hold onto memories we don’t or can’t forget; we were all there for one reason, to experience it live and feel alive.

I don’t know how I allowed myself to miss Warped Tour every year until now, but it is an experience I simply must do again.