The small crowd throughout a lot of the day may have been down to the Sunday evening timing or the genre of music not being something often seen at the venue, however the line up was one of the best the festival has seen and was a solid collection of some of the newest and most exciting rock bands out there right now. For fans old and new it was a real treat to see these bands in such a small venue & for a very reasonable price. 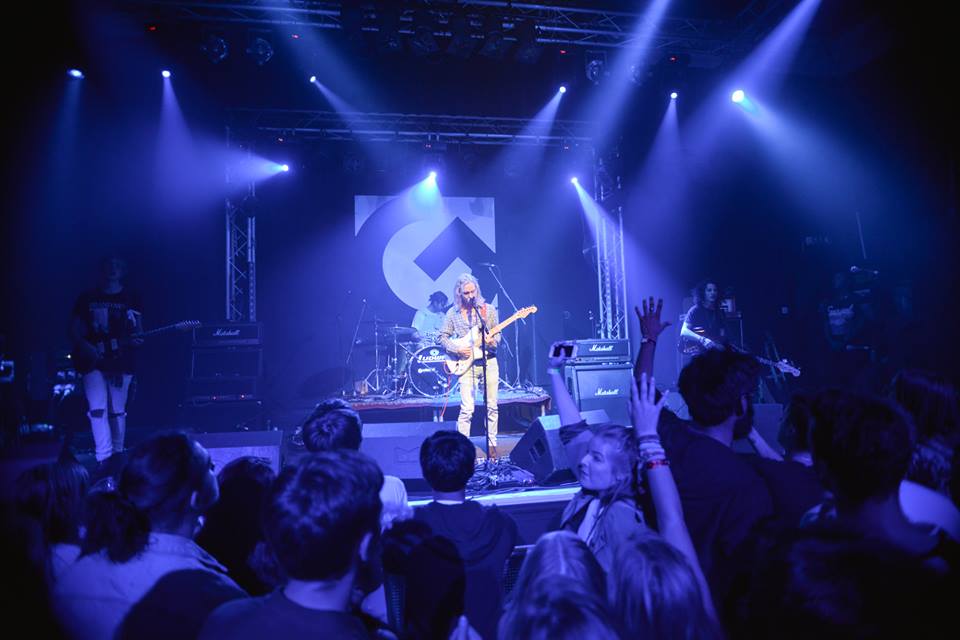 Set in the small venue of Gloucester Guildhall, Underground Festival sets out to give a stage to the best of the new and most exciting talents of the rock and alternative world. Saturday was a mixture of elector and indie vibes, whilst Sunday turned up the volume to all things heavier and louder.

As you enter the venue, it’s small size means the music is present instantly. In the earlier parts of the day The Rumble brought some old school rock & roll vibes to the festivals second stage whilst Big Spring and All Ears Avow showcased their exciting talents on the main stage. Both showed real promise and some good quality solid rock songs. Both are bands to keep an eye, or ear, on over the next few years!

When Dead! took to the stage there was a clear change in excitement and atmosphere. The band have received much praise for their recorded and live work across the past year and the first full front row of the day along the main stage just proved that their fan base is growing. Throughout their loud and fast paced set they very clearly had the audience members in the palm of their hands with the first real, and somewhat often questionable, headbanging of the day getting going. It’s easy to see why the band are seen as one of the real hopes for the future with their passion and clear love of music showing throughout.

The Saint Pierre Snake Invasion are undeniably showmen and it was a shame to see a somewhat small and unresponsive crowd for their mid afternoon set. As ever the band were loud, in your face and full of humor, even if most of the audience weren’t up for it. They are a band who’s sets may need that bigger crowd who are fans of theirs to truly work however their set was enjoyable as always and they cannot be faulted for their rock musicality. Puppy followed TSPSI a mere 20 minutes later and this was a clear showing of just however diverse the music was on the day, if a little too diverse. From the loud heavy rock of the previous set, the audience were brought down to a more grungy and late 90s vibe. Possibly too big of a difference in genre.

If a bit of pop punk vibes were what you were after then Roam‘s main stage set was the place to be. As with Dead! the audience was up for a good time and bounced their way through the half hour set. A diverse crowd sang back every word of their songs and there was a sense of dedication and a real loyal fan base that had turned out for them. It’s hard to deny that the band are a lot of fun and they seem to enjoy what they are doing on stage just as much as the crowd do. They have all those classic pop punk riffs and jump thrown in now & again for good measure. A ray of upbeat and lighter rock.

Fort Hope and Boston Manor are both bands that have been on the live and festival circuit for a few years and always drawn in a crowd. The earlier brought a lot of their newer music to their set which had those slighter darker elements we have been use to with all the previous work. Though with the audience calling for them to play one of their most popular tracks, Rapture, they chose to close their set with Plans, equally as good of a choice, and repeatedly mentioned that fans would be able to catch them playing it on their upcoming UK tour. They were as loud and passionate as ever. Boston Manor possibly couldn’t have played to a bigger crowd on the festivals second stage, packing out the small room. The band looked like they were having the time of their life from the get go and the busy audience seemed incredibly happy to have the band playing in the town. A mixture of old and new the set was enjoyable from start to finish and the band are sure to only go from strength to strength across the next year.

There seemed to be a number of Landscapes fans in the audience, when they finally appeared. The band did look a little worried at the small audience numbers before they began their set but they did build as the set went on. Having not seen or heard of the band before it was a real treat to see & hear something new. Musically, they were much darker and heavier than what had come before in Boston Manor and Fort Hope and were somewhat of a transition between them and the final headline act of Feed The Rhino on the main stage. Due to the stage splits, which meant never missing a band if you were at the festival from start to finish, this was broken up by Milk Teeth so the transition was a little lost. Putting on a set that from start to finish was packed full of loud guitar riffs and lyrics that clearly had a connection for many of the audience members, the band pleased fans for sure.

Easily one of the biggest crowds of the day went to Milk Teeth. Having been praised as one of the most exciting bands in the UK rock scene today it only seemed right that they headlined the second stage on the final day of the festival. With fan favorites as well as a request to perform an older song from Twitter the band proved why so many love them and their music. They are full of sass, have a cool edge and that something a bit different. The music may not be those big singalong anthems that other rocks bands have but that doesn’t seem to be of any concern to their clearly dedicated fans who are very passionate about what they are doing and bringing to the rock genre. Without a doubt the band will continue to be a heavy presence within the rock scene for a while to come.

Feed The Rhino are a band that deserved more than the disappointingly small crowd that met them. Drawing in all the audience members that were left to be as close as possibly to them, the band still performed at full pelt and put on a set that was a riotous as ever – minus a visit into the crowd. Climbing a top one of towers of speakers, all to the slightly worried looks of security, Lee and the rest of the band performed their mix of metal and rock with as much passion as ever. They are a band that have really worked at what they do and know how to do it well. For fans this would have been a real treat to see them in such a small venue and if the room was jam packed would have been something special. They worked with what they had and did so well.

The small crowd throughout a lot of the day may have been down to the Sunday evening timing or the genre of music not being something often seen at the venue, however the line up was one of the best the festival has seen and was a solid collection of some of the newest and most exciting rock bands out there right now. For fans old and new it was a real treat to see these bands in such a small venue & for a very reasonable price.