Turbowolf put on one of the most eclectic high energy shows of 2018 so far at a near capacity Scala. Playing an almost even spread of songs from their 3 albums, the energy levels never dipped across the 12 song set. Supports for this show came from Big Spring and Puppy. Big Spring, a grunge […] 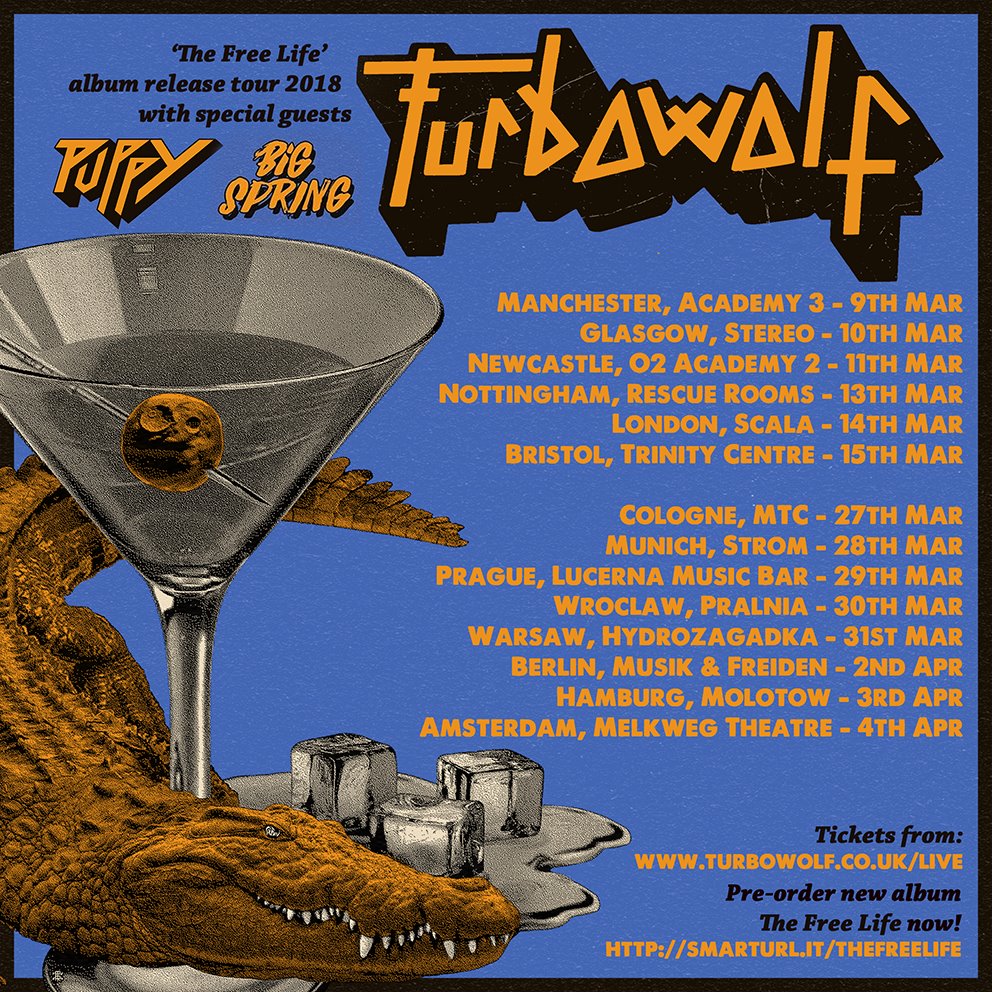 Turbowolf put on one of the most eclectic high energy shows of 2018 so far at a near capacity Scala. Playing an almost even spread of songs from their 3 albums, the energy levels never dipped across the 12 song set.

Supports for this show came from Big Spring and Puppy. Big Spring, a grunge band of Pearl Jam/Soundgarden ilk, had the tough task of playing only ten minutes after doors. While the crowd filled the room, the fuzzy riffs and lo-fi vocals indicated the potential this band has to progress further in an already thriving alt-rock scene.

Ever since their debut EP Puppy have been tipped for big things by the UK rock media. Anyone who has had the pleasure of seeing this band over the last two years will note that they get better each time. By this point they are nearing the end of the touring cycle for their second EP and have a live presence that precedes their small back catalogue. Tonight they showed all the signs that when their debut album drops they will have the world in their hands. From little quips in between songs to seemingly improvised fills in the middle of songs, Puppy played like a seasoned band and wowed the almost full Scala. They even played 2 unreleased songs which fit perfectly into their set list and offered a glimpse into what future releases will sound like.

If asked to describe Turbowolfs sound, you’d probably have a lot of genres thrown your way. Everything from psychedelic to punk can be attributed to this unique band. Their live show is no different. Touring their most recent album The Free Life, it was songs from this that took precedent in the set list. Each new song fitting in perfectly with the Turbowolf sound. Domino being the standout live track from the album. Its big riffs and infectious hooks made it one of the highlights of the night.

Turbowolf sandwiched their set tonight between two songs off their aforementioned new album. This meant that some of their biggest singles ended up appearing in the middle of the set. This worked in Turbowolfs favour as at no point did the response from the crowd drop. Particular highlights from the set list were Nine Lives and Rose For The Crows. Both of these songs elicited huge reactions from the crowd.

The energy Turbowolf exude makes their live shows impossible not to enjoy. This is in no short part, due to their frontman Chris Georgiadis’ demeanour on stage. It could be the bonkers stage patter in between songs or the slow tension building introductions he imparts on some of the songs, this is in no part due to the aura he carries on stage. Chris Georgiadis’ is the centre of attention for this crowd and every bit of energy he gives is more than reciprocated by the crowd.

When your set list is almost made up entirely of singles, it is very hard to fail. Couple that with the off the wall energy of Turbowolf and you have one of the most fun live shows in the UK. Tonight was no exception, and a near full Scala was bouncing wall to wall with joy.