As Code Orange headed off stage to a stunned crowd, I wondered how I would start this review. What came to mind was; three of the most exciting bands in metal, and Trivium, wow Brixton. I decided against that as it sounds critical towards Trivium. A stance I definitely didn’t want to take once Trivium […] 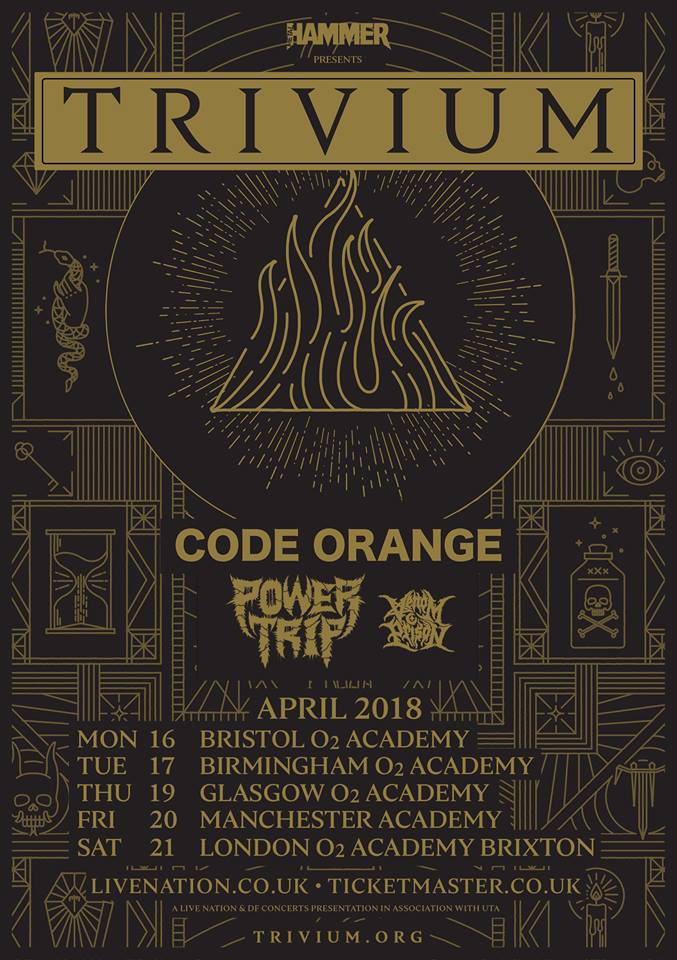 As Code Orange headed off stage to a stunned crowd, I wondered how I would start this review. What came to mind was; three of the most exciting bands in metal, and Trivium, wow Brixton. I decided against that as it sounds critical towards Trivium. A stance I definitely didn’t want to take once Trivium had left the famous Brixton stage. I wouldn’t have been the only one doubting whether Trivium could follow the exceptional support acts of tonight. However they went one better and made the night theirs.

Opening tonight were death metal quintet Venom Prison. Taking to the Brixton stage shortly after six would be tough for most bands, but for a band as brutally heavy as Venom Prison it seemed a mammoth task. A task they rose to. Not swallowed by the size of the stage, the five piece lead by the commanding Larissa Stupar roared through songs from their debut album Animus. The monstrous riffs and bone shaking vocals gripped the slowly filling Brixton. It was an outstanding statement from a band who proved that heavier bands can more than hold their own on bigger stages.

Following Venom Prison were thrash metaller’s Power Trip. As soon as the opening riff to Soul Sacrifice, every metal head in the room knew they were in for something special. Racing through some of the best thrash songs of the 21st century. The crowd were rapturous in their response. The crowd were losing their minds. Even with two stoppages during the set due to injuries, Power Trip’s momentum never wavered. This was an astonishing set from the Dallas thrashers. Who have proved themselves to be one of the best thrash bands of the 21st century.

What followed was perhaps one of the most anticipated sets in Brixton’s recent history. Pittsburgh hardcore band Code Orange have been taking the world by storm since the release of the seminal Forever. It was tonight at Brixton Academy that they proved themselves to be the best band on Earth. The set was polarising. From the battle cry of “THIS IS REAL NOW MOTHERFUCKER” to the haunting singalongs on Bleeding In The Blur. The Brixton crowd was left stunned. As Code Orange wound their way through the most bruising and violent of modern hardcore anthems as well as mesmeric industrial tinged ballads. This set was a statement. This is Code Orange’s world now.

Even the best bands would struggle to follow Code Orange at the moment. So you definitely wouldn’t have been alone if you questioned Trivium’s ability to hold their own. That is why, what came next must be considered one of the best Trivium shows on UK soil. They did more than hold their own they made the night theirs. They stormed through a set made up mostly of songs from The Sin And The Sentence. In between the monstrous new material Trivium dropped a few deep cuts as well as their biggest singles. This didn’t feel like a band over 15 years into their career. This felt like a newer band on their way up. This was Trivium at their best

As Trivium closed their set with the infallible In Waves, the crowd were left knowing that they had seen one of the great nights of metal at Brixton Academy. With Venom Prison proving that even extreme metal can hold its own on the big stage. Power Trip showing that thrash metal is still as loved as ever. And the best band in the world Code Orange. It was a historic bill headlined by a Trivium on a resurgence. Who proved they will not be left in the dust by the newest crop of world conquering metal bands.