James Simmonds saw Tim Barry, Cory Branan and Sam Russo at The Exchange Bristol and here is what he thought… 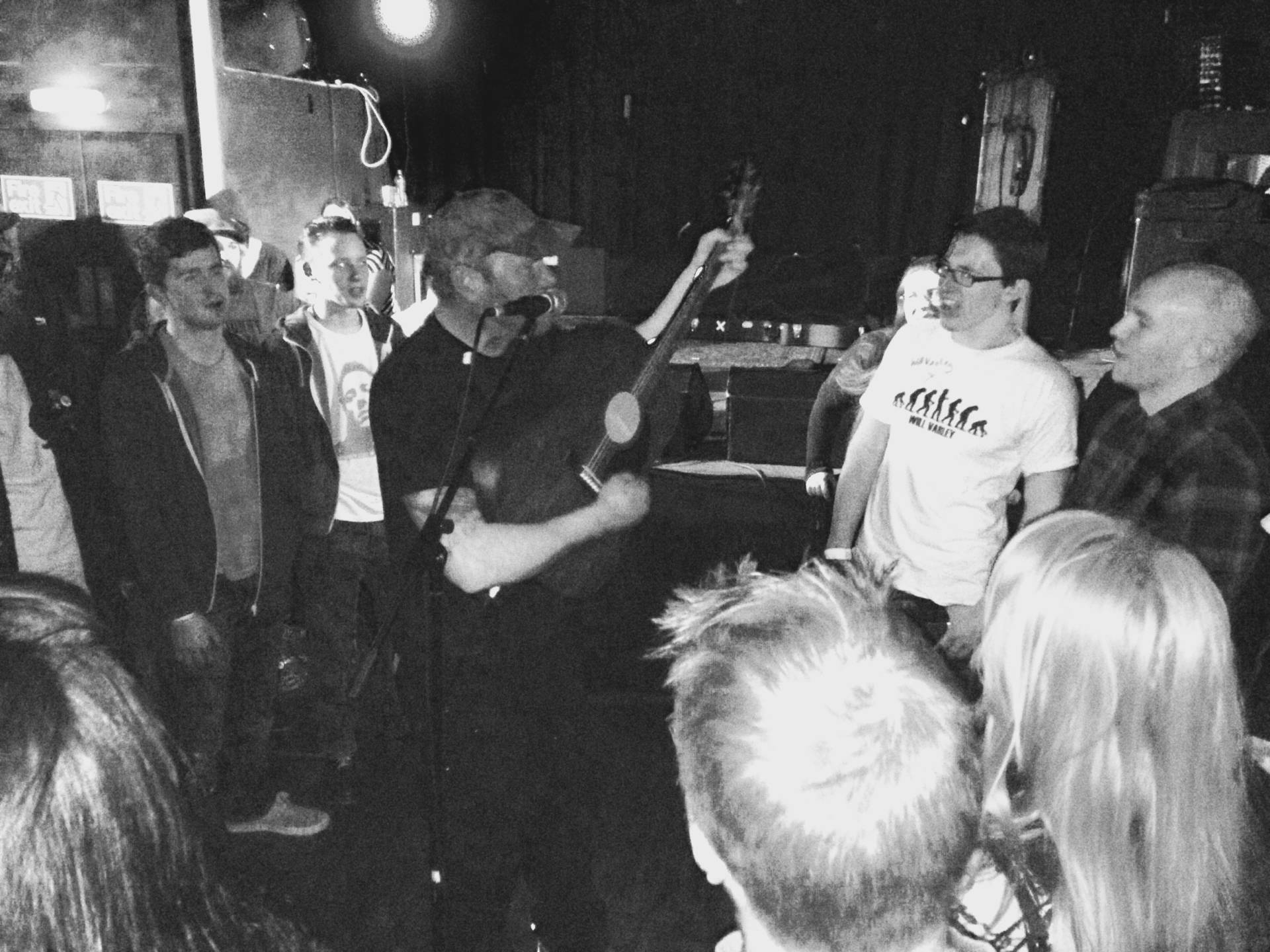 Singer/Songwriter night at the Bristol Exchange and a gloomy English evening was refreshed by some exquisite acoustic Americana/Country/Folk punk in the shape of Tim Barry, Cory Branan and our very own Suffolk troubadour Sam Russo. This was one leg of their tour leading them around the UK and this was a great chance to see them in an intimate setting in our very own cider city.

First up on the bill was Sam Russo, as mentioned hails from Suffolk, sporting a massive beard which has been on the grow since I first saw him play The Croft years ago supporting Dan Andriano (whoop whoop what a massive name drop) where I was trying to convince him to leave a phone message for a mate on his stag do but that’s another story.  Sam currently has a record out named ‘Storm’ and if you’re familiar with him, then you know the style is the more tender side of the Folk/Punk genre mixing moods and social themes with a dash of observation and humour. As all us players and punters know, it’s never easy being on first, knowing full well the crowd are there for the main course but Sam gave a great low key performance with some gravely banter in between songs.  After he can remember the song names he puts in some nice finger-picking work on the guitar and has a very distinct voice that ranges from a soft tone, to an all out burst of emotion that sometimes cracks at the peak.  Not that this is a bad thing because I for one am not interested in perfection just someone who has committed themselves to their art something of which I think Russo is great for.  After pointing at the disco ball in the middle of the room he mumbled, ‘This song is about this thing’ which I guessed would be the song ‘Dry Shampoo’, a song that examines the current UK binge culture.  It was a quick half-hour set which was well received although the crowd had not made themselves comfortable and suitably social lubricated, which was evident from the off and I think Russo handled it in the right fashion.

Next up was the illustrious Cory Branan who currently resides in Nashville and made a name for himself within the Memphis music scene.  Currently regarded as a prolific storytelling songwriter and as you can imagine Branan’s style is more countryfied, bluesy and his voice has a slightly gravely, whiskey soaked tinge to it.  If you sort of imagine a more clean version of Ben Nichols of Lucero then you’d have Branan. On his records, of which he has released four, he has a backing band so seeing him stripped down would be an interesting.  He has recently released lp record ‘The No Hit Wonder’ on Bloodshot Records to critical acclaim and his opening song was the very title track.  As with all his songs Branan has a real knack for storytelling and creating little scenarios whilst being very up beat, he also has a mean gaze as he plays, almost trance like.  As he stares you out he carries out some intricate finger picking work on the guitar.  At one point he explained how difficult it was to be a musician in Memphis, as it being the spiritual home of country music, he would play shows with people staring with expressions as to say ‘What you gonna do?’, so he upped his game and is now a pretty great guitarist.  Saying this though his guitar was slipping out of tune a fair bit but I guess this is because of the temperature, his being used to a different environment, credit to Branan though some people could choke from that sort of shit but he just kept going.  He whipped through the set with some favourites of mine ‘A Girl named Go’ and ‘The Prettiest Waitress in Memphis’.  The music was great and the banter in between was a highlight, talking about the fact that the main distillery for whiskey in the US is in a dry county which makes no sense.  He also mentioned the guys he’s worked with on records and wasn’t shy to mentioned it but  I guess all in all ‘It ain’t bragging if it’s true, said Muhammed Ali and Me’!  Branan created a bit more life in the crowd and left them more pumped for what was to come next.

The final act would be for the man most were there to see, former frontman of Richmond, Virginia punk band Avail. Tim Barry has been rocking it solo for over ten years and is regarded as one of the great Folk/Punk disciples.  He has created a good following, has released five LP’s and has been recruited for the respected Revival tour before.  He could see that the crowd was eager to be pleased so even before getting stuck into his set, he got an audience member to plonk the mike into the centre of the room, so he could perform within the audience.  This was an awesome move because from the word go the crowd was not only a spectating but participating as well.  He has quite a presence about him, similar to Chuck Ragan, he gives off a sort of mans mans demeanour and wouldn’t be out of place roaming the USA woodlands and riversides in his spare time.  He even gave us an anecdote  about how he used to hop freight trains in his youth where he would meet all manor of company who would ultimately provide him with inspiration for his work.  One of the tracks that stood out was ‘Dog Bumped’ about a man serving a prison sentence for taking wrap for the murder of a sex offending father.  A lot of his material touches on some pretty extreme subjects and the rawness of this is rivaled in his performance.  Saying that, underneath the hardened exterior is someone who is someone just like you and I who has fears and ideas for better living.  He explained how thankful he was to the audience, in a genuine manner and told us that he still gets scared as shit before he performs and once that feeling stops, that shall be the time he stops performing.  Lets hope this doesn’t come about because he is a compelling performer who loves to thrash his guitar and the subject of one of his songs is to break down his compositions, to how basic it is but exclaims that this is what he loves to do.  This was the underlying theme to the night, you need to focus on something you love and keep with it because life is too short to wasting it doing something you aren’t enjoying.  His audience participation didn’t end there, he took another trip into the crowd and was courteous enough to basically let the crowd decide on the set list.  I loved the rendition of the song ‘Thing of the Past’ which is a great sing along song expressing our love of getting trashed, which the crowd lapped up.  The set would then end on a dizzying high and the crowd was left cleansed and exhilarated with plenty to think about.  For me I think this was a perfect way to spend a Tuesday evening it had a perfect range of artists.  If you get the chance to catch these guys tour I highly recommend you do if you like you songwriting raw but with deeper meaning.