Gareth Rooke went and saw Magic Trik, Griever and headliners, The Dead XIII in Glasgow. The New Grave rockers were in the midst of their tour as they tour their latest release ‘Catacombs’. Read what Gareth thought here… 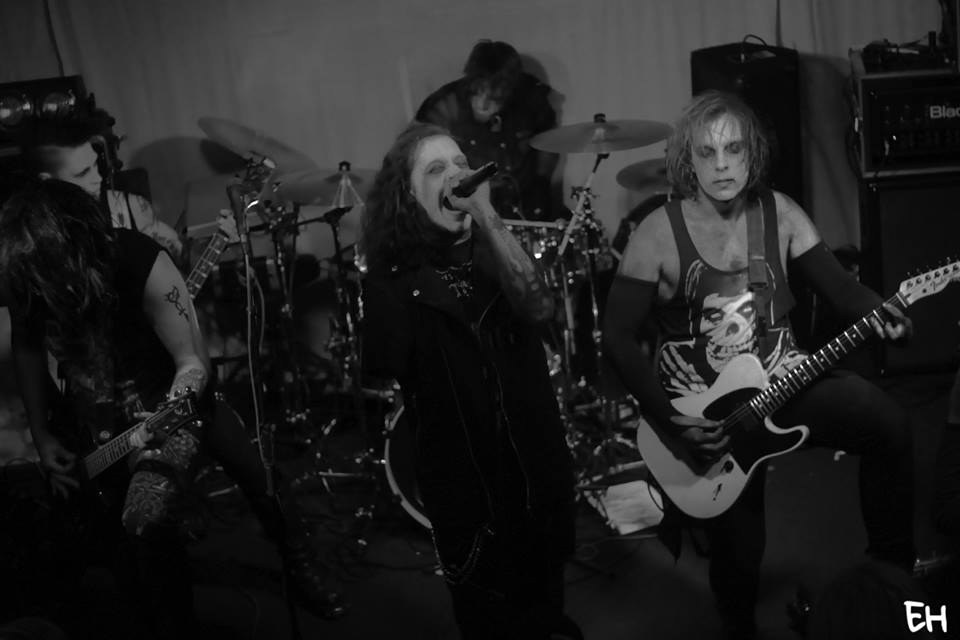 Today’s gig saw me take a rare trip south of the river Clyde to Shadow Sounds in Glasgow. Starting the night were Magic Trik. They provide a good old school rock sound which is unusual for a band so young.  Their influences are clear to see with a good Lad Zepplin cover being delivered tonight. The standout in this band is the awesome guitarist Alek, who is one of the best I have seen live. Their singer has seemed to have borrowed a lot of his look and mannerisms straight from the classic Motley Crue whilst on stage wouldn’t look out of place fronting Steal Panther (except for the age difference). This is a band I really like to hear live and can’t wait to see them evolve their sound.
(7/10)

Coming on next were a New Grave outfit called Strange Creatures. This band did not impress me one bit. I admire their courage in trying out a new sound and for the promoter for putting them on the bill but this bands is not one for me. They are a  new wave/new grave fusion and it does not work. The lack of drums makes their sound bland and uninteresting. The two piece play with a synth and a guitar but the lack of bass meant there was nothing to jump to, nothing to dance to, nothing to loose yourself in. The vocalist didn’t have the most interesting voice and there was nothing, meaning wise in the lyrics. They droppd the guitar after a few songs and it was a backing track and synth for the rest of the set…baffling! Once they went into a 7 minute song it was like listening to bad karaoke of their own song. It is very rare that I walk way when a band is playing no matter how good or bad they are but, Strange Creatures accomplished that tonight.
(1/10)

Griever came on and it was a breath of fresh air. The shocked looked on the faces of the crowd from the first riff to the last showed that no one was expecting much from the metalcorers but it wasn’t long before they had the crowd with them. They even laid down a challenge to the Glaswegian crowd, prompting a pit and by the end of the second song the challenge was met and a pit was formed. This pit grew in numbers with every song and for a band that has never played in Glasgow they earned that pit (and their newly acquired fans of course!). The mix of dirty and clean vocals leads to a great show, I even felt the pull of the mosh pit tonight.
(8/10)

With The Dead XIII setting up and the devoted fans screaming, it was clear who everyone had come to see.  The photographers who had been occupying the space in front of the stage had been barged back and replaced by the fans.  When they finally started to play the pure energy on stage and in the crowd made was only contained by the ceiling of the venue. With them being on the more metal side of new grave they and their tour mates Griever were a perfect match. They have a fury of guitar riffs, a lion’s raw of a vocal and a heavy drum beat that will stick in your head for days. They have a great horror look on stage which will put a few people off before listening to them but, this adds to the live performance giving them great stage presence. They interacted with the crowd asking everyone to get down on one knee and jump up, however some fans missed the jump up command and sat there for a minute on one knee showing some true dedication. With ‘Catacombs’ being out for awhile the crowd were all singing along and pumping there fists along with every song. This is one of the few bands that you can get carried away on their sound and lost in the moment, I am already looking forward to seeing them live again.
(8/10)