Spoke Too Soon – Staring at the Wall 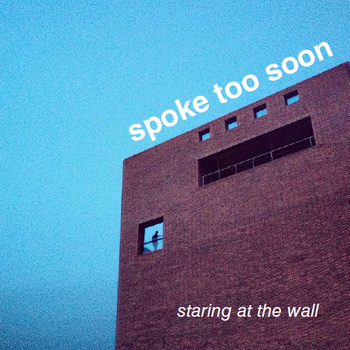 Scottish pop punk outfit Spoke Too Soon released ‘Staring at the Wall’ a little while ago but we decided to check it out…
Starting with the intro track cleverly named ‘Opener? I Hardly Know Her!’ which is  a noodling and oozing track filled with enough guitar licks to make your brain sore. Weighing in at 1 min and 31 seconds long, its short and sweet but provides insight of whats to come.

Second track is ‘All Mess’ which is a punk tinged song that has a progressive melody that seems to draw influences from indie rock as well as pop punk. The songs builds and builds to a mammoth ending after the 3:00 minute stage where instruments form together like a transformer to command your earphones with a Spoke Too Soon tailored breakdown.

‘Insomnia’ comes next following on with the fast and punchy style that Spoke Too Soon create so perfectly but this time it’s with a difference as a discrete addition of Ska influenced backing instrumentals is added to the fray.

‘Last Night Punch’ is a track where the gain is turned up full and the guitar work is just face melting. In comparison to other tracks on the EP, this is a real standout as it ebbs and flows from pop punk vibes to more hard rock sections which create for a rollercoaster of headbanging and embarrassingly playing your air guitar.

‘Head You Win, Tails I Lose’ is the closer of the 5 track EP which is interesting because I was expecting a slow burner anthem especially after the first 15 seconds that sound as if its gonna be a tearjerking anthem but the melancholic track weighs in more solemn than it’s predecessors but still maintains Spoke Too Soon’s style.

Staring at the Wall is a fine EP filled with enough thrills and spills to make it a worthy enough addition to your music collection. One of the main things I am going to take from this EP is the potential shown from it. I believe with more experience and better production Spoke Too Soon can take the nucleus from this EP and transform it into something truly great in their next release.