In amongst Angel shopping centre lies the Islington Academy, one of few old-school music venues still kicking about. Walking up the stairs the wealth of dried beer and B.O is so potent I can taste it. Through the double doors leads into the dark area… 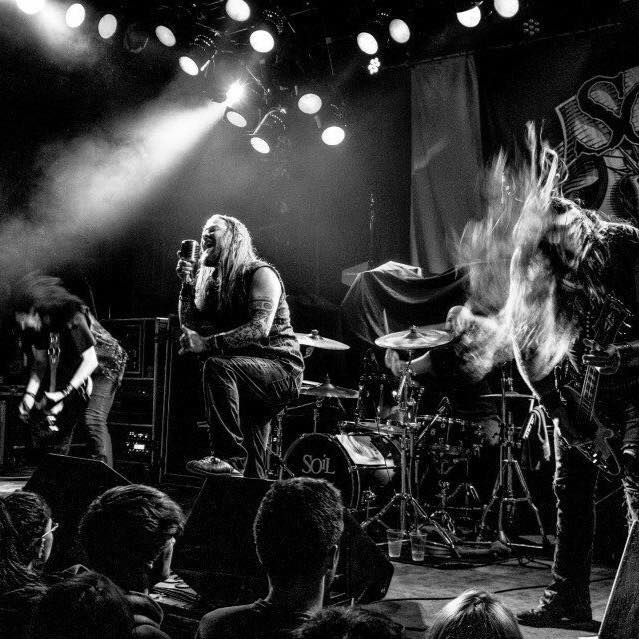 In amongst Angel shopping centre lies the Islington Academy, one of few old-school music venues still kicking about. Walking up the stairs the wealth of dried beer and B.O is so potent I can taste it. Through the double doors leads into the dark area.

On stage, Sons of Texas a 5 piece……from Texas. Lead singer prowls the stage in a Phil Anselmo-esque nature. Finishing their set with ‘Cold, Cruel and Content’, ‘Slam with the Lights on’ and ‘Baptized in the Rio Grande’ which is also the name of their debut album whilst finishing with Texas Trim a track about *cough cough* oral intercourse.
Time has come for the headliners, the main course if this was a restaurant, the band many in the audience have followed in their fifteen years of existence with some new ones too.

The lights are out, the band enters the stage as front man Ryan McCombs breaks in to ‘Wide Open,’ from their 2001 album, ‘Scars.’ Then ‘The Hate Song’ follows the opener. Another from ‘Scars’ is ‘Need to Feel’.
Devil horns erupt towards the dark ceiling where the extractor fan’s not working. First three songs allow the band to get in the groove, and groove they did. McCombs explains that fifteen years ago he saw the lights in London, that he’d never seen before. Thanking everyone for being with them since day one and thereafter.

Breaking in to ‘Cross my Heart’ after a lot of love was being given to Jimmy Barker. Ryan informs us Jimmy Barker has been getting more love on this tour than what their drummer has been getting. Who’s Jimmy Barker?
“The next two songs are from a time when I wasn’t in the band….and I need you guys help to sing these songs…because I don’t want to” a loud cheer of boos come across the scene. A bit of history of Soil as Ryan left the band to become lead vocalist of Drowning Pool.’ While members, bassist Tim King, tonight rocks a T shirt of Walter Hill’s masterpiece movie, The Warriors, along with guitarist Adam Zadel continued the band with a different lead singer. In 2011 Ryan McCombs’ re-joined Soil permanently.

Anyway, back to the gig the heat rises, I think the extractor fan’s working. Soil finish off with ‘Unreal. Before Ryan leaves the stage, re-appears in the mosh pit holding his mic high to the rafters. Extends his arm higher when he reaches the verse “I will stone you, stone you, Wrap my arms around you, I will stone you, stone you My little HALO”
The mobile camera phones come out to film him power through the song like a Don. These guys know how to rock and so do their fans

A pleasure to see these guys live and find the Sons of Texas.