Fresh from appearing as a headline act at Belgium’s Groezrock festival, Social Distortion sneaked in a cheeky slot at London’s O2 Empire on a busy, bank holiday Sunday evening. Support for the evening was presented in the form of Social D’s very own Jonny Two Bags and Jessica Hernandez & The Deltas. 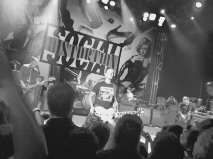 Fresh from appearing as a headline act at Belgium’s Groezrock festival, Social Distortion sneaked in a cheeky slot at London’s O2 Empire on a busy, bank holiday Sunday evening.  Social D, led by Mike Ness have been a punk staple for donkeys years and this tour marked the 25th Anniversary of their ‘Self-Titled’ album.  Support for the evening was presented in the form of Social D’s very own Jonny Two Bags and Jessica Hernandez & The Deltas.

If you are in fact a fan of Social D like myself then you imagine the excitement I felt as I approached my destination.  After getting really lost in the Westfield Shopping Centre, I soon found my bearings and wondered on my way toward The Shepherds Bush Empire.  Outside were exactly the types of Cliché I expected to see at a Social D concert, punks with fat Mohawks, rockabillies with slick hair and many other of the underground punk persuasion.  From a few conversations I had, many had travelled far and wide to see these guys in action.  The queue was starting to shape and people’s anticipation grew to be let loose inside.  Upon entering, I traversed down into the main stalls and upon arrival hit the bar for a drink and low and behold the guy behind the bar just happens to be a mate of old, king of the Yettis ‘Toby’ who welcomed me to this establishment with some free drinkypoos!

After wondering the venue and checking out the vast merch stand, Jonny Two Bags entered the stage and began his very own slice of solo action which draws inspiration from punk, country, blues and folk.  I saw Jonny support Dave Hause at the Bristol Exchange a while back just as he was about to release his debut album ‘Salvation Town’, I chatted to him for a bit, people would come up to say hello to chat and the most common question he got was regarding his name, to which his reply was simply ‘Drugs’.  He was a cool customer but unfortunately I think I was 6 pints none the wiser that night and think I pissed him off after a while, so Jonny if you read this apologies for that and I beg for Salvation!  Back to the action and Jonny was confidently ploughing through his set, entertaining the crowd with tracks off the ‘Salvation Town’ album including ‘One Foot in the Gutter’ and ‘Hopes Die Hard’.  It was great to have an opening act like this, a guy so ingrained within the ranks of punk culture providing us with a delicate calm before the storm.

The next act was Jessica Hernandez and the Deltas, I had not heard of these guys before tonight and was a bit sceptical because I wasn’t sure how this act would fit on this punk bill.  What came was a furious rampage of rock, with Soul and Latino flavours delivered with high energy, fronted by the impressive Jessica Hernandez.  I’ll give the band credit as it was a committed, high standard performance but for me this felt a bit too mainstream commercial for a shindig such as this but if you like you female fronted pop/rock then this band is right up your alley.

The venue was by now completely packed out and I saw my chance to get up close and personal in the action.  There was a whole mixture of people in the crowd young and old, all united as one now to see the colossal and mighty Social D rock their tits off.  Whether you know or like them, most start listening to the band from an early age and the music sticks, they are that kind of band that have been through it all and the fans keep loyal.  I spoke with 2 Distortion heads ‘River’ and ‘Liz’ in the crowd and they told me they’d been listening to these guys since they were fifteen and never looked back.  I find their music holds nostalgia and is the kind of punk that embraces the culture and surfs the edge of becoming pop, it stays firmly within the genre and mixes others such as Country, blues and rock n roll in the correct doses.  Meanwhile, the stage was being prepped for arrival and a screen at the back revealed a huge Social Distortion banner and soon after Mike Ness and crew entered to an eruption of cheers.  The band got straight into it with ‘So Far Away’ and as soon as that was underway I felt myself get farther away by being banged around in the moshpit. The energy was fierce and the band on top form.  First highlight came as the 3rd song in the set in the form of ‘Story of My Life’, once the band chimed the first chords the crowd went crazy and I found myself going with the flow of the pit.  As expected there were some crazy mofo’s swingin’ about but I think in general unity was prevailing.  The set was filled with some great tracks including ‘Cold Feelings’, Machine Gun Blues’, ’99 to Life’ and even a cover of The Rolling Stones ‘Wild Horses’.  Most of Social Distortions material is based on Ness’s life experiences, of hardship and troubled times. Having been to jail and stuck in gutter the redemption comes in the form of this music and this band.  You can really see this coming through when you see them live and makes this band a cut above the ‘norm’.  The band ended the set with ‘Gimme the Sweet and Lowdown’ and we’re enticed once again to the stage by the crowd and performed two more tracks.  Firstly was their rendition of ‘Ring of Fire’ which always goes down a treat and the other was ‘Don’t Drag Me Down’ which I think was a fitting way to end such an event.  I felt the trip and show was a success, 3 great acts with a 17 song set from punk legends, a reminder that this band is as high class as they come and by no means lost or forgotten even after 25 years.