The boys from Berlin, Smile and Burn, released their latest album ‘Action Action’ in October 2014. AltCorner writer Phil revisited it and gave his thoughts… 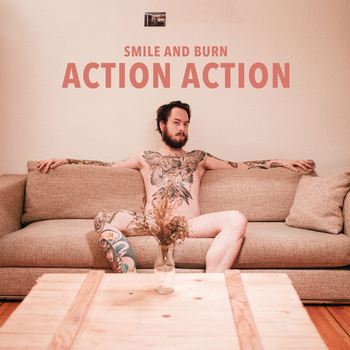 The boys from Berlin, Smile and Burn, released their latest album ‘Action Action’ in October 2014. In 2012, the release of their second album ‘We Didn’t Even Fight Yet’ and relentless touring saw them rise considerably in the European punk rock scene. The new album was released through Motor Entertainment and produced by Olman Viper. Full of highly energetic tracks, this new 12 track album promises some good old punk fashioned fun and a dance or two.

The album track ‘Action action’ is up first, and by all accounts is a perfect start to this punk rock inspired album. With big gritty guitars and grungy bass, when the main riff hits you it is hard not to nod your head. This track has special guesting from The Donots; an iconic rock band also from Germany that Smile and Burn have gigged with.

The drum grooves in songs like Nightcaps and Some To Fall cements the upbeat driven feeling that runs throughout this album and contributes to the bands undeniable punk style. All in all I would say if massive, high impact, sing along choruses are your thing, Smile and Burn have it covered. Tracks like Apologies And Alibis, Expectations and Access And Exits offer easy shout-out-loud lyrics that are bound to get stuck in your head. This album is full of group shouty vocals that are a crucial part of this bands ‘Let’s f****** do this!!’ attitude. This band must be a blast to see live, that is almost a certainty given the nature of their passionate and ‘in your face’ sound.

‘Dark-Blue Grey’ immediately stood out as a great jam as soon as the crashing drums start. At 4:23 minutes long it is the second longest track on the album, and for me is one of the most interesting. It is more rock orientated than the rest of the album, but the group vocals and harmonies are still strong throughout and ending has a really rich melodic feel.

Bands like The Virginmary’s and Billy Talent come to mind when I listen to this band, and that is definitely no bad thing. Smile and Burn have created a hard smashing, vocally melodic, fast paced punk album that is an honest pleasure to listen to. Hats off to the producer here too for a great mix. Anyone who is a fan of pop/rock punk and jumping around will 100% enjoy this band, no doubt.

These guys are set to support the American pop punkers, Man Overboard, on their UK tour along side Moose Blood and Roam in the spring of 2015. More information about the band and tour dates can be found here: http://www.smileandburn.com

The album is available on iTunes, Spotify and many other platforms so give them a listen, you won’t be disappointed!