After a weekend of nothing but heavy metal, what do you need most on the Monday night? More metal of course. So after Bloodstock Festival we find ourselves at Rebellion in Manchester for a night of thrash and death metal. 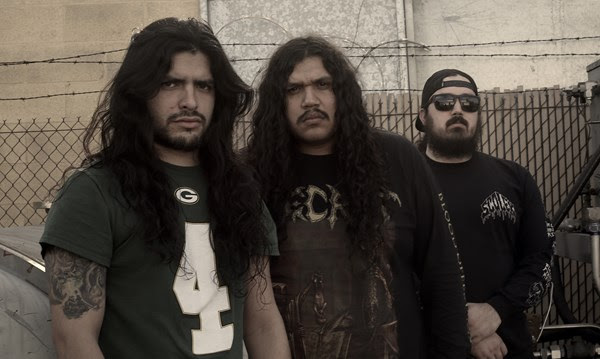 First up are RipTide, a young thrash band from Huddersfield. What these youngsters lack in experience, they more than make up for in excellent riffs, exuberance and energy to burn. And it’s not just all about wild abandon, the musicianship, particularly that of the two guitarists is excellent.  There are some great songs on display too; opener Masters Of The Apocalypse is a great way to start the night. This band are truly at their best when they lean into their inner Metallica though, with riffs that eschew technicality in favour of stomp and will leave you with a very sore neck. RipTide are a hugely exciting prospect and we should all be very excited for when their debut album drops.

Next to take the stage are Zealot Cult. Initially the Irish death metal quartet feel a little static and lacking in energy after the sheer enthusiasm and movement of RipTide, but this is only a brief adjustment. Where the prior feel like a flurry of differently-styled light punches, Zealot Cult is the equivalent of being punched hard in the gut over and over again, slower, but with a far more lasting and brutal impact. Songs like Sea Of Suffering from debut album Spiritual Sickness don’t sound like a band in their infancy, they sound like a band many years and albums into their career, practiced in destroying rooms.  Also, we should definitely launch an investigation into how many limbs the drummer Declan Malone has, because if it’s only four, we should burn him as a witch. His ability to be seemingly all over the kit at once is absolutely mesmerising.  By the time their short set ends, they have truly found their stride and it’s a shame when they finish, but they’ve definitely made a lasting impression.

Blasphemer first appeared on the UK metal scene back in the early 1990s rereleasing several influential demos before breaking up. Since reforming in 2014 they’ve released two full-length records, most recently Lust Of The Goat. Tonight however, they feel somewhat off the pace and although there’s a crushing rendition of Child Catcher, it’s a rare moment that stands out amongst a workmanlike set. It might be because of the momentous company in which they sit, but unfortunately tonight is not Blasphemer’s night.

It is, however, very much Skeletal Remains’ night. They take to the stage a little before 10pm and proceed to make the next 40 minutes feel like 15 as they unleash their vicious brand of old school death metal. There is very little between-song patter, they just put their heads down and play, but when you can throw out songs like Catastrophic Retribution and Beyond Cremation, the crushing riffs and Chris Monroy’s demonic howling do the talking. His vocals really are something to behold, an excellent range from low guttural growls to bellowing screams that sound like they are being beamed direct from the depths of hell. That he can do this while combing with Adrian Obregon to peel out epic dual leads on Devouring Mortality is nothing short of outstanding. The band’s use of silence to completely cut off for a moment, before smashing back in with a neck breaking riff on Torture Labyrinth and Ripperology, is excellent and truly adds as sense of atmosphere to proceedings. The latter also showcases how great the aesthetic image of this band on stage is. Whilst it is not important and by no means should we be telling every metal head to never cut their hair, there is something magnificent about the in synch headbanging of the three long haired men at the front that accompanies the final attack of Ripperology: they look like a death metal Scorpions. For a band who’ve been going less than a decade, they appear to have everything honed to a sharp point. Long may they reign!