Six Time Champion have released their second EP in the form of Expecting Honesty. The Brighton based 5-piece take on the extremely hard to perfect challenge of genre blending. Fortunately for them, they do it well by combining catchy pop melodies with hard hitting instrumentals which wouldn’t sound out of place within some of the […] 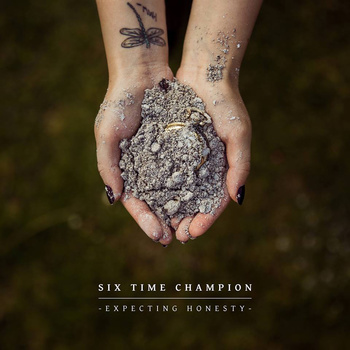 Six Time Champion have released their second EP in the form of Expecting Honesty. The Brighton based 5-piece take on the extremely hard to perfect challenge of genre blending. Fortunately for them, they do it well by combining catchy pop melodies with hard hitting instrumentals which wouldn’t sound out of place within some of the finest hardcore punk bands out there.

Pop Punk is a genre which is in the midst of quite a revival within the UK with bands such as Neck Deep, Gnarwolves and Decade all growing to become very popular outside of the underground scene. Whilst this is great, it creates a benchmark that all pop-punk bands must aim to reach. For Six Time Champion this EP shows that they are a band that have found their comfort zone, which is by no means a bad thing. The EP chops and changes between riffs, sing-a-long melodies and damn right awesome lyrics which in many ways encapsulates everything that is needed from a good pop-punk release.

The band cites Such Gold and The Story So Far as some of their main influences and whilst those influences shine through, Six Time Champion have enough about them to distance themselves from the rest of the bands who fall short in trying to put their own spin on the established pop-punk bands. I hear a very ‘Ocean Avenue’ (Yellowcard) vibe to this EP and that is a massive compliment as that is an album that is considered one of the best amongst pop-punk diehards.

Every song provides a slice of fast-paced and upbeat gold in which you can’t help but tap your feet or rock your head to. It has tracks which you instantly think “who does this sound like?” and that’s not because they are plagiarizing other bands, they just have combined the sounds of some of their presumed favourite bands and put their own spin on it, which in my opinion is great.
My personal favourite track on the EP  is ‘Expecting Honesty’ as it has a real polished 90’s vibe to it which i totally dig and it was a song I keep finding myself coming back to for more. Other favourites within the Alt Corner HQ was ‘Running Dry’ and ‘Separation’.

I think the main thing to take from this EP is the progression Six Time Champion have made from their first EP, Old Friends, Loose Ends and that Expecting Honesty shows that they are a band brimming with talent, potential and everything in between. When they eventually come to release their full length, if they can make an album of songs as good as these 5 then they could just be the next pop-punk sensation.