Senses Fail – Pull The Thorns From Your Heart

Senses Fail are set to release Pull The Thorns From Your Heart in the next few days and Brad reviewed it, billing it as “Senses Fail’s greatest release to date”… find out why here! 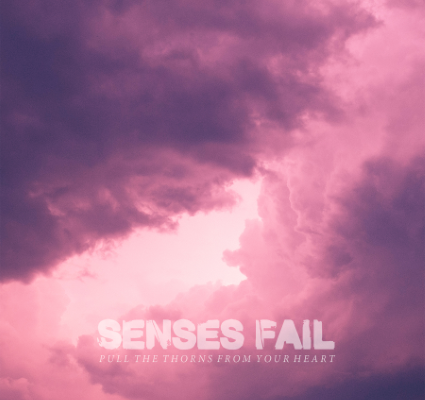 Senses Fail first formed in 2002 shooting out of the traps with their Pop-Punk tinged brand of Post-Hardcore notably leading to now synonymous tracks ‘Can’t Be Saved’ and ‘Buried A Lie’.

In 2013, Renacer was released it was the New Jersey bands fifth output and ignited the fire within Senses Fail to progress into the band they are today. “Renacer was the beginning for the next decade of Senses Fail” recalls lead singer, Buddy Nielsen as they moved towards a more heavier style. The statement of intent the band made with Renacer was ground-breaking both for fans and for the band themselves.

Pull The Thorns From Your Heart is the latest release and another instance where Senses Fail further distance themselves from their previous work, billing it themselves as their “boldest release to date”.

With their newly found freedom to create the music they want to create, Senses Fail certainly went creatively insane on this new record but fear not itis in a very, very good way. At times the album is a ferocious hard-hitting emotional rollercoaster of angst-driven tracks yet, on the flipside there are some more, dare I say, calmer tracks that still maintain this quite inspiring aesthetic Senses Fail have created. Inspiring being the key word in that sentence for sure as the philosophy of Pull The Thorns From Your Heart is to not match the heaviness with cries of despair but instead with words of growth, change and inspiration.

Tracks like ‘Carry The Weight’, ‘The Importance Of The Moment Of Death’ and ‘We All Are Returning Home’ showcase the newly found lyrical style of inspiration by Senses Fail the best as they offer up some of the finest and most relatable lyrics of their career to date.

Tracks like ‘The Courage of an Open Heart’ and ‘Dying Words’ see Senses Fail at their heaviest we ever have seen them but thankfully they maintain that spark and melody that made their older material so popular. This album really is a masterpiece from start to finish…what an adventure it is!

The scrutiny that bands receive once they change or evolve their sound is often unfair. After all, if Senses Fail released six albums that sounded just like Let It Enfold You, they would be criticized for their lack of development. Similarly since their sound has changed over the years there are some fans who disregard the new direction and people who do that, I feel really sorry for you. Pull The Thorns From Your Heart is Senses Fail greatest release to date and if you embrace the band that they have chosen to become instead of clinging onto the band they once were, you will love this new album.

Their old tracks are always going to be there and no matter what Senses Fail do they will never forget their roots but, Pull The Thorns From Your Heart is created on the ethos of creating the music they want to create with no financial gain as the backbone like many band style changes are led by. This is the NEW Senses Fail; a passionate story of how you’re not alone and that you can make it through life.