Periphery and Plini at 02 Ritz Manchester

Having blown everyone away with the release of Periphery IV: Hail Stan earlier this year, Periphery arrived in Manchester and put on an excellent show for a sold out audience 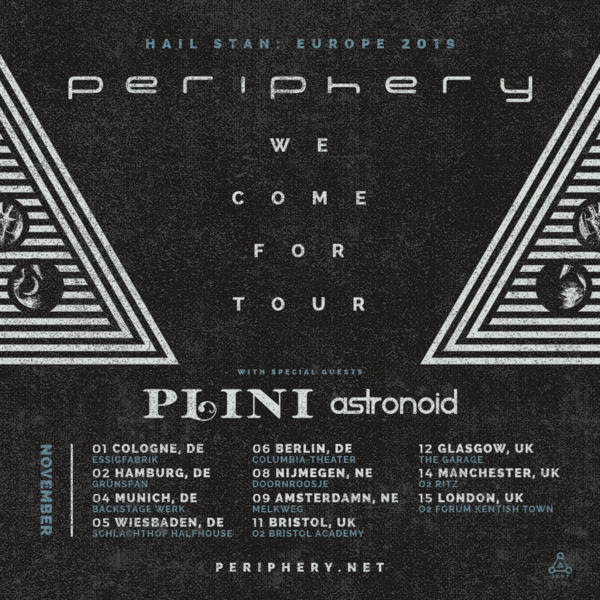 This review should open with Astronoid, but thanks once again to the utterly useless rail services of the UK, they played before I entered the venue.

The night, for me, begins with the unbelievably talented Plini, an Australian guitarist with his backing band playing vastly expansive instrumental music. The talent on display across this band is unquestionable, every member a virtuoso and they all get multiple solo turns to showcase that skill. But, at a certain point this feels very much akin to watching someone do incredibly complex algebra on stage: if that’s what you’re into and you have the time and the passion to truly study it, it must be utterly thrilling, but for the uninitiated, it is something very impressive that means very little.

And so  Periphery take to the stage and, despite being a man down due to the absence of Mark Holcomb as a result of family issues, they take the brilliantly brave step of opening a live show with a 16 minute epic, Reptile, the opener from the latest album Hail Stan. The song loses absolutely nothing in the retelling and the fact that they can perfectly navigate it’s twists and turns says something about the musicianship on display in this band.

It is certainly noticeable that Holcomb is absent, particularly on the more chugging guitar driven moments, but the band do not let this get in their way at all, altering some arrangements and generally showing themselves to be hugely versatile.

It’s not a long set, and it is packed wall to wall with excellent slices of tech metal brilliance. The crowd is a swirling mass of bodies during CHVRCH BVRNER and Psychosphere, and the whole room feels like a party during the joyous It’s Only Smiles.

Periphery have shown their brilliance once again on record this year, and they have now continued their reputation as a stunning live band too. A decade into their career, they show no signs of slowing down, and judging from this sell out show, we should see them in even bigger venues soon.