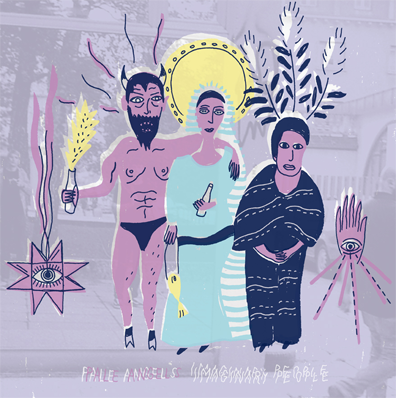 The brainchild of Mike Santostefano (Guitar – Crimes and ex-Static Radio NJ) and Jamie Morrison ( Bass – The Arteries and Ssssnakes) Pale Angels is a transatlantic 3 piece originally completed by drummer Mikey Erg (The Ergs) but Chris Krause (Crimes and Rescuer) has taken position as beat maestro.  Forged out of drunken night whilt touring, this is more than just a side project, the Angels have already released eps and their first lp was aptly named ‘Primal Play’ through UK based Specialist Subject Records to acclaim within the underground punk world.  They play a rough, rugged and raw grunge, garage punk rock amalgamation which is reminiscent of the 90’s Seattle / Alt rock sound that will give you nostalgic undertones of a band who was born from that very scene.

The new album Imaginary People is another unabashed triumph of the Pale Angels grungy punkyness which will reinforce their place as not just another side project but as an established entity.  The album as a whole, kind of blends together as a hypnotic fuzz which draws you in from the word go.  The servants are being served by being given a slice of the old school, slow whiny grunge sound with the track ‘Lapin, Lapin’, I’m not particularly sure if this an ode to rabbits but the vocals are certainly a little bit furry and straight out of the heart shaped box.  Throughout the album you are given blasts of aggression that grips you into a hypnotic fuzz with bangers like ‘I’m Nobody’ and ‘Ditch Digger’ and then to contrast you are given something in ‘Schizophrenic Affair’ which I can only describe as comparable to a Britpop band from the 90’s, I know what you’re thinking, ‘that sounds whack’, ‘this has no place here’ but the Angels certainly pull it off and put their stamp on it and stands out in the fuzz as being one of the better tracks on the album.  As I mentioned the album seems to blend together but the end two tracks ‘Dreamer’ and ‘All her Clothes’ are pretty obscure but I kinda get how it ties the album up in a fuzzy ribbon.  The album is a good listen if you’re into raw music with a few twists, some depressing moments with some echoes of obvious influence.  Imaginary People is not reinventing the wheel or anything but more of a ruggedly creative homage to 90’s alt music and by the sounds of things having a great time doing it!