Omaha, Leopards, Atlas and Coastline At The Garage Attic, Glasgow

Gareth went and saw Omaha, Leopards, Atlas and Coastline At The Garage Attic, Glasgow and here is his thoughts of the evening… 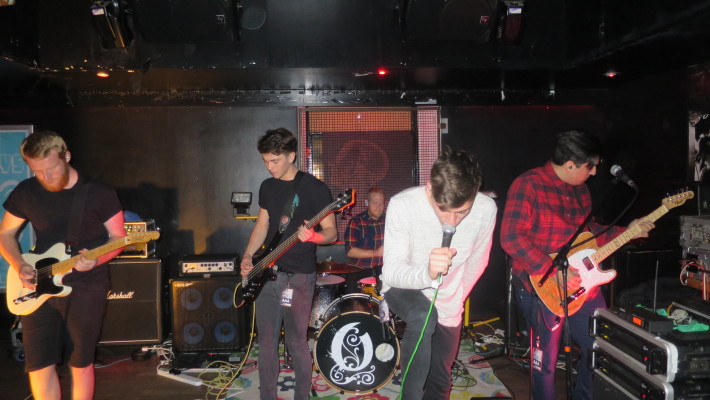 For this gig I head to the now ever-familiar to me; Garage Attic. The one thing you need to know about this venue is that the entrance is round the back of the garage on the side of the G2 so if you have never been here before this can be hard to find…trust me! The venue itself is up a narrow stairwell so it is definitely not recommended if you are claustrophobic. The venue itself has an alternative vibe to it and the space is a ‘L’ shape so on a sold out gig you can be left without a view of the bands.

The first band of the night were Atlas. They are female fronted three piece and I would like to say thank to this band for playing tonight. Unfortunately, their drummer left the band two days before this show but, rather than pull out of the show last minute they “whipped” a friend (Santino) to play drums for them. Due to this they mainly played covers. The covers they played where: Since You’ve Been Gone, Four Five Seconds and Shake It Off (which I liked). These guys showed true professionalism by playing tonight and they definitely have the right attitude when it comes to playing live shows. I will be interested in seeing them play again when they have sorted out a full-time drummer.

Up next were a female fronted five-piece who create fantastic dirty pop-rock…Coastline. I had heard a lot of good things about this band and I had been looking forward to their set for a while. They look good on stage and had a nice thrash guitar sound. However, there was no riffs or hooks in their songs but this is not always necessarily a bad thing. Ashley (lead vocals) did try to throw some energy into their on stage performance but, with the small stage their was little room for her to move around. The bands clear strength is in Ashley vocals; she has one of those dirty pop voices that really engages the listener. They have clearly been building their sound around this and it works well. Through no fault of their own, unfortunately on this night her vocals were far too quiet which took away a lot from what was a very good performance. At the end of their set they played two new songs and they had a greater appeal for me and really showed a good evolution from their earlier songs.

I was eager with anticipation as one of my favourite unsigned bands took to the stage. Leopards are a female fronted alternative rock band and every time I see them live they get better and better. They are one of the most energetic bands on stage you will see; all the way from Rhys (on drums) to Jenna at the front. Similar to the previous bands, the stage was too small and threatened to hold them back but to sort this issue out, Billy (bassist) just pushed the barrier forward so they had the space to give us the performance we wanted. I am always amazed that they don’t jump into each other or even knock each other unconscious when they play…they are that crazy! Tonight was the first time I’ve seen them knock into each other though, with Billy hitting Ben over the head with his guitar, and breaking a monitor (maybe cut back on the whey proton shakes Billy!). The guitar in their live performance just makes me smile from ear to ear with their energetic sound. Jenna’s voice is one that can one minute possess a low tone that feels like a rhythm guitar then remarkably with her impressive vocal range go high as she can take you on an emotional journey through their set is still a mystery to me.

Headlining were Omaha who are a great pop-rock band. How they are not bigger than what they are is beyond me. These guys provide a sound that just reverberates through you without making you feel too uncomfortable. Jack is one of those singers that tries to make everyone in the crowd feel part of the show and you can tell he feeds off of crowd interaction as he builds everyone in attendance into a frenzy. It seem to me that he hated the barrier between him and the crowd and he would have much preferred to stand with us in the crowd and jump around. If you like Don Broco, Young Guns, The Afterparty, Chasing Cadence or Speaking in Shadows you will love these guys.