Neck Deep – Life’s Not Out To Get You

Elizabeth Birt had a listen to British Pop Punk pioneers Neck Deep’s new release ‘Life’s Not Out To Get You’, does it hold up to their previously renowned material? find out here… 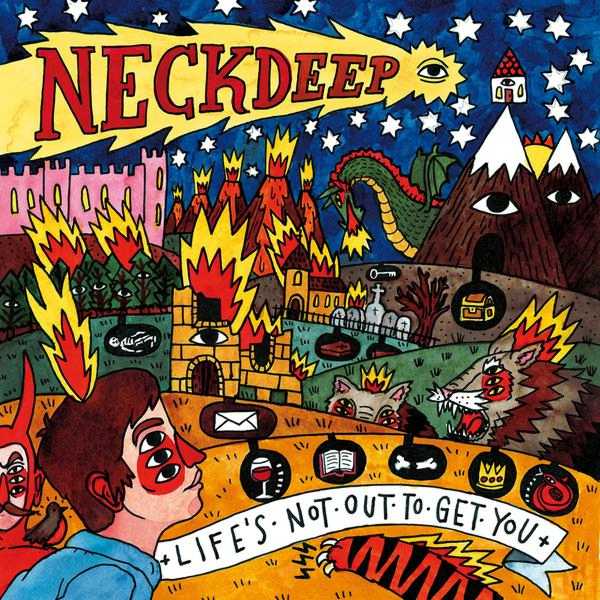 Life’s Not Out To Get You is a highly anticipated album from the Wrexham pop-punk quintet. From the opening seconds of track one – Citizens of Earth – it is clear that this is an album going against the grain of recent pop-punk releases in that it focuses more on the punk side whereas the majority focus on the pop element. With the riffs showing the influence of album producer Jeremy McKinnon (A Day To Remember), and the lyrics starting off a relatable theme amongst many people of life’s hardships.

Threat Level Midnight is akin to Blink-182 even down to vocalist Ben Barlow’s tones sounding eerily like that of Tom Delonge.

Lime St opening bars seem to suggest a slightly calmer track, delving into the theme of taking time out of relationships, another seemingly Blink-182 influenced track.

Serpent, one of the more lyrically darker tracks on the album, however a deceptively brilliant song with calmer instrumentals and a slower, yet still sort of upbeat, beat. The lyrics show the progress in their songwriting skills.

December, a month we all associate with beautiful snow (if we’re lucky to have any) and happiness over the festive season, but now we have another associate for the last month of the year with this beautiful acoustic ballad. The song talks about heartbreak and really puts a shine on the bands songwriting skills. Even in the downbeat lyrics, hinting at regret and loneliness, there is a hint of PMA and looking back on the past and reflection, something that will be relatable to the majority of listeners.

Rock Bottom, an upbeat closer to an incredible production with lyrics about hitting rock bottom and starting again, another relatable theme for many of the country’s youngsters.

The album is very positive mental attitude, with the majority of lyrics saying about making the most of life, again going against the grain in pop-punk with relatable themes that don’t just revolve around girls and parties. The energetic riffs with smooth overlaying vocals ensure that this album is one that will be raved about for a long time and could even propel the quintet to the stadium level of label mates All Time Low, with the tracks certain to feel at home being played to thousands in the world’s finest venues. The album will be the go-to album for many with tracks for almost every mood or situation they would be feeling. With its Blink-182 feel, the album is likely to appeal to those old-school pop-punk fans as well as the new wave of fans.