I made a ‘quick’ trip down from Glasgow to Wakefield to this small festival that took place at the Warehouse 23. The festival was in aid of Barnsley and Wakefield Hospice. 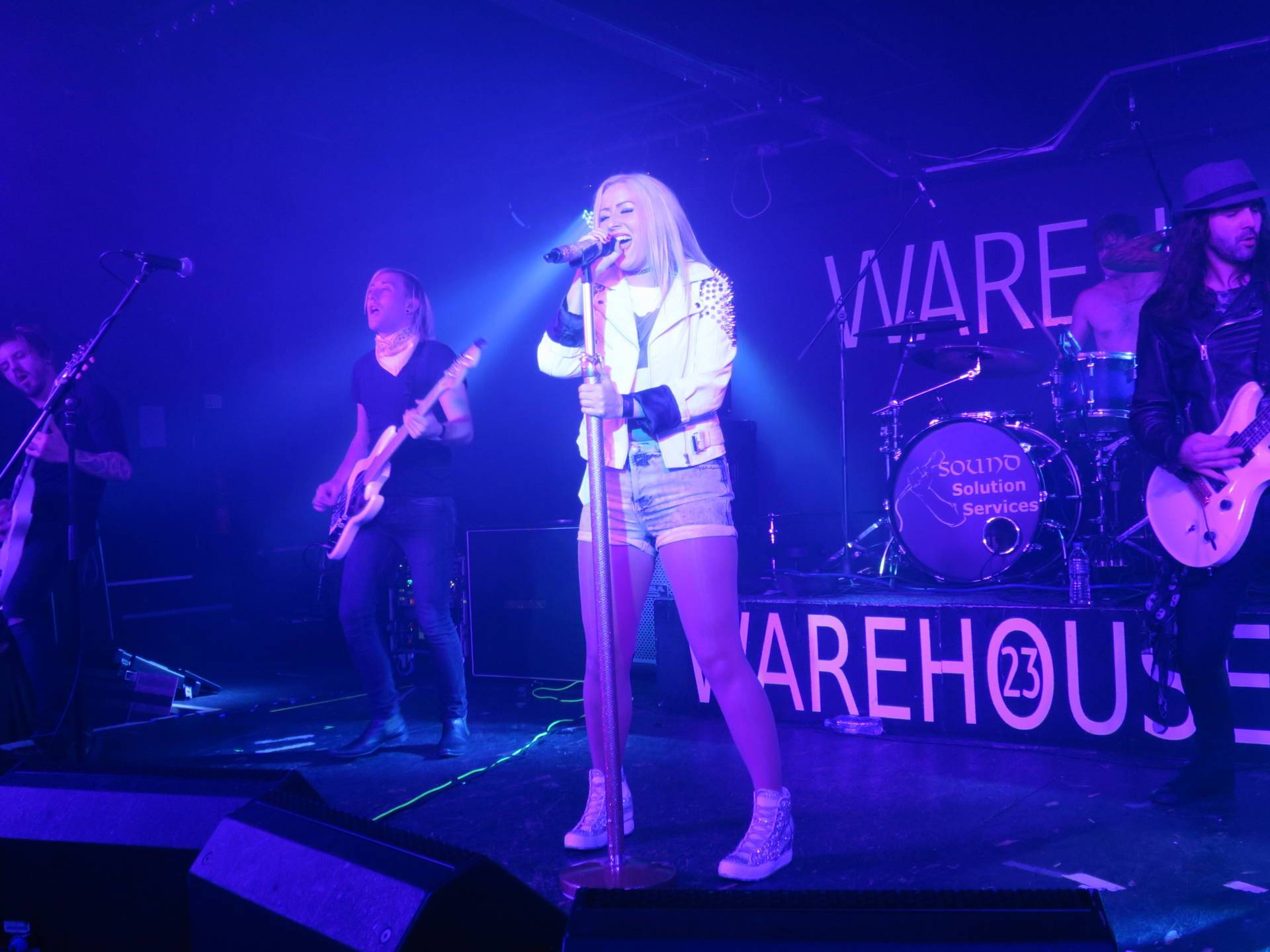 I made a ‘quick’ trip down from Glasgow to Wakefield to this small festival that took place at the Warehouse 23. The festival was in aid of Barnsley and Wakefield Hospice.

The first band up was Invisible Idols.  Simply two guys, two guitars and a classic old school rock and roll sound with a strong blues vibe. I could easily listen to them for hours and hours. They strictly are no longer a band and were even able to joke about splitting up as their drummers keep leaving.

Up next were Hands off Gretel who are full on grunge! From the start they hit the crowd with their dirty grunge guitars and the crowd was theirs. Lauren  Tate has a dirty rock vocal style that she executes perfectly with that scream-but-not style of singing synonymous with Grunge. Grunge has come a long way since the 90s but most bands try to keep to the roots, Hands Off Gretel really capitalize on their generation in terms of high-quality and crisp sounds but the grunge aesthetic is still very much present. Something I love to see is when a musician loses themselves completely to the music and that is exactly what Sean their guitarist did and it blew me away. This is the best grunge band I have seen live a since 2000.

The Prop Doctors arrived on stage  in their waistcoats and I was worried I was getting a Status Quo tribute band or a wedding band. What I got was not a Status Quo band but a Genesis and Status Quo covers band. They knew what they were and even joked about it in their introduction. They were okay, it’s just I am not the best to judge them as this is an area of music that does not interest me. They were not for me.

When Captain Horizon entered the stage they began with energy and did not let up one bit during their time on the stage. The are truly are one of the most energetic bands I have seen. They even jumped in the crowd and partied with us. They give 500% on stage and they will put their heart and soul into any live performance. During their last song the singer even came into the crowd to hug ever single fan…a truly brilliant touch. However, as good as their performance was, the set could have been all one long song…as my only criticism they are a little repetitive.

Next order of the day was Metal from A Thousand Enemies.  As a metal band they had a good feel and were almost easy to listen to. I personally would have like to have heard a little more guitar from them but this was a good set with a solid sound.

Falling Red were next up and delivered a rock sound with a New Grave vibe. There was a great drum beat which won me over and had me bobbing my head throughout. They had good energy on stage that kept the crowd excited and they were the first band of the night to have the crowd all huddled around the barrier trying to get a better spot. It has been a long time (it could have been as far back as a school disco when I was drinking panda pops) since I have been to a venue where a band split a crowd into guys and girls to sing back to the band separately, in competition.

With Matt having already performed in Invisible Idols, he now took to the stage with his band Farhan. They have a great sound with a bit of classic rock vibe hidden in the back of the songs. Excellent energy on stage and had plenty of guitar hooks that made enticed my feet and head to bop along. You should go and check out their song ‘Cased in Steel‘ as that is a true masterpiece.

Crimes of Passion took to the stage next. I try not to say anything negative about bands but, the singer of this band really grated on me. He needs to understand that this festival is not the next download and that this was a charity festival for Wakefield and Barnsley Hospice. He is not Axl Rose and they are not playing to 100,000+ people. They dispersed the crowd that had been at the barrier since Falling Red and only brought won a few over with bribes of free merch. That being said they had a good late 80s Classic rock sound but based on this performance, I would not see these guys again.

When Eva Plays Dead  took to the stage tonight I got a slightly different performance.  A little less fun and a lot more attitude from vocalist Tiggy. This caught me off guard as last time I saw them play she  on commanded the stage like Jessica Rabbit. Her vocals were still siren-like and had you glued to every word but the ‘fun’ stage of this presence of this band was sadly not present. However, the attitude when she sang ‘Easy to Hate‘ which is about an ex-boyfriend was just one example of how tonight felt like an assault (which I liked) of heavy rock where they held nothing back. They ended their performance with Tiggy leaving the boys on stage to play out, finishing with them leaving their guitars on stage reverberating. A true statement from a fantastic band.

Headlining the Festival were The Dirty Youth from Cardiff. They came on stage and really gave it some. They have this infectious rock guitar riffs that I could not help bang my head too. With the lively energy of singer Danni on stage and her powerful but easy to listen to vocals, these guys provide a very heavy but sweet sound that I love to see live.  With a good mix of songs from their Red Light Fix and Gold Dust albums all the crowd was happy. If you want to know what this band are about and how good they are, go and listen to their song ‘Fight‘ or a song I refer to as the anthem about my life ‘Requiem of the Drunk’,  which once you hear it live you will find yourself sing it for days “La la la la la la let’s get drunk!”

For this festival it was easy to pick out my favourite performance, it was by far the Grunge sound of Hands Off Gretel.