Team Walf and Brooklyn Bowl Rising Rocks presented a brilliant lineup showcasing four of the best up and coming alternative rock bands in the UK. First on the bill was Mummy, a sludge/stoner rock four piece. The band came on to a still gathering crowd, with little response. However once they started playing more people […] 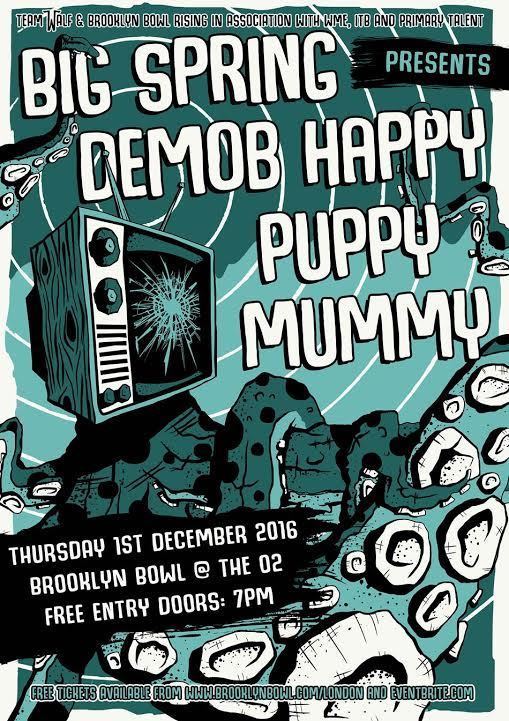 Team Walf and Brooklyn Bowl Rising Rocks presented a brilliant lineup showcasing four of the best up and coming alternative rock bands in the UK.

First on the bill was Mummy, a sludge/stoner rock four piece. The band came on to a still gathering crowd, with little response. However once they started playing more people started paying attention, and moving away from the bar and to the dance floor. As the band rattled through songs predominantly off their most recent EP Milk, they seemed unfazed by the bowling tournament also going on in the venue, even jokingly asking to join in and for some free pizza from the buffet at one point. This was an impressive opening set from a band early on in their journey.

Next up were Puppy, a three piece alternative stoner rock band combining massive riffs with Corgan esque vocals. This perhaps odd combination translated brilliantly on stage and instantly had the crowd hooked. Although they only have two EP’s under their belts (both released this year), the trio looked very accomplished on stage, with songs such as Great Beyond and Entombed being particular highlights, the latter seeing the whole crowd head banging in unison. This was my, and by the looks of it a lot of others’, favourite performance tonight, and definitely suggests Puppy should be considered one of the bands to watch in 2017.

Being given the difficult task of following Puppy were Demob Happy, a psychedelic rock trio, drawing comparisons to Queens of the Stone Age in style. Dressed like they came straight from the 70s the band played songs off of their 2015 debut Dream Soda. The powerful riffs and trance like vocals drew the attention of the crowd and built an impressive atmosphere. The only down side to this set would be the bands poor time management, as they were unable to finish their final and most recognisable song Succubus due to running over their strict time slot. This like those before was an accomplished set from another impressive up and coming band.

The final band on were Big Spring, a four piece with a heavy grunge influence in their sound. Playing to a slightly smaller crowd than those before them, Big Spring proved why they have received the backing from the Radio 1 Rock Show, with the singles Buzzards Leave the Bones and On a Bamboo Sleeping Mat, sounding huge on a relatively small stage. This was a well-executed closing set from a band who undoubtedly have bigger things to come.

This show was a brilliant example of some of the best up and coming bands in the UK with Puppy being the highlight of the four.