The EP sees a more mature and well rounded approach to both their lyrics and creation but thankfully, their punk edge isn’t lost and is very much still there. 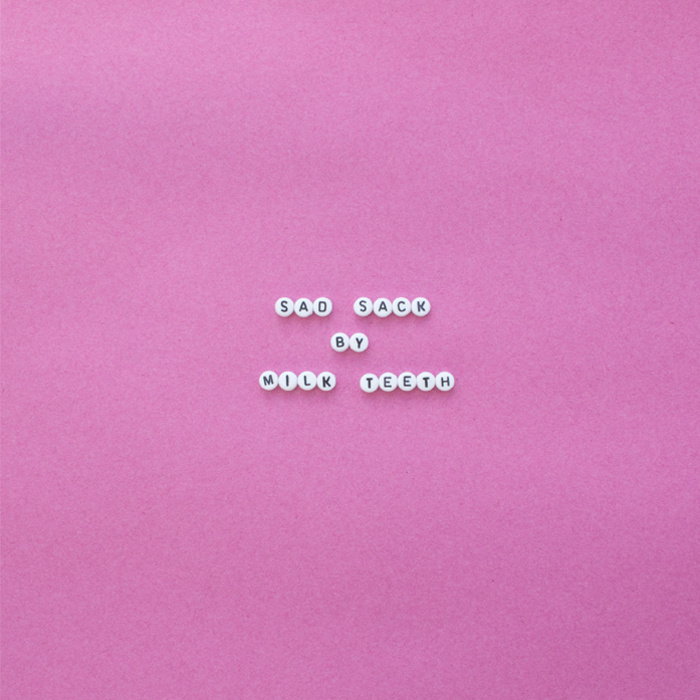 If you don’t know who Milk Teeth are you must of been living under a rock. Famed for their frantic and exhillirating live performances which have gathered them a considerably large fan base when compared with their short time as a band. The band released ‘Smiling Politely’ in August of 2013 and it’s an EP that announced Milk Teeth as a real forefront in 90’s grunge/punk revival.

After releasing  Smiling Politely, Milk Teeth went on numerous tours with bands like Seahaven, Balance and Composure and Hindsights to name a few as well as doing an acoustic set at Download Festival. Perhaps their best part of 2014 was joining Venn Records who saw their potential and matched it both with backing and support to enable Milk Teeth to really grab the bull by the horns.

This is exactly what they’ve done with ‘Sad Sack’ which is a fantastically crafted EP and for me the best part of it is the progression they have made from Smiling Politely. The EP sees a more mature and well rounded approach to both their lyrics and creation but thankfully, their punk edge isn’t lost and is very much still there.

The EP begins with ‘Vitamins’ –  a track that Milk Teeth released almost immediately after announcing their signing to Venn Records and it sounds as good now as it did when I first heard it. It’s an infectious whirlwind of punky angst delivered with beautiful riffs and mesmerizing drumming which will engrave the tune into your mind until the end of time.

The second track ‘Melon Blade’ is not only the best song on the EP, i believe it’s one of the best songs Milk Teeth have ever released. It has every single element from what they’ve came to be loved for and fuses it all to create a song that’s just….awesome! The song reminds me a little bit of Placebo in places(notably towards the end) and Smashing Pumpkins which is a huge testament to the band. The song lets every member show off their talents with Guitars from Chris and Josh being exquisitely delivered alongside Becky’s great vocal and bass to Olivers’s  charismatic drumming; the whole song is just great.

Then comes ‘Linda’ which is an emo-tinged throwback track which uses a constant up and down theme conveying the themes of growing up. It’s full on anger driven punk song with Becky’s soft vocals embossed by Josh’s wails of “We’re All Liars Here, Your Youth Is Rotten To The Core” which ebb and flow to create a sing-a-long emo feast.

‘Bagels’ is a disjointed track and serves as the ‘difficult’ child of the EP. Not that it’s a poor song  because it is a very good track but in comparison to the rest of the EP I feel that it’s more suited to being on ‘Smiling Politely’ as opposed to ‘Sad Sack’. It’s a song I feel that will be a real hit live but when listening to this EP as a whole it feels like a drastic departure from their new and polished sound.

‘No Fun’ begins with a heavy drum intro which spills over into riff heaven as the song builds into a mysterious almost metallic song which eclipses into a mammoth chorus topped with the shouts of “I’M IN DECLINE”.

The last song of the EP, is ‘Trampoline’ which starts very melancholic and in true trademark Milk Teeth style slowly generates into an ‘in-your-face’ track but the constant changing from heavy to melancholic makes this song a real impressive closer both for showing their diversity but also their fantastic song writing and composing.

Overall, ‘Sad Sack’ is a quite marvelous release from the Bristol four piece. Their ability to mature their sound without losing their spark of punk ecstasy is an ability that can only be praised. It’s the best release they’ve done so far and it feature songs like ‘Vitamins’ and ‘Melon Blade’ which are to sure serve as the key to unlocking the next step in their ever-growing reputation and career. On a side note, if Milk Teeth tour in your area…GO SEE THEM.