The weight of expectation must be lying very heavy on the shoulders of Marmozets. Having burst onto the scene with their magnificent debut album The Weird and Wonderful in 2014, they have been absent for nearly 2 years following Becca’s recovery from a serious knee injury. It now transpires that they have not been idle and that […] 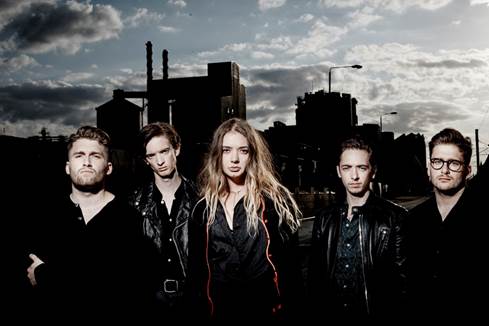 The weight of expectation must be lying very heavy on the shoulders of Marmozets. Having burst onto the scene with their magnificent debut album The Weird and Wonderful in 2014, they have been absent for nearly 2 years following Becca’s recovery from a serious knee injury. It now transpires that they have not been idle and that this has not been downtime. A new album is recorded and ready for release, a new single premiering on Radio 1 and an expansive second tour already announced for October. The stage is set for the return of one Britain’s most exciting bands.

First up on the stage in the Arts Club Loft are Strange Bones who, from their shirts bearing the phrase ‘Theresa is a terrorist’ to their electrifying lead vocalist, are unashamedly in your face. The sound is a blend of the heavier end of British indie, with a Clutch-esque groove and swagger and a political edge . Although at first the crowd seems unsure what to make of them, they soon come around and by the end everyone is transfixed. This is a band you cannot take your eyes off and a real act to watch out for.

Any other band taking the stage after Strange Bones might have been upstaged, but nothing is stopping Marmozets tonight. From the moment the drums kick in on set opener Move, Shake, Hide the atmosphere is explosive and the whole floor becomes a sea of flying bodies.  With an album as flawless as their debut, you’d forgive Marmozets for coming back and just playing a set entirely from that LP, but they include not one, but five new songs in the short hour long set and they don’t feel lulls in the flow.

Play and Habit in particular both feel vibrant and exciting in the live environment. Slower songs like Captivate You and Hit The Wave cause venue-wide singalongs while the more energetic Born Young and Free is pure mosh fuel. The band are tight and Becca Macintyre is as magnetic a front woman as you could imagine, displaying both a rock god-like persona during the songs and a real honesty when telling the crowd how excited she is for us to hear the new album. They close with the stunning one two punch of Why Do You Hate Me and the mathy riff storm of Vibetech. This set is entirely triumphant and the Marmozets look set to take the UK music scene by storm…. again.