On a day where the people of Wales descended on Cardiff to celebrate the final day of the 2017 RBS Six Nations Championship (and drown their sorrows after Wales’ heartbreaking loss to France), rock fans were heading to Cardiff University’s Great Hall for a different reason. The reason; Lower Than Atlantis are closing out their […] 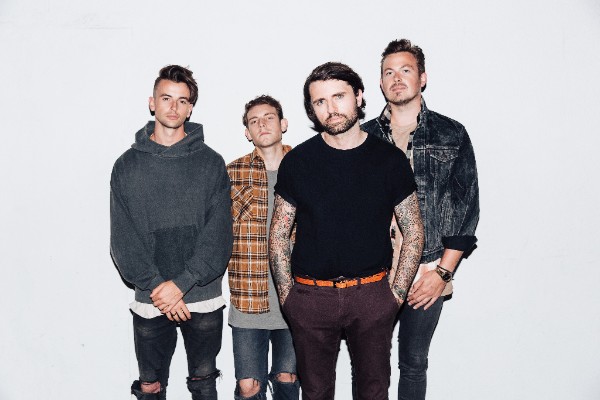 On a day where the people of Wales descended on Cardiff to celebrate the final day of the 2017 RBS Six Nations Championship (and drown their sorrows after Wales’ heartbreaking loss to France), rock fans were heading to Cardiff University’s Great Hall for a different reason. The reason; Lower Than Atlantis are closing out their UK tour at the venue.

First up were ROAM and sadly I missed most of their set due to the queue outside and how slow the staff were in letting people in (sort it out Cardiff!) but the two songs I did catch, sounded good and had the signature ROAM energy and enthusiasm and the crowd that were already inside for their set seemed to enjoy them, so it’s safe to say they did a good job as usual.

Hands Like Houses take to the stage they were last on all the way back in October 2016 (yes I know it isn’t long ago but sssh!). They bring energy and some banging tunes including Glasshouse, Perspectives and I Am. Definitely one of my favourite sets to see and the crowd seemed to agree, with quite a few singing along (also kudos for guitarist Alex for being possibly the happiest person I’ve ever seen on a stage). We are lucky that the sound system at the venue is having a good day as we got to fully hear the extent of frontman Trenton’s vocal range.

Third on is Young Guns and if you want to see a frontman as charismatic as the king of charisma Brendon Urie, these are the band you need to see. Frontman Gustav commands the stage and the crowd almost effortlessly as they play through old and new tracks including opening with Mad World, Weight Of The World, Speaking In Tongues, Bones and closing with I Want Out. The crowd sing along throughout and even the issues with Simon’s bass at the beginning didn’t put too much of a dampener on a great set.

Finally Lower Than Atlantis take to the stage with a pretty cool light show. Opening with Had Enough the crowd are singing along from the start. At times I find it a bit harder to hear Mikey’s vocals in comparison to the previous acts but thankfully for the majority of the time, I could hear him clearly and hear what a great voice he has. I didn’t know what to expect from the band as admittedly, their records didn’t really grab me but after tonight, they definitely have a new fan! There’s a speech about the meaning behind their latest record’s title and fan favourites old and new get a play including Emily, Could Be Worse, Stays The Same and Get Over It, ending the set with Boomerang – a hint at them returning straight back to the stage for the encore finally closing with Here We Go.