Lotus Eater’s new EP ‘Social Hazard’ is a 7 track fast paced angry extravaganza of biblical proportion. The song lengths are consistently short, which works far better for this metalcore outfit, especially from the point of view of someone who doesn’t listen to the genre. And that’s not because it’s over fast. It’s because it actually makes it feel accessible rather than overpowering. After reviewing I expected to find myself in a cold sweat, but in actual fact, I was only slightly too warm. 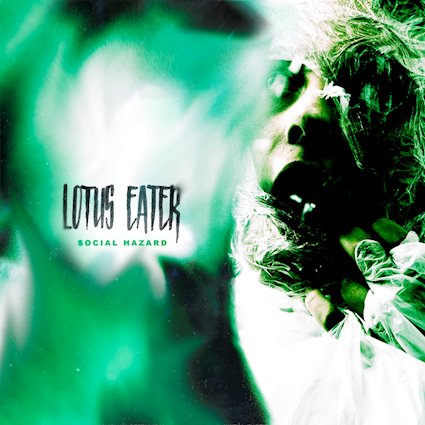 Opener ‘Thug’ is almost entirely instrumental and feels like thrash metal and metalcore had a baby, all while it’s child minder was electronic rock. It works well to start us off – especially as most introductions, specifically on EP’s, can feel pointless.

First full song ‘Yuck’ and last full song ‘Jawless’ are the most accessible of the two. In both, metalcore beginnings give way to more melodic sections, though ‘Yuck’ does lean a little into ‘There Is A Hell…’ era Bring Me The Horizon. ‘The Fear’, however, is not anywhere near as accessible. It’s heavy and angry and powerful – creating a perfect example of metalcore at its finest. ‘Mother’ is delivered in a similar vein; feeling angry and lost – all while sounding somewhat like Architects meets Suicide Season era BMTH. I personally didn’t like this track, but I’m not a devout metalcore fan. Despite this, I don’t doubt that fans of the genre will dig it deeply.

My two biggest criticisms come in the form of ‘Freak’ and ‘Words.Nothing’. The former is more generic sounding, feeling a little tired compared with the swiftly and confidently executed tracks around it. The latter is a pointless little interlude which seems to serve little purpose to the EP. They impressed me with the intro but they let themselves down with this – a six song EP would’ve worked just as well.

Overall it was enjoyable to listen to as I wasn’t completely disengaged as I initially feared I would be. I truly believe that a follower of the band and of metalcore as a whole will enjoy the EP, and perhaps even find their new favourite song. But if you aren’t into the genre already, this ain’t going to bring you in either.