Adam Elston had a listen to Koshiro’s EP ‘Crown Of Venom’. Read what he thought here… 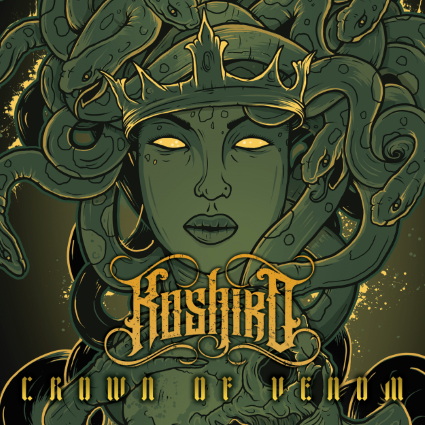 As soon as I read the bio written for this EP I noticed instantly it was recorded by Kevin Peters at Anemic Studios, who’s work I was already familiar with, considering he’d worked with my very good friends in now defunct band Our Final Hour. Considering the last thing they recorded with Peters was now 4 years ago, I was eager to hear how much Kevin’s production skills had come along since 2011, and I was not let down.

Production wise this EP sounds fantastic, but I wasn’t instantly feeling the music. Opener Green And Gold is a synth paradise, with vocalist Ben Errington crooning about losing hope. If this is the shape of things to come, I’m not yet sold. Second track King Of Snakes has a bit more going on, comes across with a very rocky sound, which is surprising from a young band nowadays. Saying that though, there wasn’t really enough substance in the song to really catch my attention. Think a watered down mix of The Devil Wears Prada and Bury Tomorrow.

Track Three, Necromancer. With a title like that, I assumed it would be something a bit more ballsy, something with a bit more punch, unfortunately I was wrong. If these guys want to be Funeral For A Friend minus the good material, so far they’re doing a good job. By the time Sleeper Cell kicks in I was expecting the same bland mix of Post Hardcore, and sadly I was right. Nothing really stands out in this track, other than quite a nice lead passage in the chorus. More synths and gang chants lead this track to an end.

Creation Theory opens with some spoken word narration, “Do Not Go Gentle Into That Good Night” by Welsh poet Dylan Thomas. When the song actually kicks in, it gives a really eery vibe, which I can’t lie, I really enjoyed, but there’s no way the drums in the intro weren’t lifted from Avenged Sevenfold’s Nightmare. Past the intro, the song kind of seems to fade into the mould of the rest of the EP.

Final track Catharsis (bar a cover of Sia’s Chandelier) took a while to get to the point, and when it finally reached a crescendo, it unfortunately just fell into place on this EP. The ballad of the release it would seem, is synth heaven, which I really hoped would clear away to let some guitars in, but some too quiet to really make out chords barely break through the electronics. After the soft section comes to an end, the guitars kick in and I honestly thought I was listening to a song about two tracks prior. The Chandelier cover is nearly as bad as the original but let’s not get into that, I feel slightly biased on that as I the original really was terrible.

Overall, if you’re a fan of generic Post Hardcore, you will really love this EP, but for me, I just felt it was lacklustre, like there was something missing. I also got the vibe that these lads had jumped on the bandwagon that a lot of bands have recently, that being the Bring Me The Horizon route. I can’t say I blame them for that though, seeing BMTH rise to the heights they have since becoming more and more electronically orientated, who isn’t going to give that a go?