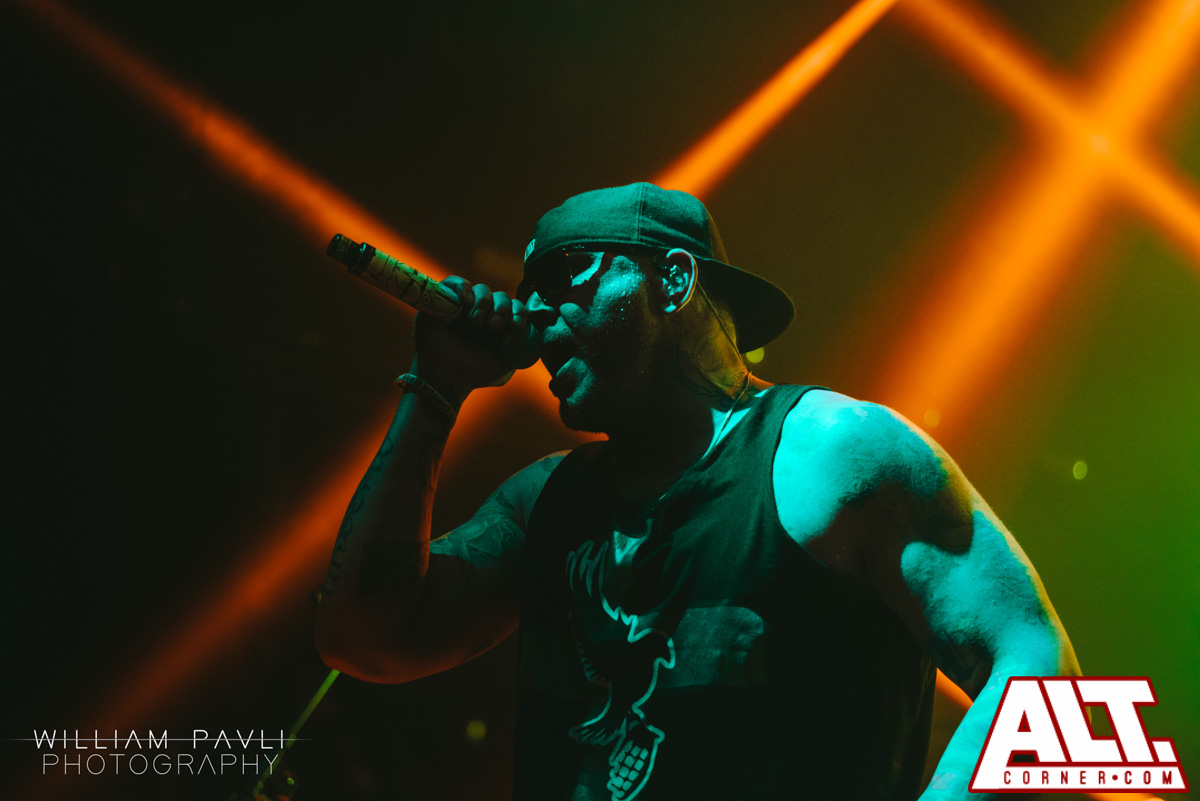 Loathe were the one and only opening act for the night and I’d not had chance to check them out, save for a group chat of metalcore fans on Instagram informing me that they’re very good (though their comments were not always in such a PG way). Another band had also sung their praises, so I had high hopes for the show. However, what I was greeted with was an assault of noise for half an hour, and I failed to really take anything from their show. The vocalist bounced around like a madman and took off more and more clothes as the set went on, so I certainly can’t criticise his abilities as a frontman. However, the band were definitely not good for someone who had never heard their music before, as it was hard to make anything out. Half way through I told my girlfriend “I feel like I’m being psychologically beaten up”, to which she glared at me, probably worried there was a super fan around me that would overhear and take personal offence. However, they did have the biggest pit of the night, and those involved in that and who had heard the band before seemed to thoroughly enjoy their set.

Basically, if you like Loathe, you’ll like Loathe live. If you don’t, you won’t. It’d have probably been faster to just say that if I’m honest.

Hollywood Undead came onto the stage just after nine to a show of sparks, getting the crowd singing along instantly with ‘Whatever It Takes‘, a fitting set opener. Danny Murillo’s non-rapped vocals were a highlight of the night, particularly on ‘Californa Dreaming‘, which introduced the fact that the band is basically a revolving machine for who’s on vocal duty and who’s on the guitars. ‘Undead‘, ‘Dead Bite‘ and ‘Comin’ In Hot‘ were obviously the ones that got the crowd singing along, and confetti punctuated the set, dropping twice from the ceiling and firing from the front of the stage during set closer ‘Day Of The Dead‘.

Hollywood Undead‘s formula is basically rapped verses and big choruses which may get tired on a record, but doesn’t get tired live. The crowd were kept hyped throughout and even seemed to pity Tom, the kid that got on stage claiming he could play guitar but then got a huge hit of stage fright the moment he got up there (based on how quickly he picked up the chords for ‘Comin’ In Hot‘, I think he legitimately could play guitar). Crowd engagement, though minimal initially, picked up during the second half of the set.

Obviously ‘Bullet‘ and ‘Everywhere I Go‘ were the songs that got the entire Academy singing in unison, the songs with the most questionable lyrics. However, though ‘Everywhere I Go‘ is just Steel Panther kind of questionable, ‘Bullet‘ makes my eyebrows raise a little. In a time when bands get “cancelled” for saying ‘whore’ in a song, I’m really not sure how these guys are still allowed to play a song with lyrics like ‘I think I’ll slit my wrist again’ and ‘I bet my mama found my letter’. I’m not offended personally, it takes a lot to offend me, but it can’t be one rule for one and another rule for another.

With that being said, I won’t even pretend I didn’t enjoy my night. They were an amazing live show, though eighty minutes is a little short for a band with five albums behind them. That being said, it was nice to have time to pick up a McDonalds before my ride home arrived.