Second Home is their debut release and it is a real punk feast as songs vary from different origins and genres. 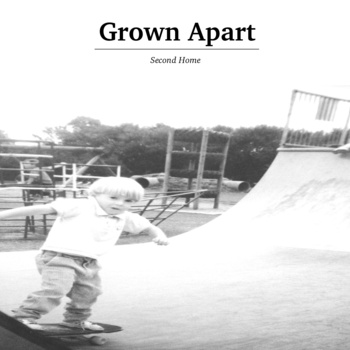 Grown Apart are a three piece from Leeds who only formed in summer 2014, after getting sick of playing music they didn’t like in bands they didn’t want to be in. In their own words “we’re too old to play cool music, too young to be in a cover band” and with this, they have created the music exactly how they want.

Second Home is their debut release and it is a real punk feast as songs vary from different origins and genres. Song’s like Rick’s Flares(which has the best intro ever, ever ever!) take on a real old school 80’s punk vibe where as songs like Brain Dead and Layabout have a real 90’s meets 00’s emo feel to them which is a compliment to their diversity. ‘Brain Dead’ especially, is a perfect example of their ability to craft and entertain various styles and really pull it off.

The reason I like this EP so much is because it is not consistent. Now, that could be a very bad thing for most bands but, for Grown Apart it is their greatest accomplishment. A lot of recent punk releases seem to drift from song to song seamlessly and the content is lost and before you know it, you are six tracks in and it just feels like you’ve listened to the same song for the past ten minutes. Which, is a criticism you cannot lodge against Second Home. I always find talking about a theme of a release to be a difficult situation as music is very much an interpretative form but with this EP, i really get the sense that it’s written about the struggle against growing up and how life just passes you by. In many ways it makes me want to put my headphones in and just run and run and run akin like Forest Gump! (even though i don’t run!)

The first track has the greatest intro I think I have ever heard but i was instantly worried that this was going to be a generic ‘Tony Hawk Pro Skater’ punk album but after the EP finished I didn’t find myself bored or anything, I just had that feeling of wanting more. I immediately started it again and strapped myself in for another way around this almighty punk meets grunge rollercoaster.