The lads in Ground Xero put a lot of work into this release, and I do think that comes through. For a first attempt, it’s very impressive, and I am very proud of them, there was just a few things that I feel they could have improved upon. 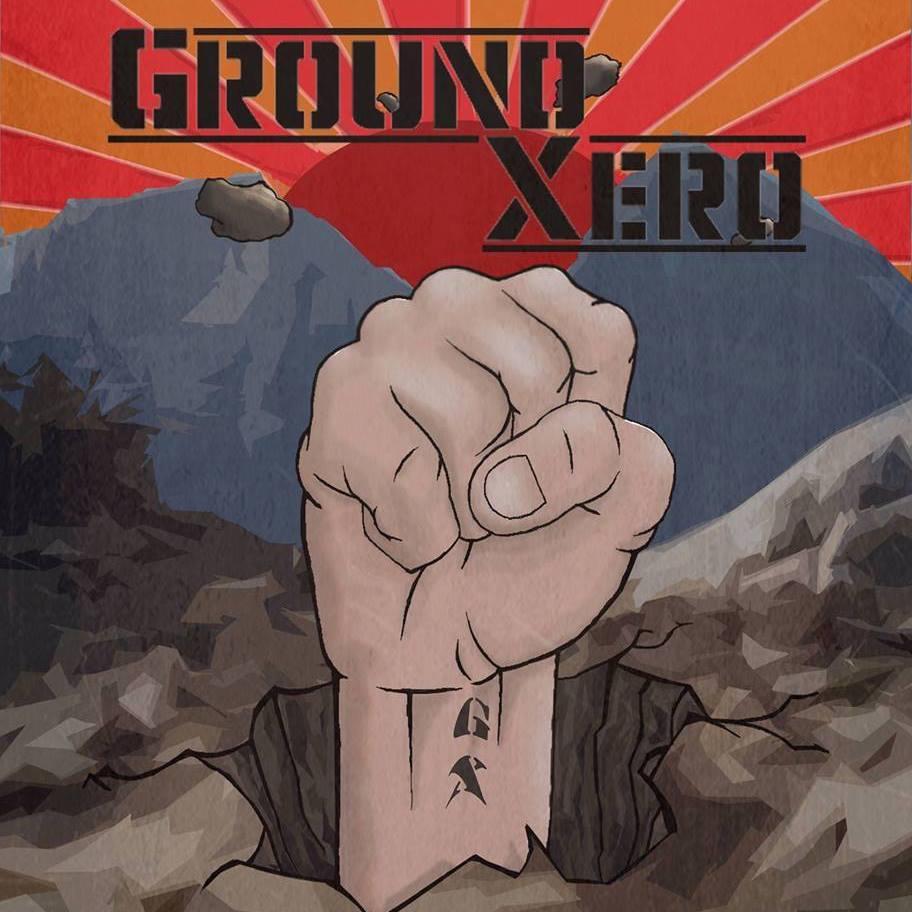 Slipping Off The Edge
A heavy, powerful riff to open the EP, a constant stream of lyrics being thrown at the listener, and everything drops out as the whole band join in to shout “as your mind begins to break”. And then? Nothing. Just back to the same riff with a drum beat. It sounds good, but I felt let down – there was so much potential here for something truly amazing. Alas, the verse sounds strong. There is an element of growling present here that sounds great; because it isn’t being overused – like in the chorus of Further Into The Cut.
The chorus sees some powerful screaming coming through, and it sounds hectic, but I think that suits the song.
There’s a little bridge here, where Ground Xero’s resident DJ gets some great sounds through. It adds a different flavour to this track, and I’m glad that they didn’t overuse this element.
As the song closes, the opening riff makes a return and the percussion sounds almost military – a very neat end to a wonderfully hectic track.

Further In The Cut
A grinding riff opening the track, and the synth lead resembling a Morse Code transmission; Further In The Cut opens powerfully, before dropping to an eery, dark verse. It all sounds great, until the chorus begins. Don’t get me wrong; the chorus is very powerful, but the growling that cuts through the music is, in my opinion, unnecessary – the chorus is strong enough without it, but if it had to remain, I feel it should have been used more sparingly and made quieter so as to not draw attention from the lyrics.
The bridge deserves special mention here; as the music dies down, vocalist Ryan Griffiths is heard whispering “just a shell of what I used to be”. This was done to very good effect, and it sounds very impressive. The song is allowed to fall quiet, before the chorus flares up once more – with the growling being overused again. A strong track, but not perfect.

Nylon
Nylon has the best introduction on the EP; of that I have no doubt. Creepy, eerie, effective. Then the hectic Ground Xero style I am now accustomed to kicks in, and the two elements work together incredibly well.
With the verse starting, I’m pleased to see the opening riff make a return in the background, but there is one instance wherein the lyrics “dream it” become thrown together, creating “dreamit”, and it sounds rushed. I fear that this could have been avoided, as it is instantly noticeable and ruins what would have been a perfect verse.
Moving to the chorus; Ryan makes up for his earlier lyrical slip-up by bashing out some incredible notes. The chorus proves to be very powerful, and is then finished with a short bridge, again led by their resident DJ, and again not overused – making me savour the beauty of that short section all the more.
The chorus section goes from strength to strength as later in the song Ryan is heard screaming some of his lyrics – it sounds powerful, it sounds angry, and it works very effectively.
As the track closes, we hear that beautiful opening riff take the lead one last time. And so ends what is, for me, the strongest entry on this release.

Ouroboros
I cannot explain this introduction. You need to hear it for yourself to understand just how crazy it is. The cymbal work sounds impressive, and the guitar sounds dirty, and they create a hectic atmosphere that makes me feel like I’m being chased by something. The lyrics are attacking, and I wonder who it is who angered Ryan so much that he immortalised them in the writings of this song. The chorus is angry, and the cymbal work from the drummer continues to be of note here, but the overall section is nothing special; it doesn’t have all that power that I was hoping for.
3 minutes of truly crazy playing; it’s impressive, energetic and angry – very angry. It ends suddenly – I want more of this, dammit. I’m glad it ended how it did, but I want this adrenaline-fuelled, hateful adventure to continue. I’m chalking this one up as my second favourite track on the EP.

Stagnant
The fifth and final entry on this impressive release. As with every song on this EP, the opening is impressive; I have come to expect this from these guys by now. Creepy guitar leads, another chip-in from the DJ, and cool drumming – then the vocals begin. The screaming sounds painful, and unnecessary. When screaming, I find it hard to sometimes understand the lyrics – unless Stagnant is actually a song about “penguin fights”? (36 seconds in. Trust me.)
The chorus is strong, and the screaming present here works better than it did in the verse.
The song then dies down as the guitar builds up, the vocals are whispered and then the drums climax into another powerful verse – this time, however, I feel the screaming is welcomed – almost necessary. With a build up like that, I expect that raw emotion to come through.
A powerful end to the EP; but still not a perfect track for me; emotion in the wrong places.

The lads in Ground Xero put a lot of work into this release, and I do think that comes through. For a first attempt, it’s very impressive, and I am very proud of them, there was just a few things that I feel they could have improved upon.
Sadly, Ground Xero recently said goodbye to their drummer Sean Elias who has chosen to work on other projects.
If you’re looking for a Nu-Metal band to join, and you live in or around Cardiff, get in touch with them at www.Facebook.com/GroundXero2