Tonight, in London is going to be interesting. Tonight is the night we witness a collective of two genres that normally wouldn’t mix, and here it is, in The Borderline in the heart of London’s West End. As we enter the venue, support act Rodney Brannigan’s a Texan living in London is already on stage […] 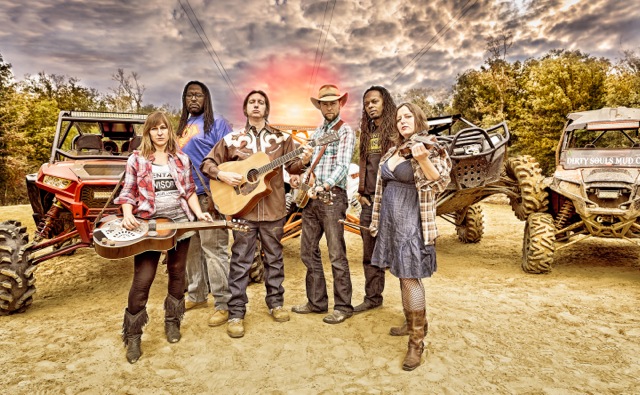 Tonight, in London is going to be interesting. Tonight is the night we witness a collective of two genres that normally wouldn’t mix, and here it is, in The Borderline in the heart of London’s West End.

As we enter the venue, support act Rodney Brannigan’s a Texan living in London is already on stage who proudly admits he’s paying our cray taxes. He’s coming to the end of his set, get this. One guitar rests on top of another, where he plays as one. Not one guitar with two heads, but in fact two guitars on top of one and another, that is crazy talk, I hear you say. It’s not, it is happening and Brannigan is enjoying every minute of it on this stage. A stage that’s been home to many iconic bands and musicians in the past.

A bit of history here, The Borderline is the first-place rock legends, Pearl Jam played when they came to these London shores.

Anyway, after a few minutes the main band who we’re all here to see, whose tagline reads, Banjos and rappers shouldn’t sound this good together. But they do. Gangstagrass enter the stage.

Rench the main man behind the gang, whose idea formed a new genre mixed with the ideal sound for a TV show such as Justified. Melody Berger the fiddle player is exceptional, her vocals literally sent shivers down my spine, her voice is so strong while holding a fiddle firmly planted to the side of her neck, is from another world.

The crowd is a mixture of ages, some with the country and western collar, some with their trousers sagging. They all sing the same words in a different aspect their mind.

A favourite film of mine is Oh Brother Where Art thou….with the Soggy bottom boys performing their trustworthy melodies. As it goes a little quiet…out comes “I am a man of constant sorrow” this here is Gangstagrass showing their own vibe to a classic. Rapper R-Son the voice of Reason flows in amongst the fiddle play and shows his lyrical skills adapt to a classic track.

Gangstagrass with Rench at the helm get into their stride. I see R-Son wander to the back of the venue with the mic in hand to take a well-earned rest. While occasionally making the odd sound in the mic. People don’t see him, but I have eyes like a hawk. During this chill time a fan comes out from the toilet wearing his new Gangstagrass T-Shirt. It’s already been signed by another band member; The T shirt wearer now has R-Son’s John Hancock upon it.

The Borderline just held host to some wonderful bluegrass hip hop, I’ve not witnessed it before which is what music is about.

This is their last gig in the UK. As they now venture to the Netherlands

Melody Berger in her polka dot dress has just blown the steam out of the venue and my mind. Her voice is from another planet. Rench has got himself a great collective of powerful musicians who can play and boy, they can play.