Frank Carter & The Rattlesnakes hit Clwb Ifor Bach in Cardiff for the last night of their sold-out UK run. The show was upgraded to the bigger room due to demand which was one of the quickest dates to sell-out on the tour. 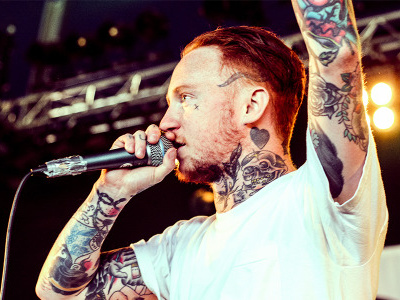 Frank Carter & The Rattlesnakes hit Clwb Ifor Bach in Cardiff for the last night of their sold-out UK run. The show was upgraded to the bigger room due to demand which was one of the quickest dates to sell-out on the tour.

Up first was Creeper, the Southampton goth-punks recently released new EP The Callous Heart and put on a show worthy of a headline slot. Opening with one of their most popular singles VCR, the quintet showed no signs of the strains of tour with a vibrant and energetic set. Recent release The Honeymoon Suite followed before the band played new track Allergies and brought back their crowd pleasing AFI cover of Sacrifice Theory before closing with former opening track We Had A Pact.

The entire set was a sing-a-long and props to vocalist Will Gould for keeping his leather jacket on for the duration of the set, even with the heat in the venue and the amount of jumping around. Yet another superb performance from the quintet and they have again proven why they are becoming one of the underground scene’s fastest rising bands.

Up next were Black Hole. The band were without bassist Max Hart who had been taken ill the previous night (thoughts go out to Max for a speedy recovery). This led to a shortened set but it was obvious a good time was going to be had, the moment the hardcore/punk band took to the stage (or floor in vocalist Richard Carter’s case). This was the first time I had heard of the band and they definitely didn’t disappoint! As they were a bassist and backing vocalist down, the microphone was placed in the middle of the circle for fans to join in during Don’t Cry. Richard’s dance moves were entertaining alongside some great vocals and guitarists Nick Mitchell and Andreas Yiasoumi and drummer Jack Kenny have serious talent!

Up next was the headline act Frank Carter & The Rattlesnakes. Frank began the show by thanking everyone for coming and making it a sell-out tour and saying “my stage is your stage” before diving into the crowd. His set was spent climbing around the rafters or jumping into the crowd like a crazed monkey, providing an exciting element, until the set was stopped for him to threaten to “smash your face in” to some one in the crowd before going on a 5 minute long rant about said person, something I personally think is not needed in a set. His hoarse vocals during the more ballad sections of the set provided a different outlook to the chaotic running that is usually expected, at one point the crowd was even told to sit down during the track before normal service was resumed with a giant circle pit.