“Having seen these guys four times last year, they always seem to be on the edge when headlining a show (or stage) compared to when they don’t. But, tonight none of that was present and they really blew me away”. 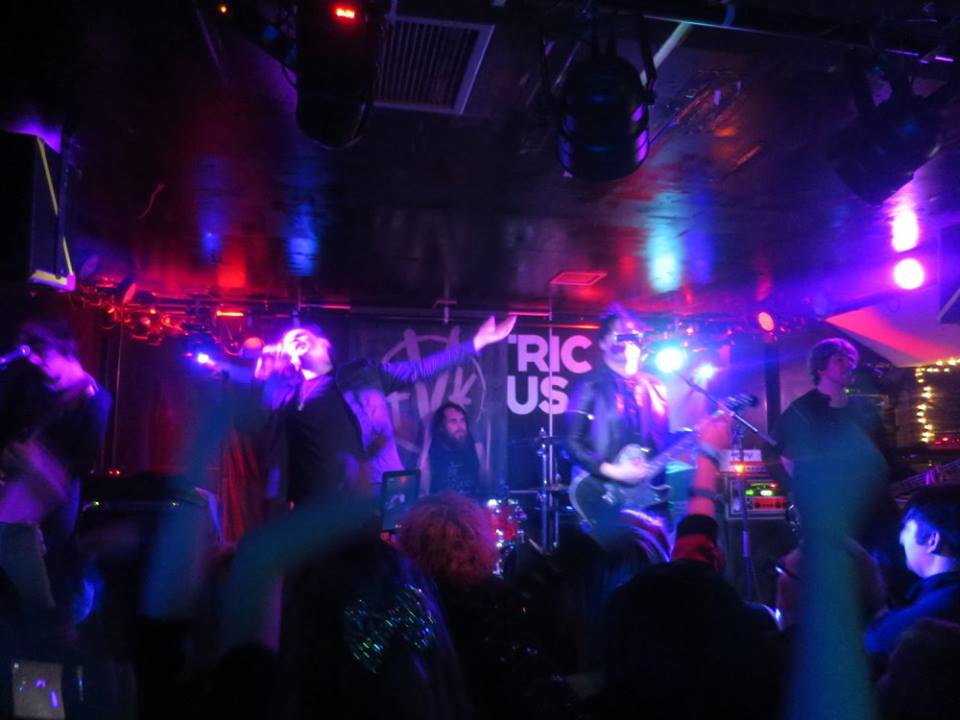 cTo start this night out Hanana took to the stage and brought heavy guitar at fast paces. They had a great, at times almost rock and roll sound that really was a pleasant change from my last few gigs. The vocals were not the most inspiring I have ever heard but, still very good. For a rock band, the drums at times seem to have the timing of a Brit-Pop band. The set did seem regrettably a bit rushed but, this could be down to the fast pace of their songs (or the fact their set time was cut).
(7/10)

The next band to the stage was Miss Vincent and one I was looking forward to, being that the last time I saw them was in 2013 (I think!).  WOW! They have definitely upped their game since then.  With them taking to the stage with ‘Imperial March’ as a backing track I could feel the hairs on the back of my neck stand on end (sorry I am a gig-nerd at heart). And when they started they won the crowd over within the first few chords and from then on they had the crowd jumping and clapping along with every song. With Alex’s haunting vocal style he just looks, sounds and feels like he was born to be a front man. The way he commands the crowd throughout their set is really a sight to behold. The ended on ‘Can’t spell blame without ME‘ which you can’t help but feel that even with their self deprecation lyrics these guys are going places.
(9/10)

Next up were Glasgow based Vukovi. Again I am glad to see these guys play and its good that they are not another Scottish band with an American sounding vocalist (that isn’t from the US). Their sound is heavy but not to the point where it feels oppressive and with the great contrast of the light vocals which makes you feel like you are walking in thin air. With the high energy songs like ‘Boy George‘ getting the crowd all off their feet and involved which when being contrasted with their track ‘Bouncy Castle’, a more arms in the air dance-y number, a result of showcasing this band has a lot to offer live. Jenine is a true front woman, working the stage the crowd and whipping everyone into a frenzy and even taking peoples phones from the crowd and recording videos for them. I am sure if she had asked everyone there to storm Edinburgh Castle they would have. Superb.
(9/10)

Fearless Vampire Killers were up as they took to the stage for their headline slot. Having seen these guys four times last year, they always seem to be on the edge when headlining a show (or stage) compared to when they don’t. But, tonight none of that was present and they really blew me away. With the lead vocal for songs being shared between Kier and Laurence (swapping the bass guitar over between them) it gives you the impression at times that this is two bands and not one (great value for money!). They posses this infectious pop beat that makes you take notice but, there is this experimental feel to their sound I really, really enjoy. Dark and deep meaningful lyrics, rock guitars and an on-stage pop-punk energy makes it clear to see they are there to have fun and make sure every member of the crowd has fun too. With the addition of ‘Regret‘ to the set list, that will haunt you for days afterwards and with ‘All Hallows Eve‘ still ringing in my ears. Unfortunately though, there was a strict curfew in place, so they had to promptly dispense with the encore and kick straight  into ‘Maeby‘ with everyone shouting every word back at them.
(9/10)