In a month were festivals suffered on a large scale, we don’t need to point fingers, Fat Lip Festival took over 2 venues in Bristol for its inaugural year & did so in the loudest way it knew possible. Entering the tiny venue of The Lanes as As Flames Rise began their set, it very […] 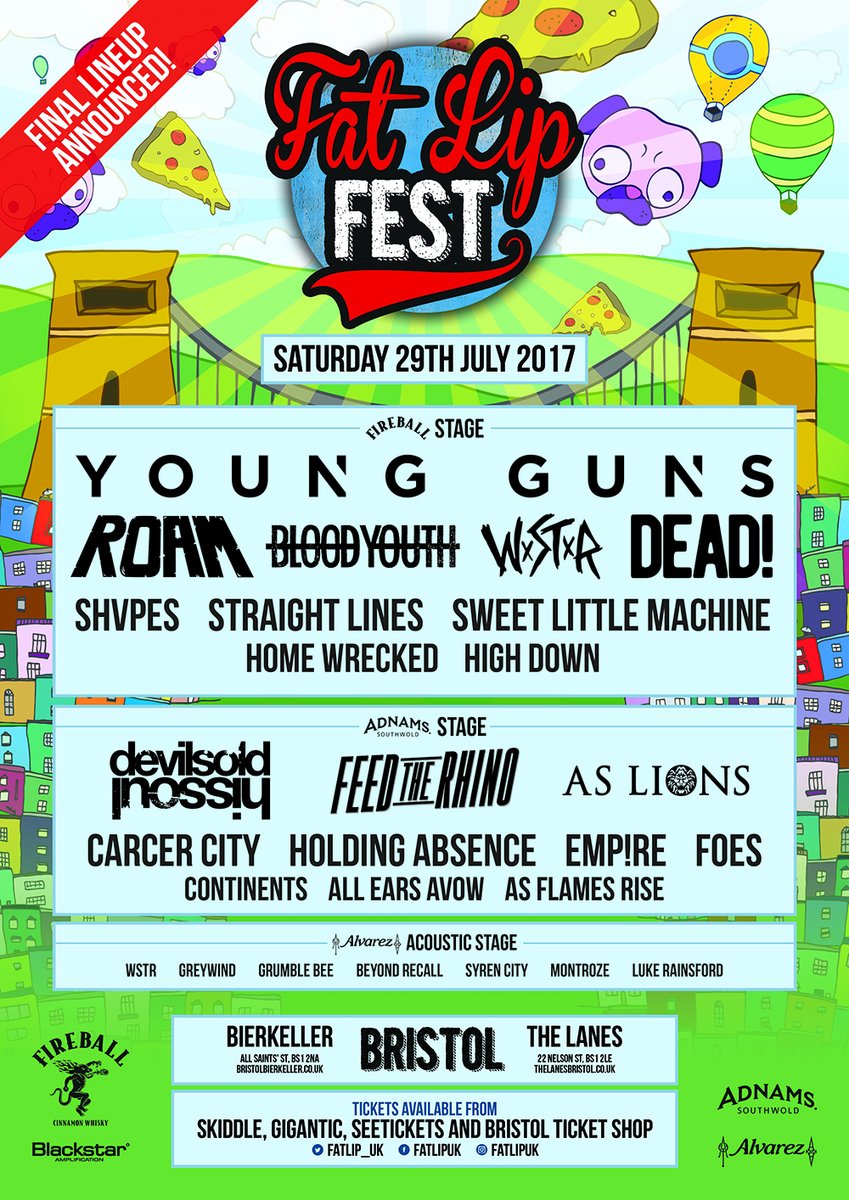 In a month were festivals suffered on a large scale, we don’t need to point fingers, Fat Lip Festival took over 2 venues in Bristol for its inaugural year & did so in the loudest way it knew possible.

Entering the tiny venue of The Lanes as As Flames Rise began their set, it very quickly became obvious that this wasn’t going to be a day for giving your ears a break. For a band that was kicking off the day’s events it was really nice to see a sizeable crowd filling the venue, one which stuck around for local band All Ears Avow.

One of the best things about Fat Lip Festival was that it provided a platform for bands that are creeping into the radar of people’s attentions. For both As Flames Rise and All Ears Avow, who put on strong performances, there were members of the audience really getting stuck in and singing along whilst there were also likely members of the audience experiencing them for the first time. The festival had a real music lovers feel to it.

Every festival has that band that you hear for the first time & they join the running for your new favourite. At Fat Lip it was Sweet Little Machine that won that award. Whilst their set in Bristol’s Bierkeller didn’t have the largest of crowds, the band were full of energy, with lead singer Alex making a short trip into the audience, & they clearly couldn’t be more excited to be on the stage. With a real throwback pop punk feel there’s something quite nostalgic about them; maybe something we all need in today’s world.

Having Straight Lines back on the festival circuit is a real delight, especially as they’re still sounding as strong as ever. The Welsh rockers have been appearing across the country over the summer and from the excited audience reaction they are repeatedly getting, everyone is pretty damn happy to see them again. Unsurprisingly it’s fan favourites, such as Half Gone, that get the biggest cheer of excitement as the opening riffs begin. They’re the perfect band for a summer’s day, all be it a rainy one.

Dead! are a band that are starting to gain the recognition they really deserve. There a few bands that perform with the sheer energy & intensity that Dead! do & watching them live is an experience in itself. Every word that is sang feels a little raw and incredibly passionate and matched with the energy provided by the guitar & drums, it creates something very special. The slightly dark & dingy vibe of the Bierkeller was perfect for this & created a great atmosphere for the band.

Grumble Bee never disappoints, especially in his acoustic sets. Despite the rain pouring down the fans gathered & thanks to some quick thinking a handy Fireball gazebo was quickly built to provide shelter. Grumble Bee aka Jack even invited some fans on stage out of the rain & they soon doubled as guitar holders & his own personal choir. Every time he performs it is with the upmost of emotion & feeling. We love him; there is little else to say.

On the heavier end of the festival line up, both Blood Youth & Devil Sold His Soul led the way with big, loud, in your face performances. For both the crowds could not have been more involved with mosh pits galore, even in the tiny venue of The Lanes! It really seemed that this heavier end of the scale is what people had come here for & if the festival have taken note there’s a chance of more bands like this being added to the line-up if the event returns.

Feed The Rhino are one of those bands that you go to see in the hope that carnage ensues & their performance at Fat Lip was no different. There was standing on the bar, a crowd dive, a piggy back through the crowd, a wall of death; need we go on? Every time Feed The Rhino perform, no matter what the crowd size or thoughts on them it is with so much energy & like this is what they were born to do. Thankfully the crowd were waiting in anticipation for the band and from the get go, quite literally, jumped at the chance to get stuck into their performance. If you do one thing in your life it has to be seeing Feed The Rhino live.

Given the slightly heavier nature of a number of the acts on the line up, on paper Young Guns seemed a little bit of a strange choice to headline the day; however the crowd that had gathered to watch the band clearly proved otherwise. Young Guns are a band for all. They’re non-offensive, have a catchy singalong catalogue of music & musically aren’t too heavy or too quiet. With fans singing back every word and excited faces filling the venue, the band rounded off the festival with a solid performance.

Fat Lip festival really has the potential to grow in to something really good. With non-stop music across 3 stages, one being a purely acoustic stage, festival goers were treated to some of the most exciting new and established bands in rock. The intimate venues provide a great setting for a rock show & give people the chance to get up close & personal with music. We hope year 2 is on the cards!