Eva Plays Dead came to Glasgow’s Broadcast for the last stop for the ‘Sound of The Written Word’ EP launch tour. Here is what Gareth Rooke thought of the evening. 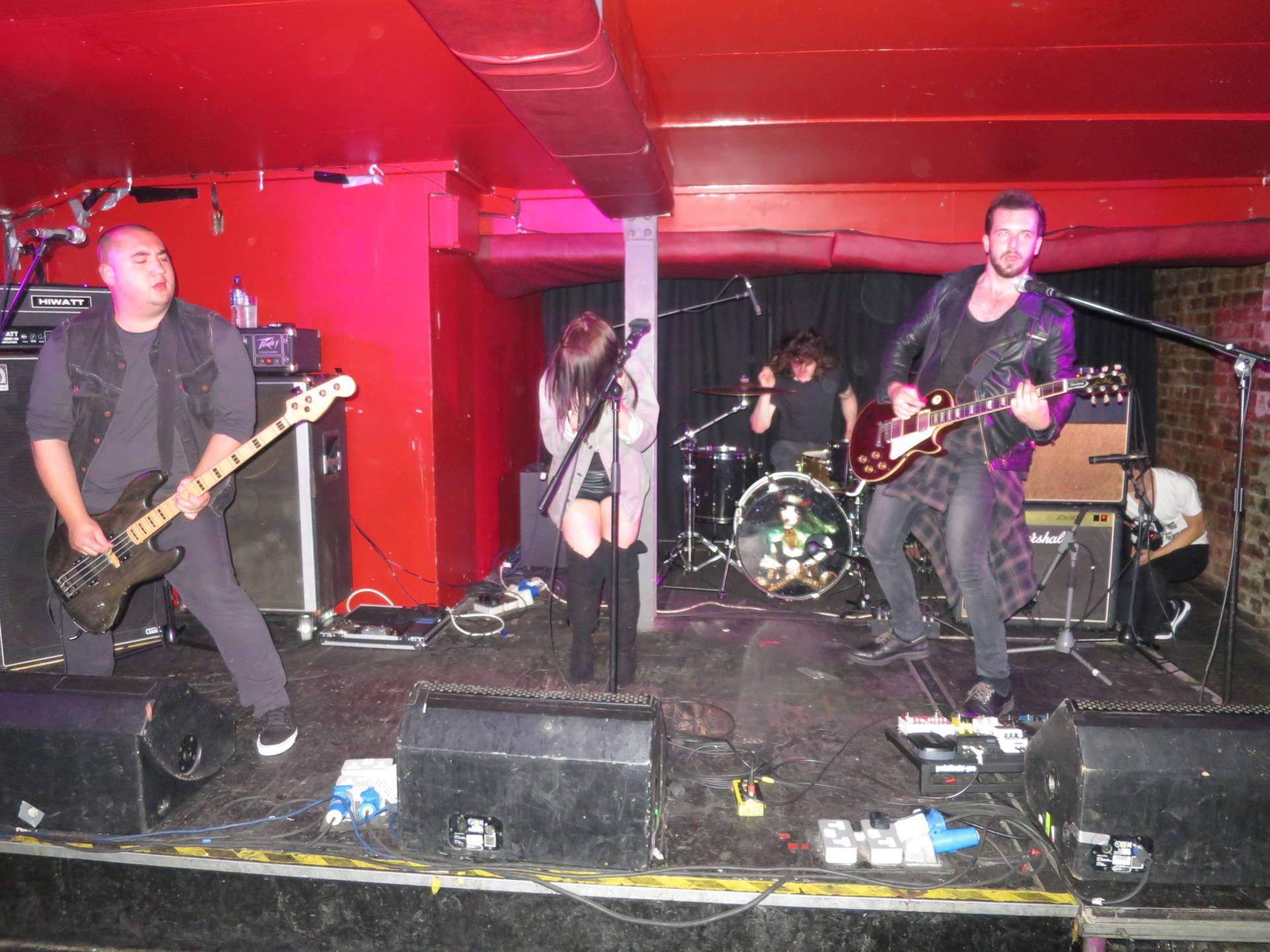 Eva Plays Dead came to Glasgow’s Broadcast for the last stop for the ‘Sound of The Written Word‘ EP launch tour. The venue was downstairs and had padding on the steel cross braces so you wouldn’t bang your head. The place has a good feel to it and good sound.

First up was In Search Of Sanity, who are an old school rock n’ roll band. With covers of Blue Suede Shoes and Knocking On Heavens Door just reinforcing this feeling. Their own songs have that same vibe to them. You could feel the influences from AC/DC, Kiss, The Rolling Stones, Eagles and even Status Quo. I tried not to like them, but couldn’t help but smile during their set and I even laughed at their banter between songs. They won me over, well done guys. They do look a bit miss-matched in the way they dress; the lead singer was wearing a flat cap looking like he was from AC/DC, the guitarist looking like he belonged playing with Jimmy Hendrix, the bassist was dressed like early blink-182 or any pop-punk band from the late 90’s and the drummer wore a suit and waist coat that totally meant he could have been from a funk or blues band.

Life on Standby are a female fronted rock outfit. They have some really super catchy guitar rifts but the key to this band is the vocals…Erin can really sing and I mean sing. She can serenade you or she can take her voice to a deep gritty sound without having to scream (yet to see any other vocalist do this live). Last time I saw these guys live I criticized them for the lack of movement  as most female fronted bands feature a singer that commands the stage and almost never stay still. I now know why she doesn’t run across the stage. It’s not to do with the guitars either side caging her in. It is in fact that she is caged in by her own awesome voice. If she was to run around like Taylor Jardine (We Are The In Crowd) I think it would take away the effect her vocals has on you. As they recommended go and listen to there song Shadows on YouTube.

Eva Plays Dead are one of my favourite rock bands to see live and they didn’t disappoint me tonight. Tiggy, the vocalist blasted on to the stage like Jessica Rabbit captivating your attention and hypnotizing the crowdwith her vocals like a siren that always end up putting you into a trance. They don’t hold back as a live band, they assault you with ever single beat of  Zach’s bass and then they smack you around the face and drown you in sound-delirium. After hearing Easy to Hate live this is my new favourite song of theirs, especially the way this song was dedicated to Tiggy’s ex boyfriend. They really do love the crowd and really take time to involve you from the moment you walk in through the door, whether this be Matt making his way around the venue talking to everyone or whether it’s Tiggy calling me out on how I know heels can kill your feet when standing in them all a day (not sure where she got this idea from…honest!). The resulting action of her speech lead to her taking her boots off in the middle of the set. They ended their performance with Seb bring his drums into the crowd where he then played facing Zach and Matt, making you feel that they are the crowd not you.