Creeper surpassed their sky high expectations with a sensational show on the London stop of their Theatre of Fear tour. Supported by Nervus, Microwave and Can’t Swim, Creeper headlined what is sure to be considered one of the highlights of 2017, for all of the close to 2000 capacity crowd. Opening the night were Nervus. […] 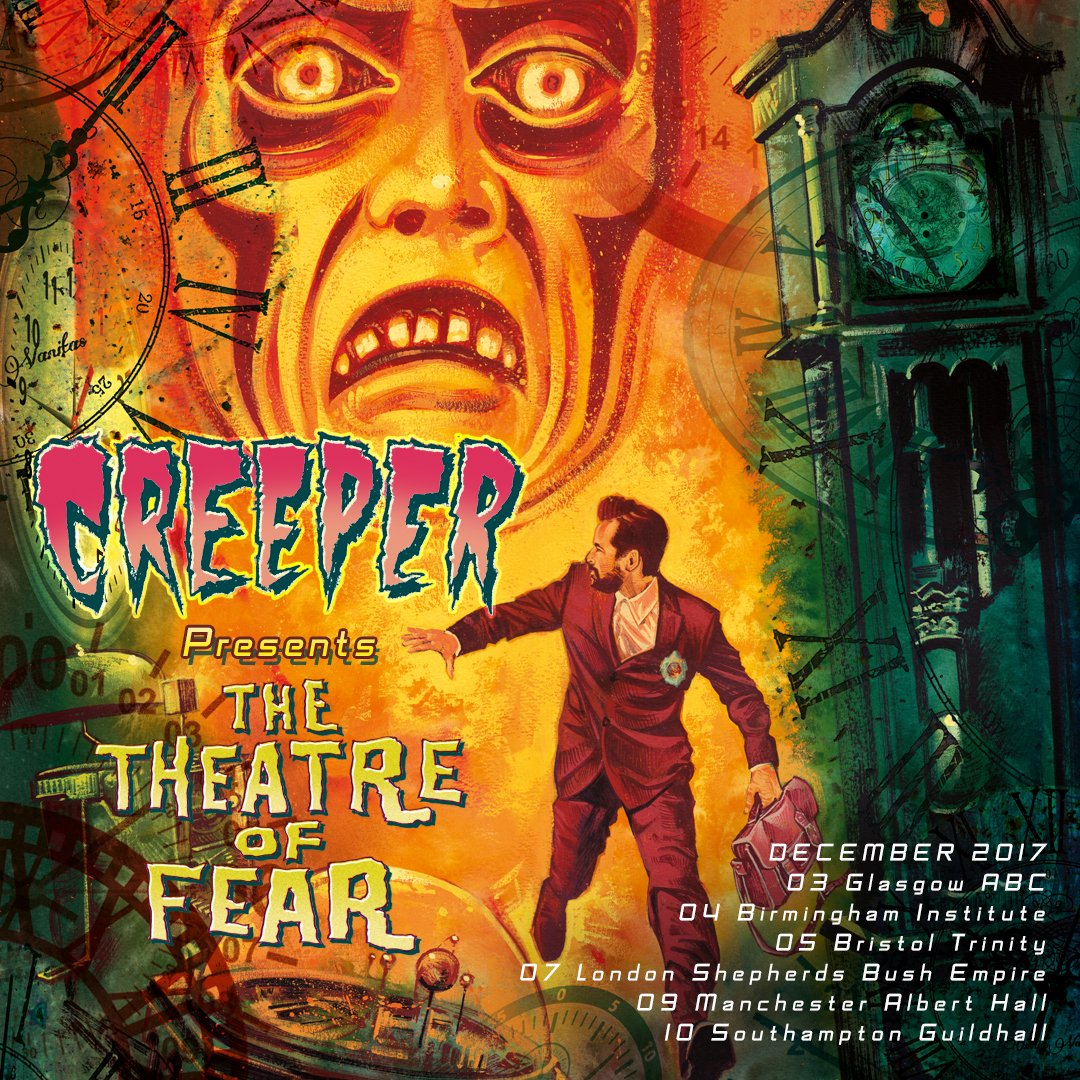 Creeper surpassed their sky high expectations with a sensational show on the London stop of their Theatre of Fear tour. Supported by Nervus, Microwave and Can’t Swim, Creeper headlined what is sure to be considered one of the highlights of 2017, for all of the close to 2000 capacity crowd.

Opening the night were Nervus. Playing just after doors opened can be difficult, particularly for an underground band on a larger stage. Nervus however looked right at home. Playing songs off of 2016’s Joy as well as new song Sick Sad World, which sounded perfect for rooms this size. As an opener, they managed to maintain the special event feel of tonight. Their joyous stage performance, notably the infectious dancing of keyboardist Paul Etienne and the appearance of Lucinda from Kamikaze Girls made this an opener to remember.

Next up were college emo rockers Microwave. Their relaxed sound easily filled Shepherds Bush, and for a few in the crowd a chord was clearly struck. Their soft rock was calming and intimate, and instead of filling the venue with their sound they shrunk it, with precision. Drawing in the attention of each member of the audience. Microwave made it feel as if you were holding your breath until a big crescendo of the final two songs which closed the set with an explosion of raw emotion.

The final support band were New Jersey band Can’t Swim. Playing the majority of songs from their sensational Fail You Again. Having toured in venues a tenth the size of Shepherds Bush merely a year ago, you wouldn’t blame Can’t Swim for being daunted. They were far from daunted and took to the stage like headliners. Playing with a freedom that can only come when you have songs as good as those off of Fail You Again.

While frontman Chris LoPorto may not be the king of stage patter, the ability to transition between songs was captivating. Using an instrumental, jam style version of Pure Imagination as an introduction for All the Moves You Make Are in the Dark, allowed their support set to flow seamlessly from hit song to hit song. The obvious standout was Stranger a song which proves that Can’t Swim are more than capable of making stages like Shepherds Bush their Home.

To say Creeper appeared at home tonight is huge understatement. If anything they seemed restricted by the venues size. For each venue size that Creeper has realized during their short time as a band, their stage show, their stage presence and the sheer expansiveness of their live performance has improved. It’s remarkable that whether it be in front of 50 people or 2000 Creeper have never needed to sing their own songs. They have managed to create a collection of songs that mean so much to everyone in the room tonight. From screaming “You wanna know why it rains?” to singing the chorus to Misery, every individual in Shepherds Bush tonight sang every word like their life depended on it.

Creeper have created a live show that is far beyond that of a band whose debut album isn’t even 9 months old yet. Whether it be the use of characters from their mysterious James Scythe mystery to introduce tonight’s show, or the use of a country song in the middle of a punk show. Creeper’s experiments push the boundaries of what is expected of new bands.

Ever since Creeper came to the forefront in the media, it has always been what next. What can Creeper do to better this? And time after time they better it, they defy the greatest of expectations. They set the bar higher every time they perform live. Tonight was no exception. Personally I never thought I’d see a better Creeper show than their Underworld performance, then they bettered that during the spring tour this year. So for tonight to have been the best Creeper show I’ve seen, it speaks volumes of the band they have become and the band they could be. If this sort of form continues then the sky is the limit for Creeper and everyone should be excited for what is to come.