CKY bought late 90s early 00s nostalgia to the Wedgewood Rooms in Portsmouth on Wednesday night. The trio showcased their vast touring experience with a very accomplished set to a devoted crowd. Opening for CKY tonight were the Graveyard Johnnys. Also a three piece, Graveyard Johnnys are somewhat unique in that instead of a normal […] 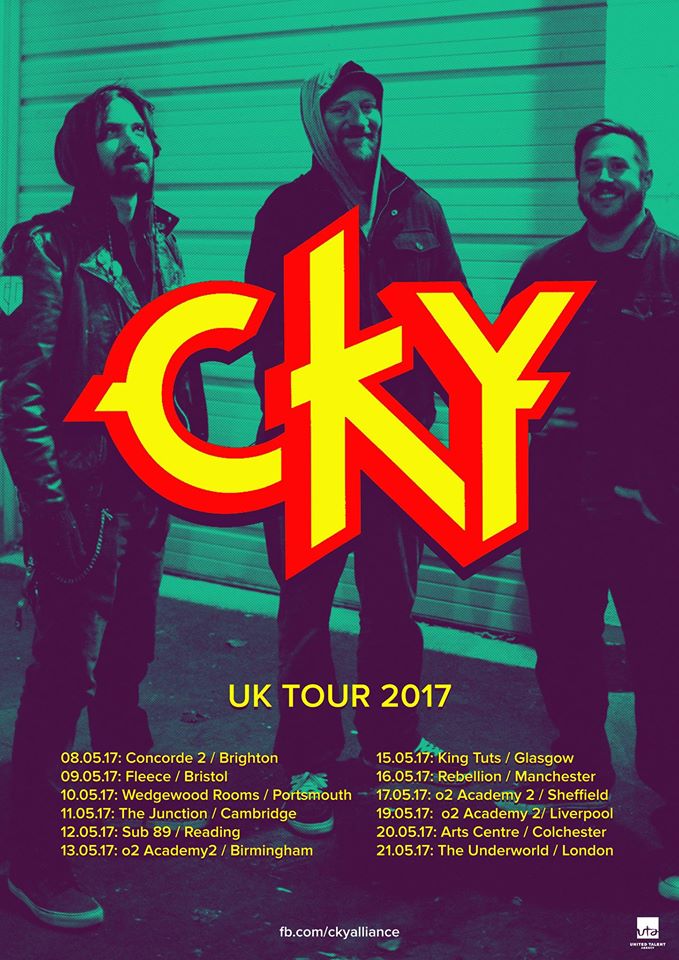 CKY bought late 90s early 00s nostalgia to the Wedgewood Rooms in Portsmouth on Wednesday night. The trio showcased their vast touring experience with a very accomplished set to a devoted crowd.

Opening for CKY tonight were the Graveyard Johnnys. Also a three piece, Graveyard Johnnys are somewhat unique in that instead of a normal bass guitar the lead vocalist uses a double bass instead. Whilst this added to the unique and jovial image of the band, they weren’t anything too special. They weren’t terrible but when trying to warm up a crowd who are solely there to see the headline act it takes a lot to truly shine through, and the Graveyard Johnny’s didn’t have that. Even a cover of Golden Earing’s Radar Love to close the set wasn’t enough to standout to a reasonably full Wedgewood Rooms.

CKY are one of those bands who have gained a devout following. This was notable as even before they took the stage the crowd were chanting their name. As brother of drummer Jess and of Jackass fame Bam Margera introduced the band to a rapturous response, the band opened with The Human Drive in Hi-Fi into Sporadic Movement. You could instantly tell the experience of the band. The pauses between each song to allow the chorus of “CKY” to gather momentum again. The crowd were well up for tonight with constant dancing, singing and moshing throughout. This was more or less a greatest hits set from CKY and the crowd did not mind. With songs like Rio Bravo and Flesh Into Gear whipping the crowd into a frenzy. The one new song played Days of Self Destruction went down brilliantly and slid straight into their setlist.

The relaxed stage patter between Chad and Jess oozed experience and really showcased why this band are so loved. Ending their main set with arguably their two biggest songs 96 Quite Bitter Beings and Escape From Hellview the crowd went ballistic singing not only every word but every riff, solo and drum beat. With the crowd being so insistent on chanting “CKY” between each song, you wouldn’t have blamed the trio from milking the chant for an encore. But being the professionals they are they came straight back on stage, this time accompanied by Bam. However instead of introducing the band this time he performed. Rattling through a cover of GG Allin’s Bite It, You Scum. Whilst many of the crowd didn’t know the song they still went mad for both the band and the guest vocals of Bam Margera. Closing with Knee Deep, CKY left the stage triumphant. With the crowd chanting their name, they bid farewell to a night in which they had more than proved why they have such a devout following.