Busted with support from The XCERTS and Young Brando @ Motorpoint Arena, Cardiff

Seventeen years on from their inception, Busted are still going strong as they head to Cardiff on the mid-point of the Half Way There tour! Support comes from The XCERTS and Young Brando. There is a mix to the crowd as we wait for doors to open, with teeny-boppers covered in glitter and young adults and mothers reminiscing about the good old days of when Busted first came about. 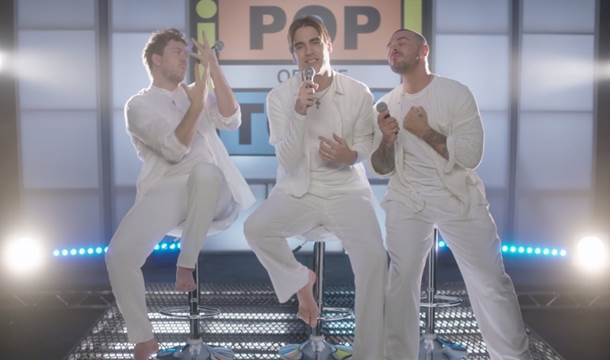 Opening the show are Young Brando, the Salisbury quartet who were energetic in their opening as the frontman screams “Cardiiiiiffffff” but their stage presence doesn’t keep this up. The set is full of good drum fills. Lighting Up The City has a good guitar intro and line running through. Young Brando show promise but did not grab my attention as much as I hoped they would, all attention from myself was lost by the time they got to Lions Den. The crowd enjoyed them though as their album plug (out Friday) was met with cheers. My attention was regained as the smooth melodies of catchy ballad Encore (described as about having sex with your ex and that’s why it is only 3 minutes long) shows off the frontman’s vocal abilities better than the rest of the set. If there was a sentence to describe Young Brando it would be if The XCERTS had a baby that was pushed too far too soon.

Speaking of The XCERTS, the Scottish sweethearts are up next after a very short break (seriously, it was like 5 minutes!) The trio kick off with Daydream and from the get-go, provide more energy than their predecessors. There is a rare moment as Show Me Beautiful kicks in with lead vocalist Murray Macleod going into full frontman mode, handing his guitar off to his tech and prancing around the stage like a new but less flamboyant, reincarnation of Freddie Mercury. There is minimal crowd interaction, but it is not needed as The XCERTS’ music speaks for itself. The trio announce that this is a much better show than the last time they played the venue which in their words was “a car crash”. Two of the band’s most revered hits Hold On To Your Heart and the anthemic, arena ready Feels Like Falling In Love close off the set and I’m sure a lot of the crowd would be falling in love if they already didn’t know The XCERTS. Yet again The XCERTS show why they are one of the UK’s most exciting alt-rock artists.

Thirty minutes after The XCERTS, A countdown appears on the big screens, counting from 2019 to 1990 as silhouettes are broadcast on the curtain and Busted’s poppy recent single Nineties kicks in, a fitting start as the track is a throwback to the nineties and the show will be a throwback to many of the trio’s fans. As soon as the curtain drops, James, Matt and Charlie run into view and are full of energy. This energy continues into Air Hostess, however as this is one of the most popular songs, James hands the mic over to the crowd who respond by belting out every lyric. While the new songs including Reunion, Radio and Shipwrecked in Atlantis are received well by the crowd, the older tunes from Busted’s first two albums go down the best as the likes of Crashed The Wedding, 3AM, What I Go To School For and Thunderbirds Are Go are met with joyous sing-a-longs and old fan favourites that are rarely played live like Britney are given an outing. The trio have a day off tomorrow, so they warn fans that Charlie is going to be on one, who responds by asking who wants to party with him. Unsurprisingly the whole crowd responded. Covers are also included in the 20-song set as a version of Tom Petty’s Free Fallin’ and Son Of Dork’s What Happened To Your Band? are worked into the set.

Even after 17 years, Busted’s original pieces are still as popular as ever and their energy is still as fruitful as if they were on year one of touring. The trio may be older and wiser, but they regain the same youthful exuberance that they had back in 2002. Throughout the set there are smiles from the band, who looked like they were truly enjoying themselves.