Bowling For Soup, The Aquabats and Army Of Freshmen live in Cardiff!

Opening up the Get Happy Tour 2018 are Army Of Freshmen. Admittedly a band that I have never heard of previously and I’m ashamed of this fact especially given that they are kicking off their 20 year celebration on this tour. Their tracks are catchy and they really got the crowd going. The entire set is […] 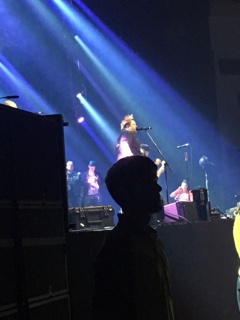 Opening up the Get Happy Tour 2018 are Army Of Freshmen. Admittedly a band that I have never heard of previously and I’m ashamed of this fact especially given that they are kicking off their 20 year celebration on this tour. Their tracks are catchy and they really got the crowd going. The entire set is energetic and the frontman is a bundle of energy, constantly running around the stage and at one point being wheeled around the photo pit on a box. It was a shame to see their set end even if they did end with what is now one of my new favourite songs in Juliet.

Up next is The Aquabats and to be honest, I did not get it at all. It was clear that a lot of the crowd loved them but I didn’t find the appeal in seeing grown men run around the stage in superhero gear. Musically, they put on a good performance but I just couldn’t get into it lyrically as I was reminded of Mermaid Man and Barnacle Boy from SpongeBob Squarepants. To their credit, it was good fun seeing the crowd passing inflatable sharks, pizza slices and balls, although getting two kids on stage to then crowdsurf on the aforementioned inflatable pizza slices was definitely a health and safety accident waiting to happen (luckily no-one was hurt).

Bowling For Soup take to the stage to chants of their name and the Here Comes Bowling For Soup video with the crowd going nuts. Usually bands leave their most well-known songs until the end of the sets, but we are treated to Girl All The Bad Guys Want very early into the set, sending the crowd into a frenzy. It’s a laugh a minute in the breaks between songs with very random chatter that would give former tourmates Steel Panther a run for their money. Jaret sums the early chatter up with a gem of a quote; “The entire first bit of the set they talked about fingering girls in the 8th grade and taking blue shits”. The entirety of Drunk Enough To Dance was played, so we also got Emily pretty early on. The set list isn’t just albums from Drunk… though as after a bit of a debate (where the yes people in the crowd apparently won 32 to 4, though we think it was a bit of a bigger gap) we are treated to the infamous Phineas & Ferb theme Today Is Gonna Be A Great Day, things get slowed down at one point with a rendition of Where To Begin. Again the witty remarks stand out with the quip of “I’m gonna think of something Eric doesn’t like…. who likes to stick porcupines up their ass?” (no us neither…) and also trying to find Eric somewhere to live in Cardiff. The customary appearance of High School Never Ends sees a huge sing-a-long and there is also the appearance of a 1985 countdown timer (though sadly I had to leave before the track due to transport).

In all, it was a great first arena headline show for a band who have plenty more left in the tank. Roll on the next show!