Tonight saw Asking Alexandria and Black Veil Brides– with excellent support from German sextet To the Rats and Wolves – descend on Manchester. Outside the Academy 1 venue, fans queue eagerly for hours – a fair few sporting black face paint in homage to BVB. Whilst the need for increased security is understandable and necessary, […] 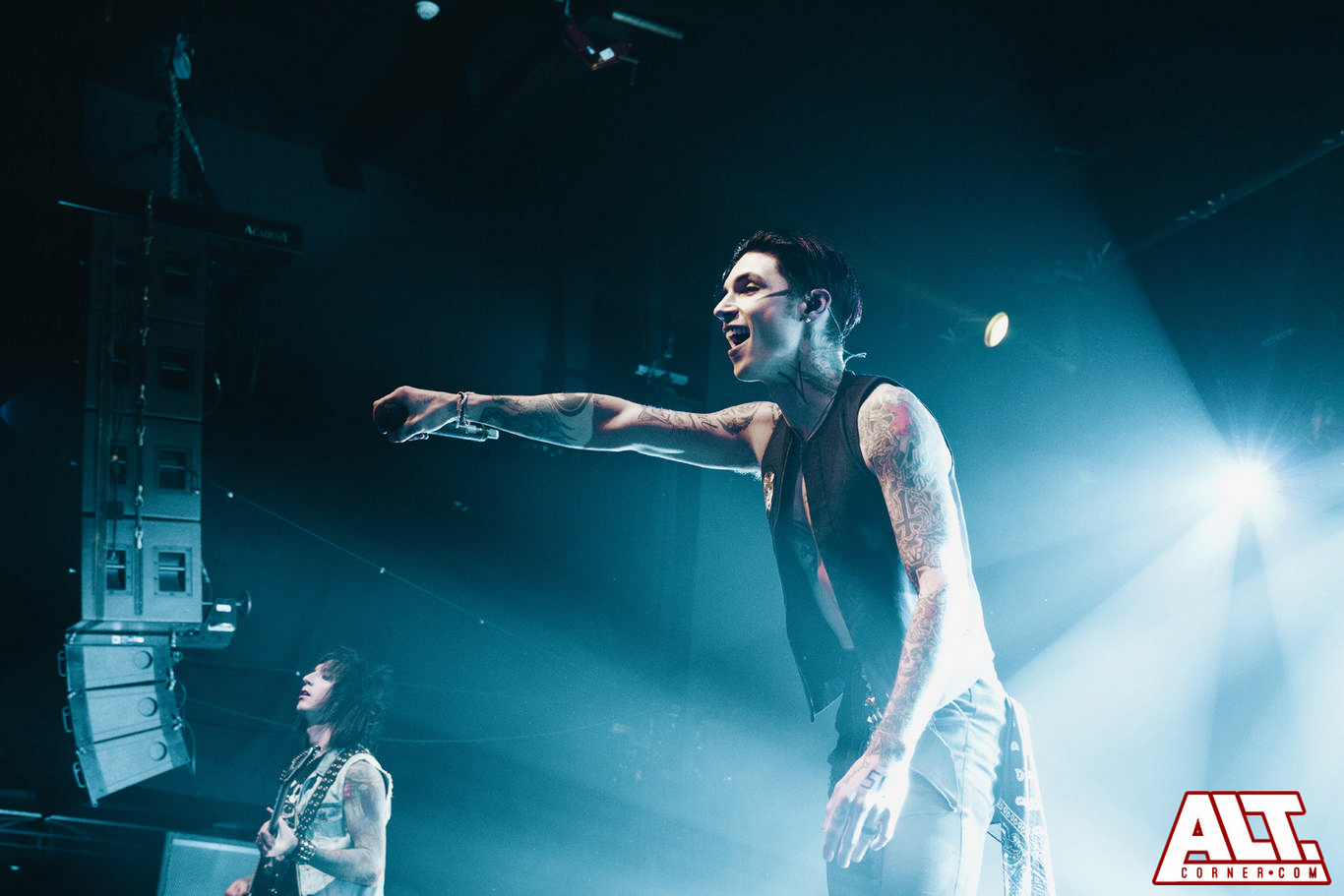 Tonight saw Asking Alexandria and Black Veil Brides– with excellent support from German sextet To the Rats and Wolves – descend on Manchester. Outside the Academy 1 venue, fans queue eagerly for hours – a fair few sporting black face paint in homage to BVB. Whilst the need for increased security is understandable and necessary, the rigorous checks unfortunately meant that opening band To the Rats and Wolves played to a mostly empty room for most of their set, starting just ten minutes after doors. Having personally not listened to them before, I was instantly taken with their brand of infectious metalcore blended with anthemic, almost pop-y choruses and melodic sing alongs; combined with synth and electronic elements it makes the show an interesting one as the band steam through five tracks in all. Closing track Anywhere for You (‘this is actually a pop song!’, jokes vocalist Nico Sallach) peaks the interest of the masses trickling steadily through security and into the venue and the band’s request for crowd participation is met with a warm reception. Even with such a short setlist, I – no doubt like so many others – am left feeling that I may go anywhere for To the Rats and Wolves.

Almost immediately after To the Rats and Wolves’ whirlwind performance and subsequent exit, tension builds for the imminent arrival and return of Danny Worsnop’s Asking Alexandria. This is aided by a steady and insistent throbbing hum of speaker feedback and white noise, which is felt as much as it is heard. Although it felt like an eternity, it was probably closer to twenty minutes before the band finally burst on to the stage. With a veritable arsenal of music to choose from – just don’t mention ‘the fourth one, the wasn’t me one’, though, okay? – Asking Alexandria plunge into their set via new single ‘Into the Fire’, which elicits a much more positive crowd response than I had anticipated. Danny seems only to be warming up, though, and the band soon draw from their heavier, older work, immediately following up with Killing You and To the Stage. The crowd’s already considerable and impressive response, though, seems dwarfed when the opening notes of track six reveal themselves to be The Final Episode (Let’s Change the Channel), arguably AA’s most popular hit. The band grin as they hear the crowd already screaming ‘oh my god’, and Danny soon follows suit, aided by an impressive show of lyrics on the large electronic screen behind them and an ever impressive display of punctuating lasers and lights. The crowd, to put it mildly, lose their minds.

New track Vultures and an acoustic re-working of Someone, Somewhere  bring the energy back down to a simmer before the rowdier Eve and anthemic ear-worm Where Did it Go? are hammered out; ‘fuckin’ good, right?’ Worsnop cheekily – and accurately – quips of the new material. The band then end triumphantly on three old favourites and Danny truly shows off his vocal range and strength, holding notes which are exhausting to listen to – let alone sing. ‘Baby I’m baaaaack’, he exclaims, and there’s no denying it. He has made that clear tonight, and Asking Alexandria are once more complete and on top collective form, with flawless performances from all – even though Danny may occasionally dominate. Danny, however, is unapologetically, well, Danny, and he may well have a right to be after the performance he just led his bandmates in.

American quintet Black Veil Brides now, frankly, have their work cut out to match that performance; it is not just Danny’s return marked by this tour, but also BVB’s, after a three year absence and the tension is palpable. Judging by the ear-splitting (predominantly female) shrieks that accompany frontman Andy Biersack’s first syllable, they may just achieve it. For the first few tracks, vocals seem to be suffering and Andy implores the audience help him out, with which they are only too happy to oblige. At one point, he does however, joke that they ‘may be the only band in rock history where the crowd has to sing the entire song’, a statement which inevitably raises a few older eyebrows.

Only three tracks in, new, anthemic track Wake Up is played to yet more screaming. (At this point I’m wondering if the screaming will ever end. Spoilers: it doesn’t.) This track proves a hit with fans both young and old(er) and will surely prove to stand the test of time amongst BVB’s setlists. The pace is slowed for another new track; When they Call my Name and a nostalgic montage of personal band footage, band shoots and finally magazine covers are shown on the screen above. Twenty years ago this might have been a classic, swaying, lighter-up moment. Follow up Shadows Die allows Jinxx to showcase his impressive skills on his violin (‘hashtag Violin Jinxx’, proclaims Biersack’). The band are all playing well as a unit; their hiatus long forgotten already as they drive towards the climax of the show and the inevitable inclusion of more of their older work.

‘Scream, shout’… as if the crowd needed any more encouragement. A venue full of fallen angels dance and scream along, barely giving Biersack a chance. If I thought this a frenzied reaction – which it was, it really was – it (almost surprisingly) is nothing compared to final track In the End, which sees many a voice in the crowd crack with emotion and effort. It is clear that three years away has done nothing to quell the BVB Army’s passion, and tonight they did the band proud, who, in turn, certainly did not let their loyal fans down with a passionate and heartfelt performance; a performance to truly bring Manchester together if for one night. Here’s to hoping they don’t leave it for so long next time.