As It Is – Never Happy, Ever After

As It Is are about to release debut album ‘Never Happy, Ever After’ and we were lucky enough to have a listen to it and give our thoughts on this upcoming release… 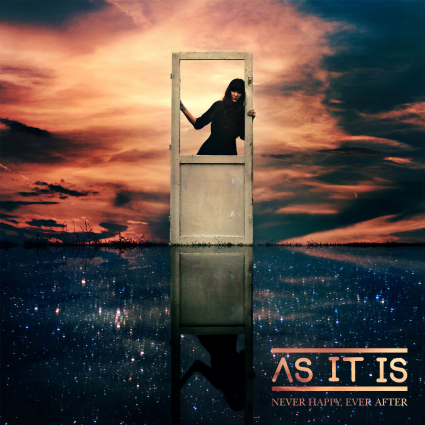 As It Is are a pop punk band from Brighton via Minneapolis. Lead Singer, Patty Walters shot to fame with a decorated YouTube channel which at present boasts over 400,000 subscribers. However, being in a band was Patty’s goal and As It Is was his way into doing what he always wanted to do.

The decision to stop his YouTube channel and apply himself to being a full-time musician and band member was met with mixed responses. His fans from his videos were split, some hurt, some supportive. Not to mention the backlash as some self-professed seniors of Pop Punk ridiculously couldn’t accept someone who used YouTube as a kick-starter for a music career although, many musicians had done it before Patty.

Fast forward to present day and As It Is have amassed a quite remarkable following as they’ve ventured through quite a meteoric rise. ‘Never Happy, Ever After’ is the five-pieces debut full length and any album that features singles such as ‘Dial Tones’ and ‘Concrete’ is on its route to being a great album.

The album continues their trademark of sad-tinged pop punk with relatable lyrics and catchy choruses but it’s the step up that As It Is have made for this album which makes it impressive. Being a Pop Punk band, you are very much swimming alongside a dozen bands who sound so similar to yourselves which leads many people to find it hard to tell bands of that genre apart. However, As It Is have continued to redefine and develop their sound, using Patty’s exquisite soft-hitting voice and merged it with Ben’s vocals that create a Pop Punk answer for Alexisonfire.
Tracks like ‘Dial Tones’ and ‘Concrete’ provide a slab of classic formulae Pop Punk that are familiar but are revitalised to create perfect summer time anthems. The change-up of tone and speed that is impressive in tracks like ‘My Oceans Were Lakes’ and ‘Drowning Deep in Doubt’ is another thing that they do so well. Another stellar thing that As It Is do is that the tracks on the album don’t sound like variants of one song idea alas many other bands within this genre, they are unique yet familiar even if the lyrics sometimes drift towards more Busted than The Story So Far.

The standout tracks of the album are quite easily ‘Can’t Save Myself’ – a perfectly relatable and written track that is reminiscent of Fall Out Boy From Under The Cork Tree Era mixed with the soft Sum 41 infused punk passion.
‘Dial Tones’ is probably one of the catchiest tracks I’ve heard this year, within one listen I was already singing the chorus and annoying everyone in the office with my (not very good) Patty Walter’s impression. It’s one of the best songs I’ve heard to be released as a first single for an album for a long, long time and ‘Dial Tones’ as a prequel for the album is fitting and perfect for what is to come.

Now, I am pleased that As It Is found the midpoint amongst their style in correlation to their fanbase which is heavily swayed towards a younger audience but, it’s commendable that they’ve created an album that will appeal to all ages. The direction they could of gone could have been something that would please a younger audience but the longevity of the release would ultimately of been hindered. Luckily though, they pulled it out of the bag with ‘Never Happy, Ever After’ and in the process revived my interested and passion for Pop Punk.