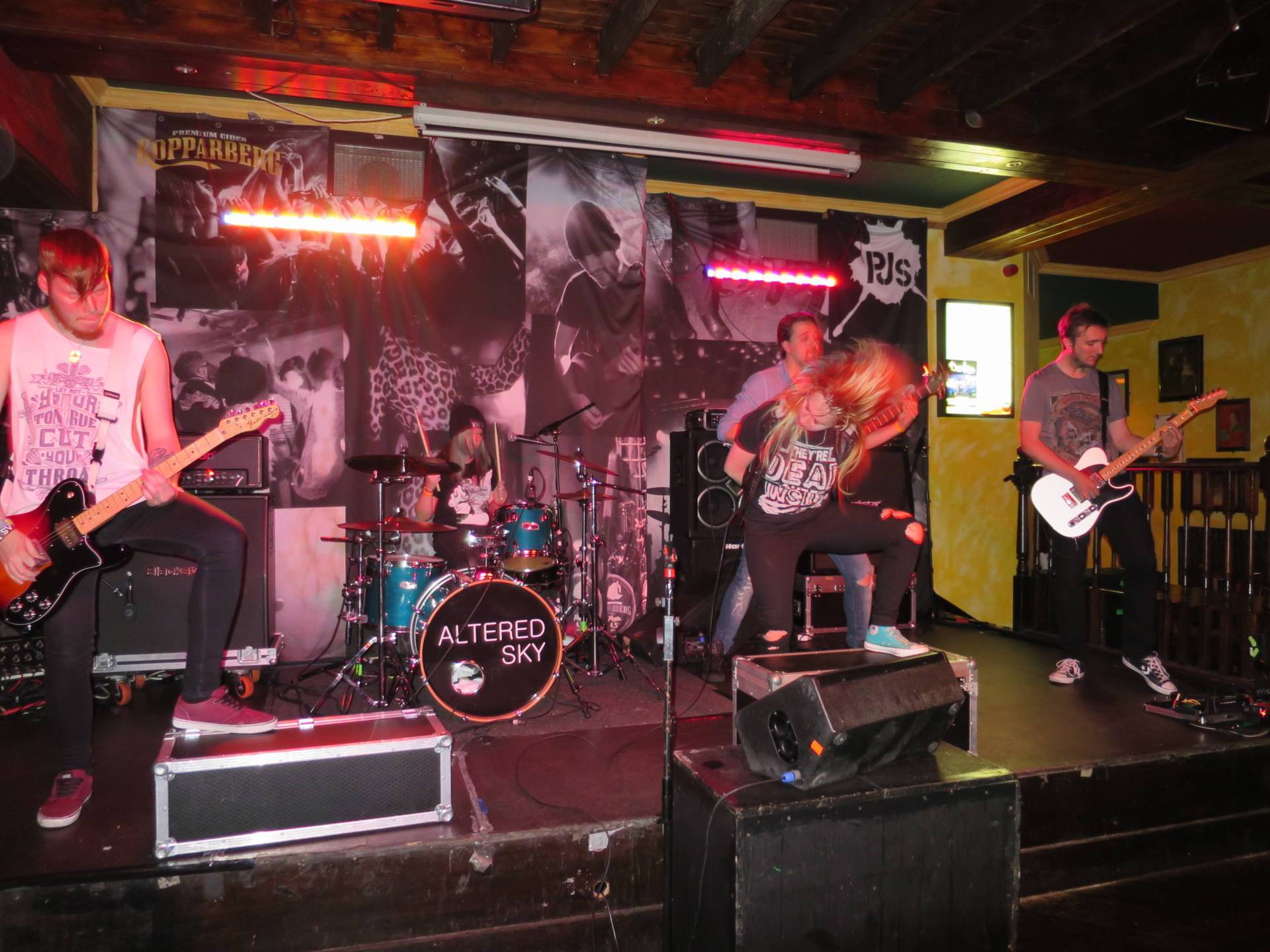 First stop of the weekend was La Bella Angle, Edinburgh. This was a nice venue even if it is a bit hidden. I feel if this venue had been in Glasgow it would have been packed tonight, but being where it was it was great.

The first act I saw on this weekender was actually an acoustic act; Alex Maxwell plays an acoustic folk with an indie vibe, (they normally play with a full band but tonight it was just him). It was good to actually see a Scottish acoustic singer with a Scottish accent when singing instead of put-on American accent. He played a lot of confession / self deprecating songs and he was a good opening act and well worth going down at doors to see.

Next came A Modern Masquerade, a three piece poppy rock band. Their sound is in effect a two piece as their is the singer, a guitarist and a drummer. I am not sure why they are set up like this, the singer did take the mic off the stand but didn’t really move around as he he suffered from S.I.T.M. (stand in the middle) syndrome. They need to work on their on-stage banter, tonight he messed up what he was going to say at the start and this threw him for the rest on the night. Determined not to let this fault their whole set, A Modern Masquerade played an interesting set with minimal mistakes. It was clear to see that this band possesses a great deal of talent notably, when their sound got heavier they brought out a second guitar which was used for the last two tracks. In my opinions, I think they should play like this always as it is clear to see the singer can play very well and it added another dimension to the band.

Altered Sky started off their set with a strong high-octave energetic song ‘Livewire‘, instantly getting the crowd fired up. Ana during this song did one of her now trademarked jumps, landed awkwardly and ended up on her back, but continued to sing all through this. Jumping into their next song which is slowly becoming my new favourite song ‘Stupid in the Dark‘ , a track full of meaningful lyrics, hidden meanings and heavy guitars. With ‘Where I Belong‘ next and being one of their best know songs the crowd were singing along and even took over lead locals at one point when Ana left it to the crowd to sing “If I closed my eyes would this still be a fairy tale.”  When Ana announced their next song was ‘Apple Tree‘ there was a clear ‘Eeee’ from the crowd, showing this to be a clear fan favourite.  Every singing person in the crowd was singing along and jumping. However, about halfway though this song I think one of the subwoofers decided to go the way of the dinosaurs. From this point on the bass was really tinny and ruined the rest of the set. They then went into ‘White Which‘ a song they had not played with a full setup live before. I was really excited for this song when I heard about this song, I knew it had been inspired by Ni No Kuni and I was not disappointed. With the bass sounding tinny and the track being new, they lost the crowd slightly but without the subwoofer issue, this song will surely go onto be one their best yet. Jumping into ‘Live for It‘ which has a very radio friendly sound won back most the crowd as they were singing and dancing throughout. They then slowed things down with the highly emotional charge; ‘Song Bird‘. This song has a greater meaning to Ana and every time I see her perform it she looks like she is going to cry and I struggle to watch her during this song as I get emotional during this.  Following this with ‘Waves‘ which is a huge departure from the rest of their songs. This melancholy song has none of the happiness or the upbeat feel like the rest of the set and left a sad tone in the room.  They finished the night with their latest single ‘Bury It All‘ which had everyone singing, jumping and dancing. This brought me back to why I love seeing Altered Sky live, I left feeling happy, with a smile on my face and humming the tune all the way home.

Next stop this weekend was a quick train journey to The Bungalow Paisley. I love little venues like this, the perfect venue to hear bands that are cutting their teeth. Being the size it is you get to hang with the bands before they go on and I spoke to Life On Standby and Altered Sky at length at this gig and even played pool with them before they took to the stage.

First up were Life On Standby and I am not sure if it is something I said to them before they went on stage or something subconsciously guiding them but they really moved around and owned the stage. It was not just Erin the singer but the guys also, especially the Gavin on guitar. Despite a few technical issues at the start of the night, which saw Gavin swap his guitar twice they really went for it tonight. This rock outfit have some really super catchy guitar riffs but the key to this band is the vocals of Erin who can really sing and I mean sing…what a talent! She can serenade you or she can take her voice to a deep gritty sound without having to scream and for me, makes her absolutely superb.

Altered Sky rocked up to the stage and gave a really energetic performance. The set list was the same except ‘Waves‘ was removed. They was no subwoofer issues so ‘White Witch‘ sounded awesome and there is good message in the song. It’s is unusual to see them play as a headliner at an 18+ venue but, these gigs always feel more intimate to me. They seem to relax more in their performance but of course, it never stops Ana flying across stage giving it 300% and I left the gig wanting more, already excited for tomorrow.

Last stop of the weekend was Dunfermline. It was strange driving here in the light, I have only ever driven this way in the dark with the glow of the incinerator in the distance. Heading into PJ Molloys, it is a nice pub with a proper old cinema ticket box on the way in. The stage is down the stairs at the back which gives a great atmosphere and panoramic view of the stage. This is a proper old school venue and has the feel of underground/grass roots music.

First up were a three piece indie band called Auxygen. They had a lovely underground sound. A sort of sound that makes you want to hear more. Technically they were good with awesome vocals. However they could have done with some backing vocals for me to add more of an emphasis on their lyrics. Their was only the lead singer and as good as his voice was he was not Kelly Jones. This band have serious potential though, so I will be keeping an eye on their development.

Up next were a very young looking band, Fear The Rapture. They provided a heavy old school rock/metal guitar sound with screaming lyrics. You could tell what they are trying to aim for with their sound but, they need a little more practice to hone their skills. They could do with longer guitar leads as I felt they were going to pull them out at any moment throughout their set but was left disappointed when they didn’t. A few covers thrown in gave a taste of their potential. I, however was not a fan of their screaming, nothing personal on the band it is purely my preference. They brought their friend on stage for one song to play with them and it was a real treat, I think they should add her to the band and be a five piece.

Lost in Vancouver provided a good indie rock sound. They were not afraid to play at high tempo which gave them a unique feel. The singer despite being from Scotland sounded northern almost like a mancunian. Great sound throughout and loved the switches in tempo between verses and choruses. They provided something different tonight and I feel like I need to see them again to put my finger on what their sound is.

For the last time this weekend Altered Sky took to the stage. I found it strange but then again, I always find it strange to see a band in their own merch and tonight Ana was rocking one of their “They’re Dead Sure Inside” Tees. Although, it didn’t distract me from the performance and also I, myself had worn a different Altered Sky Tee to all three days of this weekend. Once again, Altered Sky came out all guns blazing with ‘Livewire‘ and had the same set as the night before. This set it up for a amazing night, with Ana giving a shout out to the fans (including me) by name. All of them on stage were giving it everything they had and by the end of ‘Bury It All‘ I was wanting just one more gig. They are by far my favourite live band and I can’t emphasize enough how you need to see them live.  Also Ana and Amy, I am sorry we got lost in Dunfermline and didn’t find any chocolate.