Victories at Sea are set to release their debut album ‘Everything Forever’ on 30th October. 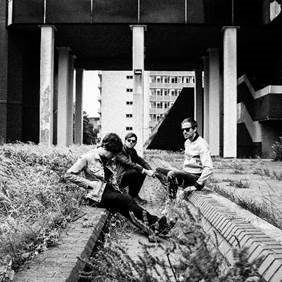 Victories at Sea are set to release their debut album ‘Everything Forever‘ on 30th October.

Emerging from the concrete paradise of Birmingham, Victories at Sea fuse a vivacious combination of brutalist electronic hooks, soaring post-punk guitars and dolorous wordplay. After recently being championed by the likes of the NME, The Guardian, Clash Magazine and XFM’s John Kennedy, now the band are releasing their debut album, ‘Everything Forever’ via Static Caravan Recordings.

Written over the last two years at an abandoned steel works in Digbeth, and recorded in the damp basement of an old whistle factory in the depths of the city’s industrial Northern quarter, embracing the darker sounds and subjects was inevitable. But with lyrics that often touch on matters of love, loss, and loneliness, this is a record born from a cathartic affection of hope and escapism. it is also a thrillingly taut and danceable journey, the band have toured their disco-noir extensively in the UK and Europe, earning the respect of their fans and contemporaries alike. Their debut EP ‘In Memory Of’ gained the band the attention it deserved, particularly via 6music, and in turn built the perfect foundation for the anticipated album to follow.

They’ve influences that range from Mogwai to Factory Floor, Slowdive, through to The Chameleons, but Victories at Sea are far more than just the sum of their parts, with original, exciting songwriting that never loses its pop sensibilities.

‘Everything Forever’ is out via Static Caravan Recordings, and having already secured themselves a placement as one of this years “ones-to-watch” supporting Editors on tour in October, Victories at Sea are looking to the future, one that far surpasses that of their humble industrial roots intertwining them within the very city they crave to escape.