There is a lot of bands announced For Warped Tour UK and you’re probably wondering who to catch. So Elizabeth made it her job to give you a few bands who you NEED to see when the time comes on the 18th October. 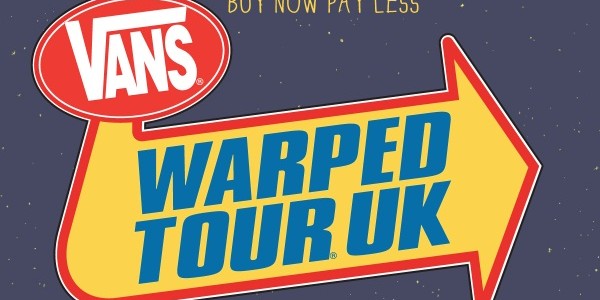 So it’s official, Warped tour UK is officially upon us. But if you’re on the ball in thinking that it isn’t October yet, then you are correct, however, the Vans Warped tour hit London’s Brooklyn Bowl at the O2 on Monday for the official kick-off party and I was one of the lucky ones who got to attend a night of various bands on the bill bowling in a hilarious punk rock bowling tournament and performances from Tigress, Roam and Moose Blood and an acoustic set from Ghost Town alongside DJ sets from Kerrang’s Alex Baker among others.

So how did it all go down? Well Tigress’ first public performance went down a treat amongst the lucky competition winners, Ghost Town’s acoustic set calmed everyone down however it was an incredible performance before those little rascals in Roam amped it up with their ever energetic set before one of the bands to watch in Moose Blood were left to close the show with an enthralling set.

So onto the main event. Now there is a lot of bands announced and you’re probably wondering who to catch. So it’s my job to give you a few bands who you NEED to see when the time comes on the 18th October.

This gothic quintet have been on a meteorical rise over the last year with slots at Download, 2000 Trees, Takedown and Hevy festivals among others and support slots with Moose Blood, The Misfits and then embarking on tour with Frank Carter & the Rattlesnakes post Warped tour! Their debut EP from Roadrunner Records The Callous Heart has gained them a new legion of fans with its airplay on Kerrang radio. Creeper’s live shows are not one to miss either! They’re energetic, leaving everyone enthralled from the intro (I won’t spoil it for you) right through to the close and show punk as it should be.

The Yorkshire lads will be bringing a psychedelic revival to the grunge scene that has seen them backed by the likes of Kerrang, Rock Sound and Radio 1 as well as tours with the likes of Lonely the Brave and Enter Shikari. In 2015, they have graced the stage at Hit the Deck festival, Download festival and 2000 Trees. The hypnotic vocals over bludgeoning riffs and energetic live show make for a band that are not to be missed!

Now I know the main aim of this is to give you a heads up on the less well known bands but Asking Alexandria have to be included on the basis of their new vocalist. Due to VISA problems, the bands original homecoming shows with new vocalist Denis Shaforostov had to be cancelled, meaning that Warped UK will be their first performance on British soil with the new line-up. They set Warped tour USA alight with it being clear that Denis is much more than just Danny Worsnop’s number 2, he’s brought a new life to the band, with vocals that range from beautiful, entrancing melodies to gut-wrenching growls the live shows are a breath of fresh air (and this is only from me trawling through YouTube watching videos!).

Another of the quite well-known acts on the line-up, however recently the band have been showing their critics that they mean business with their new sound. Branching away from their incredible Grandomina inspired concept albums, the band are heading into the real world with stand-alone singles Danger and Braindead following a true alt-rock style helping to increase the quintet’s legion of dedicated fans. Their Warped tour UK appearance will directly follow a stint in Europe supporting Annisokay and precede the release of mini-album Bruises (out 23/10/2015) and will surely help the fan campaign of getting them on the bill for the US Warped Tour next year (check out the hashtag on Twitter to get involved – #FVKWARPEDTOURUSA2016 ). Their entrancing sets of riffs galore, keys and intense yet beautiful vocals from both vocalists ensure that they are one set you do not want to miss!

Last but not least, American quartet The Word Alive have taken the world by storm. About to embark on an Australian tour with Parkway Drive, Thy Art Is Murder and Memphis May Fire which ends just before their stint at the show, it tops another great year for the Phoenix born band who have enjoyed a meteoric rise since their formation in 2008. From tours with the likes of Killswitch Engage and A Day to Remember, to several stints on Warped Tour USA (including this year). Their third album Real, is a sure fire success that will gain them many more fans to join the diehards who have supported them from the offset. Incredible guitar riffs and real vocals provide the basis of an excellent live show.

So there’s my top 5 picks of the line-up. Make sure you check them out and let us know what you think! Also don’t forget to check out the rest of the bands as you never know, your new favourite band could be there!