British Alt-Rock metal outfit Fallen To Flux have returned and are aiming for the jugular of the UK scene, armed with their stunning lyric video single for ‘Anchored’, taken from their forthcoming debut album ‘Transitions’, which lands this Summer. 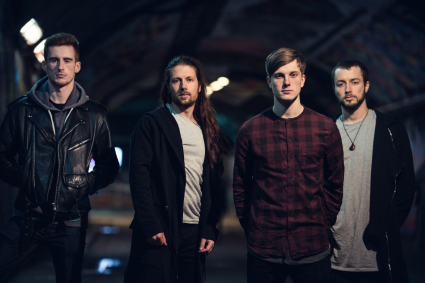 British Alt-Rock metal outfit Fallen To Flux have returned and are aiming for the jugular of the UK scene, armed with their stunning lyric video single for ‘Anchored‘, taken from their forthcoming debut album ‘Transitions‘, which lands this Summer.

The single is a forceful state of intent which stays true to the band’s origins, as metal fans reared on Bullet For My Valentine and Killswitch Engage, and also highlights the quartet’s growing songwriting maturity and progressive technical craft.

The beginnings of Fallen To Flux can be tracked to 2012, when the band released their debut EP ‘Piece By Piece‘, which was followed by their first tour. This first release and tour provided a bedrock for the young rocksters. The quartet then spent the next two years working together on 2015’s ‘From The Outside, Looking In‘ EP. The record, showcasing a more developed approach to songwriting fused with a widespread appeal, saw London’s O2 Academy2 completely packed out at the EP launch show. A debut festival appearance at Camden Rocks 2015 and a second UK tour shortly after only served to expand the crew’s dedicated fan-base right throughout Great Britain.

Last year, the band solidified their line-up with Oli Clipsham (Vocals & Guitar), Björn Gugu (Lead Guitar & Synths), Luke Walley (Bass), and Declan Brown (Drums) and commenced work on their debut album Transitions. The writing sessions were long and the Londoners spent the entire summer in Oli’s garden shed, sleeping between amps, keyboards and other instruments, and working day and night on the record. This Summer, Fallen To Flux will finally drop ‘Transitions‘. Reaching new realms of creative expression, the album far exceeds the band’s earlier work, and truly reflects their development as individuals and a troop. The four piece have spewed their heart and soul into this release and it’s tangibly evident. This is a band and record that you need in your life.