So, what are the top 10 releases of the year? I hear you ask, well sit tight, and I’ll take you on a journey through 2015’s best pop-punk/pop-rock releases! 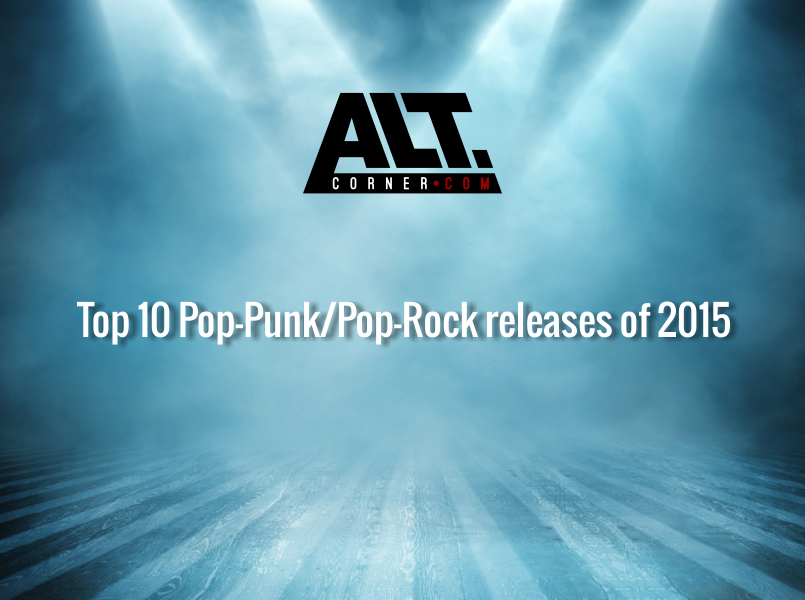 So it’s that time of year again, the nights are drawn in, its cold and all you hear is the same generic festive music everywhere you go… Yes it’s December which means Christmas, BUT it also means its awards time. There’s been hundreds of releases across the genres this year and pop-punk has been no exception. In fact, the pop-punk/pop-rock genres have taken over this year in a resurgence many have been waiting for since the 2005 era.

So, what are the top 10 releases of the year? I hear you ask, well sit tight, and I’ll take you on a journey through 2015’s best pop-punk/pop-rock releases!

Okay, this is not your average pop-punk release but the Florida quartet followed up the 2014 release of mammoth sophomore album Duality with a series of the album tracks reworked into an acoustic EP. While it isn’t exactly a pop-punk style, it truly showcases the incredible vocals of frontman Cody Carson and the talent the quartet have in a stripped back environment. Plus it contains a very relevant message with bonus track Wild Wild World, which in light of current events around the world, is a track that maybe people should be listening to.

The light-hearted album trumps their 2013 counterpart Hoser. While the sound may be similar, the riffs are bigger, the energy is abundant and the melodies and lyrical content are a lot more mature. With some acoustics including the opening bars of album opener Slam and the middle track Stubborn Love show that this is definitely not a one-trick pony and is a definite must-have for the pop-punk enthusiast in you!

Trash Boat aren’t your average pop-punkers, choosing to ignore the stereotypical pizza and parties themes and focus on the more relevant themes of life and its many struggles. The EP is a prize anthemic release, full of massive riffs and catchy hooks while keeping in Perspective (pun intended) via relatable lyrics. Lead single Perspective is catchy and one you could listen to on repeat and not get bored of it. Closing track Eleven is pop-punk gold! An explosive start, sing-a-long middle and true anthemic end. An EP that would transfer well into the bands energetic live shows.

As It Is have had quite a big fanbase from the start, following frontman Patty Walters’ YouTube fame, however, that is by no means the only reason they have a huge fanbase! They had a very successful time on Warped Tour and the release of Never Happy, Ever After saw the band rise further. Lead single Dial Tones is full of beans and you’ll be singing it for weeks on end. You, the Room & the Devil on Your Shoulder is a closing acoustic track that talks about loneliness with beautiful vocals. Drowning Deep in Doubt has catchy refrains which contrast with the deep lyrics. While a pop-punk record, this is definitely a lyrically dark release.

Fall Out Boy are a lot more pop than rock these days but the album American Beauty/American Psycho has massive tunes to suit the pop and the punk in you. Immortals has a rock melody but poppy lyrical overlay. Uma Thurman was the tune of the summer with its almost techno, happy-go-lucky feel. While many people (myself included) preferred the old FOB, after listening to the album, the band are still super-talented and this album is a perfect one to enter the mainstream charts to bridge the gap between mainstream and alternative.

State Champs have had a big year and Around the World and Back is proof of the hype. Closing track Tooth and Nail is one of the best tracks on the album. Title track Around the World and Back is an acoustic (which seems to be the norm in the pop-punk world this year) that talks about facing fears and falling in love and shows the talents of vocalist Derek Discanio and guest vocalist Ansley Newman of Jule Vera. Lead single All You Are Is History is a literal pop-punk anthem with its big riffs and high energy.

What happens when you put a professional wrestler, a childrens author and the head of a not-for-profit organisation in a studio? Well a lot of things can happen but luckily for the South Wales trio, the product was this conceptual monster of a release! Heavily influenced by Blink-182, opening track A House That’s Not Quite Home opens with a television broadcast before catchy refrains and gutsy riffs provide the basis for the again Blink-esque lead vocals with the odd harmonious All Time Low feel. The tactful drums, intricate riffs and dual vocals provide a pop-punk release that’s heavy on the catchy pop hooks.

All Time Low have taken over the world and been the leaders in the pop-punk revolution. 2015 was a massive year for the band, kicked off with this massive album! Receiving plays on mainstream Radio 1 is very rare for any act in the alternative world but 2015 has seen the band featuring with tracks such as the massive Runaways, Something’s Gotta Give and Kids in the Dark. The album also features Mark Hoppus from Blink-182 and Joel Madden of future touring buddies Good Charlotte. While the band may have musically matured with age, the long-waiting new kings of pop-punk still keep some of their tongue-in-cheek lyrics while delving into the darker topics of the world. Opening track Satellite is a sombre opener with a big drum presence that shows the bands lyrical maturity.

So some of you are probably thinking 5 Seconds of Summer are a pop band or aren’t credible because of the whole One Direction touring and stuff but if you listen to this release, you can’t deny that they are very much a pop-rock band. The opening track Money is very much an old-school All Time Low influenced track. Lead single She’s Kinda Hot is a great track to cross the bridge between 2014’s self-titled release and the new album. The Girl Who Cried Wolf is very much a ballad and shows the maturity in the bands songwriting. Most recent single Jet Black Heart is an emotional track dedicated to the fans. Whether you like the band or not and whether you think they class as a boyband (which in reality they don’t) or as a pop-rock group, you can’t deny the talent the quartet have both musically and lyrically with their catchy hooks and massive refrains. There is also a Good Charlotte influence with the band teaming up with the Madden brothers to work on the songs. Sounds Good, Feels Good is the album that is sure to turn their doubters into fans or at least to be able to tolerate them.

Best pop-punk album of the year has to go to Wrexham pop-punkers Neck Deep. The band have become leaders in the new wave of pop-punk, saying goodbye to pizza, parties and girls and hello to life struggles, relationships and hard times. This was one of the most anticipated releases of the year in the alternative music scene and the band did not disappoint! Riffs galore and highly influenced by the likes of Blink-182, this is a classic album from the off with Citizens of Earth bringing the punk right the way through to sombre hit December. This is the album that got everyone talking in a good way this year!