The Association of Independent Music (AIM) and Best Before Records will return to The Great Escape festival to represent heavy music for the second year running. Now partnered with Scuzz TV, the ‘Scuzz UK Throwdown’ showcases will be held over two days at Volks in Brighton. 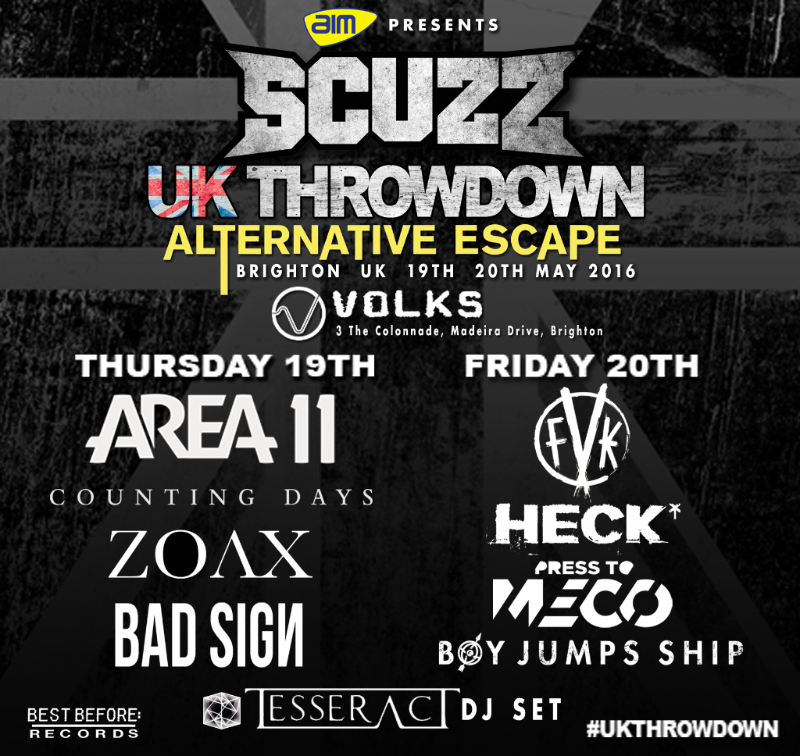 The Association of Independent Music (AIM) and Best Before Records will return to The Great Escape festival to represent heavy music for the second year running. Now partnered with Scuzz TV, the ‘Scuzz UK Throwdown’ showcases will be held over two days at Volks in Brighton and feature eight of the UK’s hottest up and coming heavy bands. Entry is FREE!

As the only dedicated heavy music event, ‘Scuzz UK Throwdown’ is part of The Alternative Escape, the official series of showcases that take place alongside the core festival programme at The Great Escape.

Area 11
Area 11 are a four-piece rock band from Bristol, UK, formed in 2011. Despite existing “under the radar” as far as the mainstream and music media is concerned, the band has amassed the kind of social media following that would put artists considered many times bigger to shame, enabling the band to sell out shows, records and merchandise runs in quiet semi-anonymity. Their most recent EP Underline debuted at number 8 in the rock charts.
http://www.area11.band / Facebook

Counting Days
Having formed in London in 2014, Counting Days entwine a complex and ferocious blend of hardcore punk, thrash and British heavy metal which has already marked them out as one of the most exciting and talked about metalcore acts in Britain. Made up of former members of TRC, Heights, Rough Hands and Last Witness they harness the power of their previous bands and bring it to an exhilarating new level.
http://countingdaysmusic.com / Facebook

Zoax
With riffs heavy enough to tilt the earth off-axis and more hooks than a night in with Mike Tyson, London rockers ZOAX have built themselves quite the reputation since forming in 2013. Landing a record deal early on for two EPs, the quintet recently released their debut album via Mascot Records.
WWW.ZOAXOFFICIAL.COM / Facebook

Bad Sign
Bad Sign are a three-piece Rock band from Croydon, South London who formed over a mutual love of honest, passionate music. Since releasing their ‘Destroy’ EP in December 2014 they have toured relentlessly sharing stages with the likes of While She Sleeps, Skindred, Cancer Bats, Arcane Roots, The Xcerts and Devil Sold His Soul, as well as making appearances at festivals such as Hit The Deck and Tech Fest. They are now signed to Basick Records.
Facebook

FVK
FVK are an unstoppable force in modern British Rock, boasting a fiercely loyal fan community through their creative world. From their concept albums Militia of the Lost (2012) and Unbreakable Hearts (2014), through to charting (#14, UK Rock chart) mini-album Bruises, the band showcase a rare creativity going above and beyond their music.
http://fearlessvampirekillers.com / Facebook

Heck
Rising from the ashes of the unstoppable wrecking ball that was Baby Godzilla is the re-christened Heck. The name may have changed but the aim remains the same, to deliver the same level of white-hot deranged brutal noise and create wide-spread pandemonium in venues, fields and tents across the world.  Following EPs Npag (2010), Oche (2012), and Knockout Machine (2013), Heck have just released their debut full-length ‘Instructions’ to critical acclaim.
http://www.abandcalledheck.com/ / Facebook

Press to Meco
Press to Meco are a trio on a relentless pursuit to harness their sound into a punchy, driving and visceral powerhouse. Finding inspiration in diverse sounds as SikTh, The Dillinger Escape Plan, Reuben, Deftones, ABBA, and Michael Jackson, the band are the perfect synthesis of technical proficiency and attention grabbing bursts of energy. They are a progressive hardcore rock metal pop [insert genre here]band hailing from Crawley/Croydon; performing off-kilter, unreasonably catchy songs, full of twists and turns.
http://www.presstomeco.com / Facebook

Boy Jumps Ship
Hailing from the North East of England, Boy Jumps Ship are a gang of working class lads playing anthemic, guitar-led alt-rock laden with honesty and integrity. Writing and playing music about real life, they instantly connect with their audience, honing a reputation for being one of the most energetic, passionate and exuberant live bands around. With their debut album, Wake Up, due to drop in April, 2016 is set to be a huge year for the band.
Facebook

The ‘Scuzz UK Throwdown’ showcase will also feature a very special DJ set from prog-metal titans TesseracT to round off what will be the biggest ever heavy music event in the history of the long running festival.